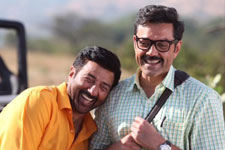 T J Reddy / fullhyd.com
EDITOR RATING
3.5
Performances
Script
Music/Soundtrack
Visuals
5.0
3.0
4.0
4.0
Suggestions
Can watch again
No
Good for kids
No
Good for dates
No
Wait for OTT
Yes
The interesting part about watching/reviewing a film after its opening weekend is that you go in knowing an audience's reaction to said film. Shreyas Talpade's directorial debut Poster Boys opened alongside Arjun Rampal's writing debut Daddy. Only very few would have predicted that Daddy would be soberly trounced by the former, and even those few might have forgotten a little movie titled Yamla Pagla Deewana.

While I wasn't a fan of that distinctly Deol-flavoured comedy or its sequel, I was too scared of Sunny paaji's Dhai-Kilo-Ka-Haath to say much about it then. Now that I am a bit older, a bit wiser and a bit faster (I'm sure I can outrun Sunny paaji), I sat myself in a nearly empty cinema hall and subjected myself to a full-fledged, slightly altered, cinematic version of that one Subway ad Joey Tribbiani found himself in on season 1 of Friends.

Unlike Joey who found himself on an ad for venereal disease, The Brothers Deol and Shreyas Talpade who are an army man, a school teacher and a recovery agent respectively, find themselves on a poster for a vasectomy ad without their prior approval. This freak occurrence spirals their lives out of control as their humble community dislodges marriages both current and soon-to-be, and all three men attempt to clear their good names in conjunction with trying to educate the audience about the procedure.

Good plan. But to paraphrase Dr. Alan Grant, terrible things begin with the best of intentions.

With a whole town taking this poster as seriously as the ones announcing the onset of the plague, I was led to ask a few questions of the film unfolding in front of me. The simplest one being, if Vinay Sharma (Bobby Deol) has a significant other, can she not vouch for the fact that her husband's swimmers are safe in their dressing room? Apologies for my crassness, but getting a vasectomy is not a cut (that hurt me in the family jewels) and dry process. There are a few days of recovery post-surgery. Is his wife so unobservant or are they so under-sexed that she rarely if ever pays attention to her husband's "soldier"?

Abundant lapses in logic like the one above combined with multiple bouts of juvenile humour are what take away from Poster Boys' socially-conscious cinematic offering.

While Shubh Mangal Saavdhan (which is currently in theatres) strikes a seamless balance between comedy and drama with respect to erectile dysfunction (without even uttering the words) for most of its runtime, Poster Boys finds itself lost amid a volley of simplistic euphemisms and crassness which would make my teen head spin.

This is not to say the film is all drivel. There is fun to be had even if one were to call these moments guilty pleasures. As Sunny pokes fun at the uber mensch persona permeating his films while Bobby's phone bellows "Soldier Soldier" with each incoming call, one is bound to crack a smile or two. The film is not taking itself or its topic too seriously as what it supposedly wants to do is entertain. Shreyas Talpade who produced the original Marathi version Poshter Boyz finds himself caught between wanting to tell a funny story about a subject rarely discussed and serving the Deol Fan Club, which leads to the movie being a sloppy mishmash.

Commissioned to shoulder over two hours of this tomfoolery and lack of character development, Sunny Deol and his ineptitude at the art of comedy are sorely exposed while his more buff yet slightly less manly (Sunny eats nails for breakfast, no one is matching that) brother works himself out to be the only decent part of the film. The latter's comfort at pulling off Hello Kitty pyjamas and discomfort at doing most anything else try to offset the many moments of Sunny Deol's cringeworthy pouting for selfies and cries for a protest where he goes naked.

With the products of Dharmendra's seed ruling the roost on screen, that potential-filled kid from Iqbal, Shreyas Talpade, is quietly relegated to the side as he jokes around with his cohorts while directing a wholly prosaic film that negates its characters' intents with its baffling climatic speech.

Even if the film ends on a bum note, it starts off with a bang - or more accurately, an item number, and a pretty good one at that. Start as you mean to go on was the war cry, and the movie roundly forgets this as the flat score and uninteresting cinematography aid in the energy level dipping akin to a man who was cruelly reminded of his vasectomy during his first "encounter" after the ordeal.

That statement encapsulates this film as a whole. It neither has the hump-your-leg horniness of a Mastizaade nor is it a gentle and thoughtful being like a Shubh Mangal Saavdhan. This film is stuck in the flux between the two extremes as a story which screams at you to forget its plot and entirely focus only on its message as the end credits roll.

Good plan - the only issue with that is, people listen to people they have personal connections with or feel they can relate to, be it on or off screen. A trio of caricatures can only make said people laugh at them and not learn with them. 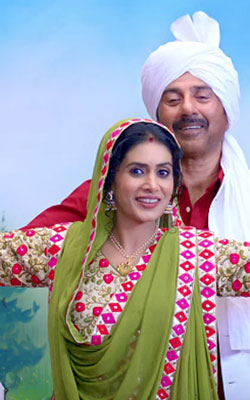 ADVERTISEMENT
This page was tagged for
Poster Boys hindi movie
Poster Boys reviews
release date
Sunny Deol, Bobby Deol
theatres list
Follow @fullhyderabad
Follow fullhyd.com on
About Hyderabad
The Hyderabad Community
Improve fullhyd.com
More
Our Other Local Guides
Our other sites
© Copyright 1999-2009 LRR Technologies (Hyderabad), Pvt Ltd. All rights reserved. fullhyd, fullhyderabad, Welcome To The Neighbourhood are trademarks of LRR Technologies (Hyderabad) Pvt Ltd. The textual, graphic, audio and audiovisual material in this site is protected by copyright law. You may not copy, distribute, or use this material except as necessary for your personal, non-commercial use. Any trademarks are the properties of their respective owners. More on Hyderabad, India. Jobs in Hyderabad.