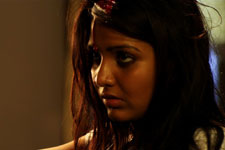 Kritika Deval / fullhyd.com
EDITOR RATING
4.0
Performances
Script
Music/Soundtrack
Visuals
5.0
4.0
6.5
7.0
Suggestions
Can watch again
No
Good for kids
No
Good for dates
No
Wait to rent it
Yes
Tense shadows, nervous lights, oppressive silences broken by startling noises, and, above all, a reasonable distance from the hubbub of everyday life - these are the staples of the horror genre, and when utilized wisely, can separate viewers from slumber. The End has all of these staples, and, at least on the face of it, seems like it means to keep you away from a good night's sleep.

And then, you start to meet the characters. There's the new spooky house in the outskirts of Hyderabad. Then there are the house's newly-wed owners Rajeev (Sudheer Reddy) and Priya (Pavani Reddy) Mathews. You meet Gautham (Yuva Chandra), an NRI with dreams of building a hospital back home, and then Rekha (Gazal Somaiah), Priya's foxy family friend (isn't accidental alliteration the absolute best?).

And then you are introduced to a host of other people while Rajeev and Priya do as newly-weds do even as the cameras try their level best to convince us that nothing good ever comes of living in the outskirts. Why were a couple of young professionals making their home in the outskirts anyway? Also, Gautham and Rekha go off to Goa to study and do some romancing of their own.

All this while, dear readers, you are coming to realize, as slowly as the film itself, that the makers have no intent of getting even close to spooking you without setting up the background and the characters to their hearts' content. Also, their hearts' content can take a long time to fulfill (or maybe just fill?).

Long story made happily short, a worker dies, and it runs out that the new wife is possessed. The hapless groom calls his best buddy to help him out, and the rest is exactly as interesting and spooky as a snail making its way past an inch.

Sadly enough, this is despite the makers' obvious proficiency with the tools to spook. Camera angles are used with flair, if not much creativity. The setting is shown at its spooky best. The picture is glossy and doesn't belie the film's budget. Torch lights in the dark, face paints, scary voices, and all of the rest, are done with a decided finesse. The background score is pretty decent as well.

Even the actors shed their mediocre performances and come into their own as the film progresses. Sudhir Reddy goes from besotted to terrified quite well, and Yuva Chandra looks comfortable on screen. Pavani Reddy looks like she's having fun with her make-up, and is quite earnest, if rather unconvincing. Gazal Somaiah makes for decent eye candy and little else.

None of this, however, takes away from the fact that The End does not even attempt at novelty, contenting itself with a competent portrayal of a tale told hundreds of times. Your PC movie collection could be more useful if you're looking for a good scare. The only thing The End makes you afraid of, is that the actual end is mostly nowhere in sight.
Share. Save. Connect.
Tweet
THE END SNAPSHOT 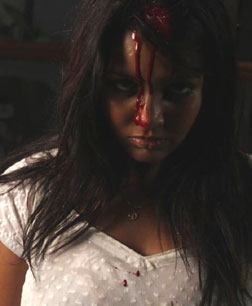 ADVERTISEMENT
This page was tagged for
The End telugu movie
The End reviews
release date
Sudhir Reddy, Yuva Chandra
theatres list
Follow @fullhyderabad
Follow fullhyd.com on
About Hyderabad
The Hyderabad Community
Improve fullhyd.com
More
Our Other Local Guides
Our other sites
© Copyright 1999-2009 LRR Technologies (Hyderabad), Pvt Ltd. All rights reserved. fullhyd, fullhyderabad, Welcome To The Neighbourhood are trademarks of LRR Technologies (Hyderabad) Pvt Ltd. The textual, graphic, audio and audiovisual material in this site is protected by copyright law. You may not copy, distribute, or use this material except as necessary for your personal, non-commercial use. Any trademarks are the properties of their respective owners. More on Hyderabad, India. Jobs in Hyderabad.