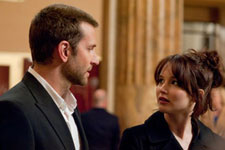 Nupur Barua / fullhyd.com
EDITOR RATING
7.0
Performances
Script
Music/Soundtrack
Visuals
8.0
7.0
6.0
7.0
Suggestions
Can watch again
Yes
Good for kids
No
Good for dates
Yes
Wait to rent it
No
David O. Russell is not your average rom-com director. He is the guy who likes to give us movies that have a heart (remember I Heart Huckabees) and soul (The Fighter), and he definitely likes his intellectual comedy (Three Kings). So when he was offered a chance to adapt a movie on Matthew Quick's book, titled Silver Linings Playbook, he looked for a connection (his son has bipolar and obsessive-compulsive disorders), enhanced the comedy, and turned the storyline around to make it a classic Hollywood film that talks about love, life, relationships, happiness, anger, delusions, and the eternal silver lining that is inevitable if only people would look for it.

Pat Jr. (Bradley Cooper) is brought home from the Baltimore mental health facility after 8 months. He was sent there after he brutally assaulted the man he found in the shower with his wife Nikki. The one thing he learned at the hospital is to be positive, and thus he comes out with every intention of being the mentally and physically fit person that he is certain his wife wants him to be.

Nikki, however, has put a restraining order against him. Pat Jr. now lives with his parents - the always-worried Dolores (Jackie Weaver) and the cranky football-crazy Pat Sr. (Robert De Niro). Pat Jr.'s old friend Ronnie (John Oritz) and his wife Veronica (Julia Stiles) invite him over for dinner one night, and that is where he meets the recently widowed Tiffany (Jennifer Lawrence), Veronica's sister.

Tiffany seems as messed in the head as Pat Jr., but despite his initial reluctance, he finds himself spending more and more time with her. She offers to assist him in contacting his estranged wife (an illegal act), and he in return has to dance with her at an upcoming event. Pat Jr. feels manipulated by his father and Tiffany in every moment, is impatient with his psychiatrist Cliff Patel (Anupam Kher), and even loses his temper a few times, but he soon finds that he is becoming a better, "solid" person.

The movie borrows the characters from Quick's novel, but then it goes into another realm of "living the American dream". The plot points are dramatic, and almost surreal, making the climax predictable, but it works. Although Russell has avoided the usual cheesiness associated with romantic comedies, the movie does tackle the tale of two improbable people being attracted to one another.

He never explains, however, why exactly Tiffany would want to hook up with the mentally disturbed Pat Jr. There is a transition lapse from angst to attraction, and somehow the romance then gets lost, but it is the end (which may be a little anti-climactic) that makes the two hours worth watching.

The end is almost a Bollywood movie, but dealt with in style. There are no high notes, or earth-shattering revelations. The script is a realistic masala entertainer, if that is even possible.

Bradley Cooper is a marvel to watch - you hate him when he is throwing things around the room, and immediately fall in love with him when Tiffany meets him. He is restrained, yet immediately identifiable. And no, he never distracts you with his drop-dead good looks. He is just an ordinary American fellow who wants to move on in life.

The star of the movie is Jennifer Lawrence. She abuses, goes Gothic and behaves rather strangely most of the time, but she delivers. She is the one who slept around, and now she is in love, and you cannot be judgemental with her. She begs you to empathise with her, and you will. It is an unusual pairing - Cooper and she have at least a 15-year age difference - but very convincing. Watch out for the sequence where they dance badly and they know it.

Robert De Niro is the epitome of a man who is getting on in his life, and has his share of tension and irritation. Jackie Weaver, who once played a monster mother (Animal Kingdom), is the perfect sweet and distraught matron.

Anupam Kher shows signs of his Lamhe days with the little bit of comedy that he brings, but essentially, he also works as the serious counsellor. Chris Tucker could have been given more screen time - he is delightful in any role.

The production design is reminiscent of any Pennsylvanian small town. The atmosphere is so perfect that you almost do not notice it. Cinematography is flawless - no gimmicks and no shocks. The costume design is apt, nothing fancy.

All in all, Silver Linings Playbook is a slice-of-life film, with a bit of dramatic liberty taken with things that may seem improbable. It is a must-watch, if for nothing else, then for the optimism that it portrays despite the dark clouds. And for Robert De Niro and Jennifer Lawrence.
Share. Save. Connect.
Tweet
SILVER LININGS PLAYBOOK SNAPSHOT 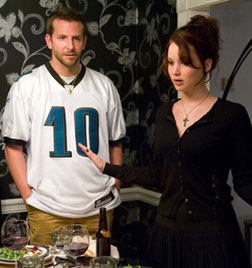 ADVERTISEMENT
This page was tagged for
Silver Linings Playbook english movie
Silver Linings Playbook reviews
release date
Bradley Cooper, Jennifer Lawrence
theatres list
Follow @fullhyderabad
Follow fullhyd.com on
About Hyderabad
The Hyderabad Community
Improve fullhyd.com
More
Our Other Local Guides
Our other sites
© Copyright 1999-2009 LRR Technologies (Hyderabad), Pvt Ltd. All rights reserved. fullhyd, fullhyderabad, Welcome To The Neighbourhood are trademarks of LRR Technologies (Hyderabad) Pvt Ltd. The textual, graphic, audio and audiovisual material in this site is protected by copyright law. You may not copy, distribute, or use this material except as necessary for your personal, non-commercial use. Any trademarks are the properties of their respective owners. More on Hyderabad, India. Jobs in Hyderabad.