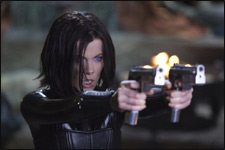 Nupur Barua / fullhyd.com
EDITOR RATING
4.0
Performances
Script
Music/Soundtrack
Visuals
5.0
4.0
5.0
6.0
Suggestions
Can watch again
No
Good for kids
No
Good for dates
No
Wait for OTT
No
For those who came in late, the Underworld series is all about the eternal enmity between the non-human species of Vampires and Lycans, the latter being an evolved race of werewolves. So far, we learned all about the centuries of bloodshed, and the absolute necessity for the 2 groups never to reconcile.

At the heart of the narrative is Selene (Kate Beckinsale), who was once the pride and joy of the Vampire army, till she fell in love with a hybrid (part vampire part Lycan), and began to question the ethics of her tribe.

Underworld: Awakening begins with a new development in the world that Selene and Michael inhabit. Thus far, the inferior human species has remained unaware of the existence of the other species. Now that covens and nests have been unearthed, paranoia strikes, and annihilation of non-humans becomes military priority.

Selene and Michael try to leave the area by boat, but both are captured and frozen in a lab, for research. When Selene awakens, she manages to flee from her prison, only to find that it is now 12 years later. Lycans are almost extinct, there is a weapon that she has, and her enemies want it for their evil purpose.

This installment of the Underworld franchise has the flimsiest plot, the least talented actors (except, of course, for Stephen Rea), and the most unsatisfactory climax. In fact, this has to be the first movie of the series that leaves loyalists not clamouring for more. The premise is so incredulous (and not in a good way), that you will stop trying to comprehend the sequence of events that leads Selene to the end of the movie.

To make up for the lack of a credible story, the makers decided to intersperse every second conversation with visuals of ripped heads, severed body parts and plenty of blood. The gore in the movie is not only irrelevant, but also added for shock value, or so it seems.

The icing on the cake is the presence of constantly flickering lights. The lab has them, the parking lots have them, the corridors have them - the civilised world does not seem to believe in proper lighting. What the audience is left with is a semi-hypnotised sense of being after sitting through all those lights.

Kate Beckinsale goes through all the motions of being Selene with the ease of a professional. She has done this to perfection before, but this time, she seems complacent, and bored. To give her credit, she has maintained her figure, and looks no different than the Selene who first made an appearance almost a decade ago (in the first movie of the series).

The very talented Stephen Rea plays a villain of sorts in the movie. He does look confused at times, as if he wonders why he signed the film. There is no sign of effort from any other member of the cast.

The music is more like stock music, and production value is inconsequential (there's nothing in the film except walls and piers). The fight sequences are not engrossing enough, and the spurting blood and flying intestines are distracting.

In short, the entire movie is a disappointment. If, however, you insist on watching Underworld: Awakening, avoid the 3D version, and maybe your headache will not be as bad.

On a more positive note, there is always the hope that the next movie will manage to regain the lost glory of the series.
Share. Save. Connect.
Tweet
UNDERWORLD 4: AWAKENING (3D) SNAPSHOT

ADVERTISEMENT
This page was tagged for
Underworld 4: Awakening (3D) english movie
Underworld 4: Awakening (3D) reviews
release date
Kate Beckinsale, Sandrine Holt
theatres list
Follow @fullhyderabad
Follow fullhyd.com on
About Hyderabad
The Hyderabad Community
Improve fullhyd.com
More
Our Other Local Guides
Our other sites
© Copyright 1999-2009 LRR Technologies (Hyderabad), Pvt Ltd. All rights reserved. fullhyd, fullhyderabad, Welcome To The Neighbourhood are trademarks of LRR Technologies (Hyderabad) Pvt Ltd. The textual, graphic, audio and audiovisual material in this site is protected by copyright law. You may not copy, distribute, or use this material except as necessary for your personal, non-commercial use. Any trademarks are the properties of their respective owners. More on Hyderabad, India. Jobs in Hyderabad.