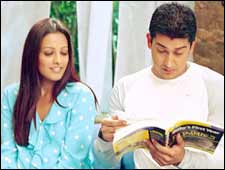 Priyanka Pulla / fullhyd.com
EDITOR RATING
5.0
Performances
Script
Music/Soundtrack
Visuals
NA
NA
NA
NA
Suggestions
Can watch again
NA
Good for kids
NA
Good for dates
NA
Wait to rent it
NA
Sitting through Koi Aap Sa feels like witnessing the fumblings of a writer as he meanders around in search of a story idea, chances upon one, and then crystallises it. Unfortunately, though, the audiences usually are not interested in the creative ruminations of a writer. What they want is a densely-packed, hard-baked story, with all the homework done behind the curtains.

Which is why Koi Aap Sa gets a little unengaging sometimes. Way too much time is spent setting the stage for the movie. The real story hangs like an appendage - a little rattlesnake's tail, small and inconsequential-looking, and trying very hard to make itself heard.

That apart, Koi Aap Sa has much to be congratulated for. The story is the same-old most of the way, and star power is conspicuously missing, but it manages to pull all these un-cooperative elements together into a coherent, often touching story. This one is about Rohan (Aftab Shivdasani) and his friend Simran (Natassha), best buddies at college, with a rather androgynous relationship. There are the usual, cliched, tipping-point-of-love suggestions sprinkled generously all over this part of the movie. Or is it your imagination? You just KNOW from hereon in the movie that they are both going to end up lovers.

Well, Priti (Dipannita Sharma) boogies her way into Rohan's life in the steamily choreographed dance number 'Koi Aap Sa', in which she pole dances and rides the bronco in skimpy clothes. Rohan, who is watching her get wet and change into tinier clothes, falls in love with her straightaway without much more fussing.

Simran helps him in his quest to land Priti while she herself is happily engaged to Vicky (Himanshu Mallik). The two parallel love stories carry on smoothly, except for minor speed-bumps that remain because the respective lovers of Rohan and Simran get irritated with their (Rohan & Simran) extra strong buddyhood.

Then one fine day, while Vicky is away in the States, Simran is raped by his close friend Ranjeet. The movie essentially begins here. Ranjeet dies in an accident in the car-chase by Rohan, immediately after the rape. And Simran and Rohan are left witness-less and helpless in the whole event.

This logically easily remediable problem becomes a hot holy mess because of a series of perfectly synchronised misunderstandings that perpetuate like a Domino effect. Simran decided to wait till Vicky is back in India to tell him about the rape. She gets pregnant and faints while driving a car to receive him at the airport. She has an accident and is rushed to hospital, and while the doctor is delivering the news of her pregnancy to Rohan, assuming he is the child's father, Vicky walks in.

Etc etc etc. Vicky assumes that Simran has been having a relationship with Rohan and disowns her. What follows is Kya-Kehna-style social ostracisation, and lots of jeering and booing behind the backs of both Rohan and Simran, since everybody conveniently assumes that he made her pregnant and that they are pushing the blame on the dead Ranjeet.

Rohan then commits the movie-defining act of bravery, and defiantly tells everyone that what they want to believe is true. And that he is the father of Simran's child and they will get married. The movie REALLY begins here. Not kidding, there is a supposed beginning, an essential beginning and a real beginning to this movie. The third is the biggest and the most important.

From here on Rohan is an absolute treat to watch. He suddenly shifts gears to become the sensitive male, a guy with a protective and understanding attitude towards his friend. He cries easy tears and looks good when he does it. He plays a future father to the child, and a loving, attentive husband. Aftab's acting is so marvellous, you wonder why he is not seen in more mainstream movies, why he isn't superstar power himself.

Natassha doesn't have too much scope, but she is not bad either. The rape victim depiction is hackneyed, and you just want to squeeze one's eyes shut and cut out the tiresome portrayal of the whimpering woman playing out the stereotype. Once this part is over, though, the movie carries on believably. Vicky and Priti of course return to reclaim Simran and Rohan respectively, and both of them choose each other over the friends who ditched them in need. The story ends. Happily.

All in all, the movie does have its merits, but clichéd, poor scripting and confused screenplay win the battle in the end. It's a pity seeing good actors sunk in the quagmire of the above elements, but you can't miss them shining through either.

We won't recommend this movie very zealously, but we won't beat it down either. But it is probably not the best watch in town unless you are a big fan of Shivdasani.
Share. Save. Connect.
Tweet
KOI AAP SA SNAPSHOT

ADVERTISEMENT
This page was tagged for
Koi Aap Sa
hindimovishkoiapsa
Koi Aap Sa hindi movie
Koi Aap Sa reviews
release date
Follow @fullhyderabad
Follow fullhyd.com on
About Hyderabad
The Hyderabad Community
Improve fullhyd.com
More
Our Other Local Guides
Our other sites
© Copyright 1999-2009 LRR Technologies (Hyderabad), Pvt Ltd. All rights reserved. fullhyd, fullhyderabad, Welcome To The Neighbourhood are trademarks of LRR Technologies (Hyderabad) Pvt Ltd. The textual, graphic, audio and audiovisual material in this site is protected by copyright law. You may not copy, distribute, or use this material except as necessary for your personal, non-commercial use. Any trademarks are the properties of their respective owners. More on Hyderabad, India. Jobs in Hyderabad.