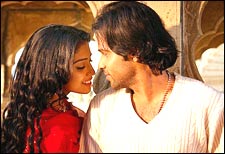 Devyani Srivastava / fullhyd.com
EDITOR RATING
5.0
Performances
Script
Music/Soundtrack
Visuals
NA
NA
NA
NA
Suggestions
Can watch again
NA
Good for kids
NA
Good for dates
NA
Wait to rent it
NA
Awarapan is a venture that is caught between two worlds. On the one hand, with its focus on organized crime and religion, and its portrayal of the universal, epic battle between the incorruptible and the corrupt, it is very, well, vanilla fare. But it also rises a notch above that rank; it is still somewhat unusual, and somewhat risky, for a run-of-the-mill, Bollywood action-packed thriller to dwell on the idea of atheism, piety and God.

The film itself, entangled as it is in this nexus of themes, creates a world where its characters are also caught in a web of dilemmas. At the center of the story stands atheist Shivam (Hashmi), the devoted right-hand man of Hongkong based hotelier and don Bharat Malik (Rana). As the film commences, we learn that Malik is deeply disturbed, obsessed with his secret mistress, a young Pakistani prostitute called Reema.

Prior to departing for London on business, Malik takes Shivam into confidence; he suspects that Reema is being unfaithful to him. Shivam is instructed to shadow Reema, which he does. When Shivam discovers that Malik's worst fears about Reema are true, he promptly calls Malik, who cold-bloodedly and without hesitation responds, "Kill her."

Without further ado, Shivam trains his gun on Reema and her boyfriend, Bilal, ready to do his master's bidding. Then, he falters. He is unable to pump any bullets into either of them. Why? Because Reema (Sharma), in the face of his weapon, screams not for mercy but freedom, her independence (symbolised in the film by a recurrent motif, pigeons) which had been brutally snatched when she been forced into the flesh trade.

Shivam is haunted by demons from his past; he recalls that his now dead lover, Aliyah Hamid (Shriya Saran), had always told him that to set an imprisoned being free is the path to light.

Despite himself, Shivam finds himself a changed man. Not only does he decide that he will not kill Aliyah and Bilal, he also swears he will unite them and set them free against all odds, even at the cost of his own life. And owing to his change in heart of his, all hell breaks loose in Hongkong.

Despite the hiccups in the story-line - clichés and forgettable music by Pritam - Awarapan is intense, and that is because Suri never relaxes his grip, constantly focusing on the story that he is telling. The camerawork is sharp, the editing crisp - the film is just over two hours long.

However, Awarapan is also riddled with problems. The tussle between crime and religion is overt, perhaps even too dumbed-down, stripped to the bare essentials. Barring Shivam, who we see in turmoil, all the characters are uni-dimensional, either sanctimonious (hence heroes) or criminals (hence villains).

But Reema's character, interestingly enough, serves as a mirror to Shivam's - both these characters are dark (one a gangster, the other a prostitute), both are pawns controlled by forces darker and more powerful than themselves. Nowhere is the parallel drawn more clearly than when both Shivam and Reema are referred to as Malik's "dog" and "bitch", respectively, though in different scenes.

Awarapan has an ensemble of villains, all of whom do play their parts well, however long or short. Rana is especially convincingly menacing, though Purab Kohli, who plays Malik's deranged nephew, Munna, is the real show-stealer. Munna, sunk as he is into the senile depths induced by alcohol and coke snorts, gives the viewer goose-bumps.

Of the main cast, Sharma comes across as rather wooden, especially during the song-and-dance sequences. Saran is clearly the better performer of the two. The film, of course, belongs to Hashmi - he shoulders the burden of Shivam well.

As for the film's biggest problem, Awarapan may have a lot going for it, but it lacks sheer star muscle. Hashmi may not be able to compete with the mass appeal of Himesh Reshammiya, or the might of the Deol clan at the box-office. And that may eventually make the film, like its hero, a bit of a lost cause.
Share. Save. Connect.
Tweet
AWARAPAN SNAPSHOT

ADVERTISEMENT
This page was tagged for
Khairatabad Awarapan
Awarapan hindi movie
Awarapan reviews
release date
Emran Hashmi, Shriya Saran
Follow @fullhyderabad
Follow fullhyd.com on
About Hyderabad
The Hyderabad Community
Improve fullhyd.com
More
Our Other Local Guides
Our other sites
© Copyright 1999-2009 LRR Technologies (Hyderabad), Pvt Ltd. All rights reserved. fullhyd, fullhyderabad, Welcome To The Neighbourhood are trademarks of LRR Technologies (Hyderabad) Pvt Ltd. The textual, graphic, audio and audiovisual material in this site is protected by copyright law. You may not copy, distribute, or use this material except as necessary for your personal, non-commercial use. Any trademarks are the properties of their respective owners. More on Hyderabad, India. Jobs in Hyderabad.