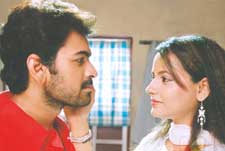 Siva starts with its protagonist, Siva (Pradeep), deciding to commit suicide. It's never a good idea if a film starts with its hero attempting suicide, since you know he's seen the film already. What makes things worse is that he's says repeatedly in his suicide note that each person is responsible for his own actions, making you think that perhaps he's trying to tell you something. One of the truths you realize too late in life is that it's important to pay attention to the detail in suicide notes. People don't write suicide notes everyday - they do it only occasionally, when they have something really important to tell you.

Anyway, since a movie would be inadequate with just a scene of its hero committing suicide, this one goes on to tell you exactly why Siva is contemplating suicide. Siva is a bright young MBA who is unable to get a job since, well, this film's script must've been written in 1969. It is a surprise he wasn't wearing checked bell-bottoms and orange sunglasses. His dad (Chandramohan) takes voluntary retirement and pays Rs. 3 lacs to a tout in Hyderabad who offers to get Siva a job there, but the tout dies of a massive heart-attack, making you think it really must be tough to get Siva a job.

Well, Siva cannot tell his dad this since his dad has pinned all his hopes on this job, and he cannot tell anyone else in Hyderabad since, well, you don't randomly go and tell random people that somebody died searching a job for you. So he starts borrowing money and sending it home, telling his dad that he's gotten the job. In the meantime, he falls in love with Mahi (Saina), the daughter of a rich dad (Chalapathy Rao), who abhors him and suggests to him that if a loser like him died, it would be a small but meaningful step towards global peace.

Stung by this and by all his debtors, Siva decides to kill himself upto 7 times faster than his nearest competitor, when an escaped Pakistani terrorist, Riaz Khan, lands up at his door and takes him hostage. The rest of the film is all about how they fall in love and live happily ever after. At least it should have been, to make it more interesting.

Everything is wrong with Siva - the plot that suffers on both the au courant front and the logic front, the screenplay, the comedy, the visuals, the ads, everything. The first half tries to show Siva as a lively youngster who slowly gets trapped in the morass of debt, but is a soulless sequence of disparate and often meaningless anecdotes with enervated attempts at humor. It could have had a blood-gushing vindication in the second half if Siva rose from the ashes a la Challenge or Arunachalam, but he projects a loser who needs constant endorsement.

Then, the tale itself - these are not the days of Akali Rajyam, and bright MBAs get to choose from a million jobs. The way Mahi is shown falling in love with Siva is a triumph of indolence and compromise in script-writing over creative challenge. And explaining what she sees in him requires a thesis in the dynamics of love.

Pradeep can sneak past most critics, and does fairly okay towards the end, though he's got leagues to progress before calling himself an actor. Saina is good, and has the demeanor of one who is detached about it. The comedy tracks are clichéd from the word go - especially the ones involving Venu Madhav and Rajiv Kanakala. There are thankfully no songs.

The movie is a scripting disaster - don't go anywhere near it.
Share. Save. Connect.
Tweet
SIVA SNAPSHOT

ADVERTISEMENT
This page was tagged for
Siva telugu movie
Siva reviews
release date
Pradeep, Saina
theatres list
Follow @fullhyderabad
Follow fullhyd.com on
About Hyderabad
The Hyderabad Community
Improve fullhyd.com
More
Our Other Local Guides
Our other sites
© Copyright 1999-2009 LRR Technologies (Hyderabad), Pvt Ltd. All rights reserved. fullhyd, fullhyderabad, Welcome To The Neighbourhood are trademarks of LRR Technologies (Hyderabad) Pvt Ltd. The textual, graphic, audio and audiovisual material in this site is protected by copyright law. You may not copy, distribute, or use this material except as necessary for your personal, non-commercial use. Any trademarks are the properties of their respective owners. More on Hyderabad, India. Jobs in Hyderabad.