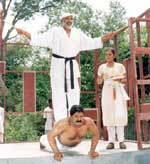 Mithun Verma / fullhyd.com
EDITOR RATING
5.0
Performances
Script
Music/Soundtrack
Visuals
NA
NA
NA
NA
Suggestions
Can watch again
NA
Good for kids
NA
Good for dates
NA
Wait for OTT
NA
You spent 30 minutes looking at the orange juice because it said concentrate. You know that Benjamin Franklin produced electricity by rubbing cats backwards. You got locked up in a bathroom and peed in your pants. Your biological awareness is limited to the three kinds of blood vessels: arteries, vanes and caterpillars. You died before the police arrived because you didn't find the '100' button on the dial pad. And I saw Bhadrachalam.

Mana sontha Rocky, played by the paralytic appeal of Stallone blended discerningly into an unpretentious Mortal Combat (without the lousy soundtrack but with Kumar Sanu's harmonious cleaning of his nasal openings in Telugu), and two ladies that cannot keep anything in their heads except cold, is what you find in this treasure hunt.

Mahalaxmi (Roopa) is the daughter of a very sick Parashuram (Vijaychander) who needs a bypass surgery because the bad guy put a boot into the old man. In order to raise funds for this calamity, she returns back to the village where she stumbles upon Bhadrachalam (Srihari), the Hanuman. And remembers that her dad was looking for an already Taekwondo champion to coach him some more.

Bhadrachalam's loyal Ram and Lakshman, his pet cows, then chase him out of the village because he does nothing but hog like a bull. The producer is surely geared up for Shiv Sena and Menaka Gandhi. Once in the city, he is conned into being a don, and stabbed for rowdy sheeting.

The interval really interferes with your training to become a household pest. Apart from a pelvic thrusting, bedridden, potbellied Taekwondo coach, this half gives you enough laughs to last for a zillion Sienfields.

Recovered from his 174,854,849,567 stabs, the determined hero goes through, in the second half, a hard-earned fitness routine that should make the producers of Erotica greedy for a 'he copied without a copyright' lawsuit. Somewhere along comes Ruchi (Sindhu), who plays the 'I'm an avid follower of V.I.P.' role. And in the final showdown, Bhadrachalam represents India in an international Taekwondo competition, where he beats the finalist with a cast on his hand while the coach cheers on from his hospital bed. This is the only place where you can connect to the movie. Your whole, unworthy life flashes before your eyes, just like that of the hero's.

Srihari really worked hard for this one. He really did, but it's just not digestible to witness Hanuman without the tail. Roopa looks like the shaven off eyebrows of Whoopi Goldberg, and Sindhu the hair dye of Kim Basinger in LA Confidential. Vijay, the fight master, does a decent job, though.

In sum, here's a movie that definitely doesn't have any direction. It's clearly for the cerebral assimilation of those classy ones who believe an antibody to be their uncle's fat wife. Watch it for the spoof of a lifetime.
Share. Save. Connect.
Tweet
BHADRACHALAM SNAPSHOT

ADVERTISEMENT
This page was tagged for
Badrachalam movie Telugu review
bhadrachalam movie review
badrachalam movie review
bhadrachalam movie
bhadrachalam movie rating
Follow @fullhyderabad
Follow fullhyd.com on
About Hyderabad
The Hyderabad Community
Improve fullhyd.com
More
Our Other Local Guides
Our other sites
© Copyright 1999-2009 LRR Technologies (Hyderabad), Pvt Ltd. All rights reserved. fullhyd, fullhyderabad, Welcome To The Neighbourhood are trademarks of LRR Technologies (Hyderabad) Pvt Ltd. The textual, graphic, audio and audiovisual material in this site is protected by copyright law. You may not copy, distribute, or use this material except as necessary for your personal, non-commercial use. Any trademarks are the properties of their respective owners. More on Hyderabad, India. Jobs in Hyderabad.