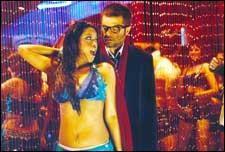 Ghazala Rizvi / fullhyd.com
EDITOR RATING
6.0
Performances
Script
Music/Soundtrack
Visuals
NA
NA
NA
NA
Suggestions
Can watch again
NA
Good for kids
NA
Good for dates
NA
Wait for OTT
NA
Like the taste of real chocolate which mellows lusciously inside your mouth, the movie Chocolate too leaves a lingering, greedy-for-more-taste in your gut. And like the peculiar Belgium variety, which is at once sweet and dark, mushy and nutty, Chocolate places diverse personalities together, blending a distinct classy flavor of its own. Whatever worms it might have, thankfully cannot be detected - at least until you've tasted the entire film.

Set in London, Chocolate has Pipi (Irfan Khan), an artist with a sharp eye for detail but quite blind without his spectacles; Rocker (Suniel Shetty), a mysterious tough guy, also blind with all those designer tresses clouding his eyes; Tubby (Arshad Warsi), a computer whiz, who, defying all norms of nerdiness, is also suave and witty; Devaa (Emraan Hashmi) who ...well, hangs around with unused condoms; and Sim (Tanushree Dutta), who, thankfully for this horde of men, is an accomplished bar-dancer, with a penchant for mouthing raunchy numbers, and a wardrobe leaving out very less for your imagination.

The five-some are all Indian repatriates in London, and while going about their respective jobs during the day-time, team up to create music in the night. Their musical sessions become a bit too loud for the neighborhood, as the London police one morning discover that they were using more than drums to blast off. A burning ship with several charred bodily remains is discovered, and the trail leads to Pipi's and Sim's arrest.

Krish (Anil Kapoor) is a lawyer who dresses like Sherlock Holmes, glints like Perry Mason, and chews on his cigar like Poirot. He also manages to appear too human for a lawyer. As lawyers including the females of the species are high on testosterone, Krish's media suaveness and self-acclaimed success on the prestigious GQ magazine, is almost hormonally driven.

His lust for success makes him vow to get Pipi and Sim free. Only, his clients are playing games with him - Pipi and Sim un-yarn unbelievable stories, often engendering peals of eccentric laughter from Krish, but mostly bouts of frustration and anger. From the esoteric Afghani bandits to London's underworld, and from the cloaked Arabs to the elite British police, everyone is involved in the ultimate showdown at the burning boat, and also in the bank robbery preceding it.

The teasing game becomes interesting with Monsoon (Sushma Reddy), who is a journo attached with Krish, egging him on to seek the truth. Sim, on the other hand, goads him to look elsewhere with her crossing-uncrossing-the-legs acts.

One story peels out of another, and it comes out that Rocker loved Sim. His plans to marry Sim clashed with her plans to wed a millionaire. So Rocker gets into selling drugs for an unidentified mystery man, Arzai. Graduating quickly, he takes on bigger assignments involving murder, and ultimately, operation Chocolate. His friends support him till the end - that is, until all but the arrested duo end up dead.

Sometimes Chocolate meanders into the realm of Dus, "Who is the unseen Arzai?" ruminations. But depend upon director Vivek Agnihotri to manouver his tale with amazing dexterity. Even though there are several loose ends, Chocolate ends with absolutely a bang, with the innermost layer of intrigue and passion stunning you, when finally uncovered just befor the end.

The anti-heroes of Chocolate are sketchy in characterization, and while keeping you edgy, the flick will never make you feel close to either of its characters. Made by an ad-man himself, the movie depends heavily on being able to bombard your senses with enough audio-visual masala, like the clever bank robbery and Tanushree's intermittent gyrations, to slow down your logical reasoning.

Nevertheless, the sprinkles of humor by Arshad Warsi are enjoyable, even though Emraan Hashmi, looks a little regretful as he doesn't get anywhere as near to Tanushree as in Aashiq Banaya Aapne. Chocolate however has Irfan Khan written all over it, punctuated by sparks of brilliance from Anil Kapoor.

What a dump movie. Bollywood cannot a good job even with a "lifted" script, and they made lot of mistakes too.

RATING
2
Rahul R on 20th Sep 2005, 10:23am | Permalink
A frame by frame lift from the brilliant 'Usual Suspects'...watch that...coz I am surprised that nobody noticed that the denouement in Chocolate crumbles teh whole story..c'mon if teh boat story was also a figment of Irfan's imagination..what were teh police doing not verifying his story. So If you have to copy another movie..dont tinker with teh storyline..else you will end up..bamboozeld..
RATING
6
Kaiser Soze on 17th Sep 2005, 8:55am | Permalink
the story seems familiar...

Maybe you should try to stop using spoilers in ur reviews."One story peels out of another, and it comes out that Rocker loved Sim. His plans to marry Sim clashed with her plans to wed a millionaire." Not necessarily spoilers but try not to reveal the plot itself as it spoils the fun for some of us.

ADVERTISEMENT
This page was tagged for
chocolate bollywood full movie download
download chocolate deep dark chocolate bollywood full movie
Chocolate hindi movie downloed 720p
chocolate movie hindi download
chocolate movie dwonlord full hd in hindi
Follow @fullhyderabad
Follow fullhyd.com on
About Hyderabad
The Hyderabad Community
Improve fullhyd.com
More
Our Other Local Guides
Our other sites
© Copyright 1999-2009 LRR Technologies (Hyderabad), Pvt Ltd. All rights reserved. fullhyd, fullhyderabad, Welcome To The Neighbourhood are trademarks of LRR Technologies (Hyderabad) Pvt Ltd. The textual, graphic, audio and audiovisual material in this site is protected by copyright law. You may not copy, distribute, or use this material except as necessary for your personal, non-commercial use. Any trademarks are the properties of their respective owners. More on Hyderabad, India. Jobs in Hyderabad.