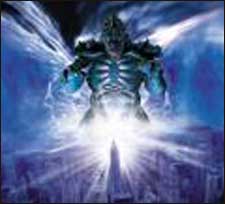 Priyanka Pulla / fullhyd.com
EDITOR RATING
1.0
Performances
Script
Music/Soundtrack
Visuals
NA
NA
NA
NA
Suggestions
Can watch again
NA
Good for kids
NA
Good for dates
NA
Wait for OTT
NA
My memories of Yonggary are hazy. Like of a movie forcibly running in the background while you are catching some shuteye on an international flight, I remember vague disconnected images. Except my sleep was not induced by jetlag.

Yonggary is the nightmare you have when you go to bed after watching Godzilla. In the morning you will remember:

1. Alien (the movie) like creatures talking to each other in English, using voice modulators to sound like Darth Vader. (The insect like aliens, which control Yonggary.)

2. A Conan The Destroyer like resurrected Daggoth who can be killed by pulling off its horn. (Yonggary can be killed when you disable the diamond on his forehead).

3. All the clichés you ever heard in your life: "Okay… so the craft runs on an Energy beam…right doctor? So we can track it using INFRA RED." Or, "So if I have to go tell my bosses we are up against a prehistoric monster that is resurrected by aliens… and that's a big IF…"

Yonggary, which happened because the Koreans went crazy after their success with Godzilla, is ACTUALLY about a giant prehistoric dinosaur. Created by alien beings. Who look like insects. And travel at light speed. And talk in English (using language translators because English is the national language of the universe ).

What Mahabali Shaka is to Phantom comics, Yonggary is to Godzilla. It's got a greedy paleontologist, Campbell, who is out to resurrect Yonggary and destroy the world. And is the first to get destroyed. It's got a senile, dribbling, spluttering old man who is making ominous predictions and trying to warn Campbell's crew, in a blubbering voice, of what they are unleashing. And no one believes him. It's got a female paleontologist, Holly, who wears checkered shirts with rolled up sleeves, is on the good side and mouths dialogues like a six-year-old reading from 'My First English Reader'. And it's got Gladrags India supermodels dressed as the military and flying on jetpacks and sounding , well, like Gladrags India supermodels.

Okay, if I am making this sound like a brilliant movie, I am HOPELESSLY off the mark. It's neither a good movie, nor stupid. It's, ahem, like a vision you have when you are in a coma and are about to die. And will recall only if you come back to life. Like a visitation from hell.

The special effects are… well… like what the Cottingly sisters tried with their fairy and elf fraud that fooled Conan Doyle. Little paper people propped up alongside a Yonggary who got created when Duke Nukem's creator got Alzheimer's and started playing around with his own software. Dunno how the Koreans managed to get hold of it.

On the whole, Yonggary will freak you out. There are so many unexplained mysteries in the movie. Like how they managed to make such a movie in 1999 after practically every breakthrough that had to be made in movie technology was already underway. Or where they got those actors. Or why they are playing it at Sangeet this week. Watch only if you are … ahem… like an investigator or something.

ADVERTISEMENT
This page was tagged for
Yonggary english movie
Yonggary reviews
release date
Richard B Livingston, Harrison Young
theatres list
Follow @fullhyderabad
Follow fullhyd.com on
About Hyderabad
The Hyderabad Community
Improve fullhyd.com
More
Our Other Local Guides
Our other sites
© Copyright 1999-2009 LRR Technologies (Hyderabad), Pvt Ltd. All rights reserved. fullhyd, fullhyderabad, Welcome To The Neighbourhood are trademarks of LRR Technologies (Hyderabad) Pvt Ltd. The textual, graphic, audio and audiovisual material in this site is protected by copyright law. You may not copy, distribute, or use this material except as necessary for your personal, non-commercial use. Any trademarks are the properties of their respective owners. More on Hyderabad, India. Jobs in Hyderabad.