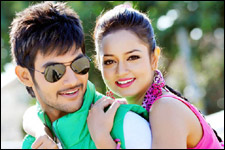 Deepa Garimella / fullhyd.com
EDITOR RATING
5.5
Performances
Script
Music/Soundtrack
Visuals
7.0
4.0
6.5
6.5
Suggestions
Can watch again
No
Good for kids
Yes
Good for dates
Yes
Wait to rent it
Yes
Aside of being saddled with a name like that Lovely is a rather good try at a keep-it-simple kind of film. It has no big names or brands to pull audiences in, but this is also a movie that one would walk into with no expectations. Lovely handles this non-burden pretty well, especially if it is targeting the casual campus crowd.

Lovely is the name of the darling daughter (Shanvi) of Mangalampalli Maharathi (Rajendra Prasad). Lovely and Aakash (Aadi) fall in love in an elaborate sequence involving their respective friends (Chinmayi and Vennela Kishore) faking Facebook profiles.

However, Lovely idolizes her father, who, in turn, has brought her up to be what he believes is "the ideal daughter". Dad isn't too pleased with Lovely's choice of life partner, and wants to check Aakash out in his own way. Aakash is game, and the testing leads to further complications, as you will discover.

The movie's script is nothing to speak of, and in fact, the twists and loops are preposterous. The Aakash-Lovely love track is based on the age-old ridiculous premise of strangers who hide behind their online personas and get someone else to live their love story. After this is set up, the movie proceeds well, until Maharathi starts thinking up a weird ploy to get Aakash off his daughter's life.

That said, director B Jaya (who is also credited with the writing) shows she's more clued into direction - she shows expertise in stringing together her material quite decently. She seems to know how to handle her young actors, and also has a sense of comic timing.

What works for the film are Aadi (more on him later) and the constant flow of comedy. The humour is low-decibel, powered mostly by Vennela Kishore. But the comedy is devoid of adult content, and is at least "on" all the time, ensuring a rather consistently lively mood throughout. The writers try out easy-sounding puns and lines - which aren't brilliant, but almost make it.

Aadi comes across as an earnest newbie who works on his craft. You can tell that he has put in effort to be what he is on camera, and that he doesn't take his job for granted. He acts pretty well for his age, has inherited his father's (Saikumar) voice, is much better at Telugu than some of his counterparts, and, as we have noted in his debut film, is a good dancer.

Shanvi is limited by her role, but perhaps she could have done better with a more experienced director. Vennela Kishore is a hoot despite being stifled in an under-written comedian's role. Chinmayi seems to have been wasted, as are Harshavardhan and Satya. Rajendra Prasad and Ahuti Prasad lend some weight to the movie, thanks to their dignified presences.

Anoop Rubens' music complements the film's youthful tone. The song "Chori Chori" is refreshingly cute. Despite not being a budget-heavy movie, the visuals haven't been compromised on - watch out for the songs shot in foreign locales like Turkey.

Lovely could appeal to the college-going.. err, class-bunking crowd that doesn't mind a time-pass movie if it is playing in a theatre nearby. The rest of us might want to wait for the bigger films that will come by soon.
Share. Save. Connect.
Tweet
LOVELY SNAPSHOT 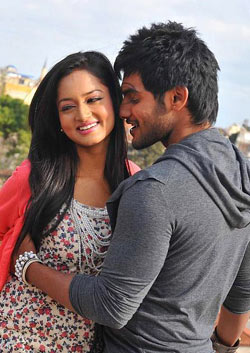 ADVERTISEMENT
This page was tagged for
Lovely telugu movie
Lovely reviews
release date
Aadi, Shanvi
theatres list
Follow @fullhyderabad
Follow fullhyd.com on
About Hyderabad
The Hyderabad Community
Improve fullhyd.com
More
Our Other Local Guides
Our other sites
© Copyright 1999-2009 LRR Technologies (Hyderabad), Pvt Ltd. All rights reserved. fullhyd, fullhyderabad, Welcome To The Neighbourhood are trademarks of LRR Technologies (Hyderabad) Pvt Ltd. The textual, graphic, audio and audiovisual material in this site is protected by copyright law. You may not copy, distribute, or use this material except as necessary for your personal, non-commercial use. Any trademarks are the properties of their respective owners. More on Hyderabad, India. Jobs in Hyderabad.