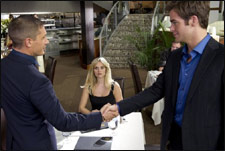 Nupur Barua / fullhyd.com
EDITOR RATING
4.0
Performances
Script
Music/Soundtrack
Visuals
6.0
4.0
5.0
6.0
Suggestions
Can watch again
No
Good for kids
No
Good for dates
Yes
Wait to rent it
No
A woman is always the bane of a man's existence, if history, literature and religion are to be believed. She can turn brother against brother, friend against friend, and even one country against another (look what happened when Helen of Troy eloped with Paris). Therefore, when the teaser trailers of This Means War were released, interested film buffs thought that this recurring theme, coupled with loads of humour (or so it seemed) would be a great watch. These same enthusiasts best avoid disappointment, then, by not watching the movie.

Joseph McGinty Nichol, who goes by the name of McG, and is best known as the director of the Charlie's Angels movies, is comfortable in the action genre, definitely. His experience with the Angels, however, does not make him the best person to direct a movie about a confused girl, wooed by 2 friends and impervious to the resulting chaos around her.

To begin at the beginning, Tuck Henson (Tom Hardy) and Franklin Delano Roosevelt "FDR" Foster (Chris Pine) are the best of buddies, always looking out for each other as they solve crimes and expose the bad guys. They are not always subtle, however, and a messed-up Hong Kong mission results in their boss, Collins (Angela Bassett), grounding them to desk jobs.

The divorced Tuck is desperate to date again, since his ex-wife Katie (Abigail Spencer) does not seem to keen to hang out with him too often. He posts his profile on a dating site, and is asked out by Lauren Scott (Reese Witherspoon), a consumer-product-testing manager. Lauren is trying to get over her ex-boyfriend's present status - engaged to be married.

Lauren and Tuck get along fine, but she meets - immediately after - FDR, whom she is not too impressed with initially. He, however, stalks her, till she agrees to go out with him. Lauren begins to like him, and now she is confused.

In the meantime, Tuck and FDR discover that they are dating the same girl, and while they promise to behave like gentlemen and let her decide whom she wants to choose. Then they promptly use all resources available to them to track and bug each other's movements and progress with the girl.

Within the first 15 minutes, the story becomes predictable. The bromance between the 2 actors is emphasised in so many ways that you immediately know that they are going to break up soon. The reconciliation towards the end of the movie is almost a farce.

And what is Lauren's problem? She has a successful career, so why does she need a man to complete her, or to prove to her ex that she is happy? Her idea of a flawed man - dainty hands, or being British - is ridiculously lame. Whatever happened to beauty (and accents) being skin-deep when it comes to true love?

What the movie lacks is credibility. It makes the CIA look stupid, period. Of course, the humour is dull and tedious, so that adds to the yawns. There is also a villain, who does not do anything villainous right till the end. Collins keeps telling the two agents to follow up on Heinrich (Til Schweiger), but they are too busy outsmarting each other. Collins and her superiors do not seem to notice the lack of commitment. And one is not sure why Heinrich is a villain in the first place, despite his snarls and sulks.

Both Chris Pine and Tom Hardy do what they can with the weak script. One cannot fault their performances, and the chemistry between the 2 will make you believe that they are best friends in real life, too. Hardy, with his British accent, and Pine, with his fathomless blue eyes, are drool-worthy.

Reese Witherspoon, on the other hand, does not exhibit enough spunk to warrant 2 hot guys fighting over her. She seems uninterested in the role, and just plays along, without the fire that we have seen earlier in movies like Walk The Line, or even Legally Blond.

Chelsea Handler is best suited to her job as a talk show host. In this movie, she is irritating. Angela Bassett is wasted, as are Abigail Spencer and Warren Christie.

This Means War is not worth watching. If you are looking for some real Spy Vs Spy action, then watch the original Infernal Affairs series of films, or just pick up a MAD magazine.
Share. Save. Connect.
Tweet
THIS MEANS WAR SNAPSHOT

ADVERTISEMENT
This page was tagged for
This Means War english movie
This Means War reviews
release date
Reese Witherspoon, Chris Pine
theatres list
Follow @fullhyderabad
Follow fullhyd.com on
About Hyderabad
The Hyderabad Community
Improve fullhyd.com
More
Our Other Local Guides
Our other sites
© Copyright 1999-2009 LRR Technologies (Hyderabad), Pvt Ltd. All rights reserved. fullhyd, fullhyderabad, Welcome To The Neighbourhood are trademarks of LRR Technologies (Hyderabad) Pvt Ltd. The textual, graphic, audio and audiovisual material in this site is protected by copyright law. You may not copy, distribute, or use this material except as necessary for your personal, non-commercial use. Any trademarks are the properties of their respective owners. More on Hyderabad, India. Jobs in Hyderabad.