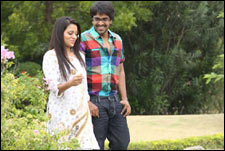 Deepa Garimella / fullhyd.com
EDITOR RATING
4.0
Performances
Script
Music/Soundtrack
Visuals
5.0
3.0
6.5
7.0
Suggestions
Can watch again
No
Good for kids
No
Good for dates
Yes
Wait for OTT
Yes
Eager to connect with the youth, Ee Rojullo takes the path of several enthusiastic low-budget films of recent times - fresh faces, new-age slang, and a generally contemporary setting. Now this is the kind of zealousness that, more often than not, tends to sideline things like craft and finesse. This is what Ee Rojullo is guilty of - while the movie can be appreciated for its novel approach and its focus on its story, it hasn't been put together too well.

The story is pretty simple - boy meets girl, they hate each other at first, but obviously, are on the way to true love. Newcomers Srinivas and Reshma play the lead roles, Sri and Shreya, respectively. Sri was manipulated by his ex-girlfriend for his money, and hence, he doesn't have a good opinion of the fairer sex. Shreya is being stalked by a psychopath, and that makes her averse to "friendship" with men.

Sri pretends to be married so that he can move into his new flat, which, unfortunately, happens to be Shreya's family's. Sri and Shreya don't have pleasant confrontations at first. But soon, they find it hard to live without each other. After a few easy-to-resolve complications, all is well.

The movie speaks from a world in which most youngsters are amoral, use relationships for money, and are generally disrespectful of the feelings of others. It seeks to tell us that even in this bleak, debauched planet, love survives.

Ee Rojullo showcases teenage-ish emotions, and while the content may be right some of the time, the execution is hugely flawed. The overall feel is stagey and contrived, and the writing and screenplay lack a professional touch. The characters seem quite emotionally immature, and the situations they get into are quite absurd.

For example, Shreya getting up close and personal (and even touchy-feely) with Sri, who, she assumes, is married - this is unnatural. Similarly, Sri lying to his landlord about him being a married man; carrying out a drama for the sake of his landlady; and actually declaring to Shreya later on that the lie is "a very small matter", and that he "wasn't cheating" anyone - this is the kind of casual amorality that is disturbing about Ee Rojullo. In addition, there's also quite a bit of innuendo-laden humour. We're not being preachy here; we're just asking writers to think about what they show as "normal" and "mainstream".

The one thing going for this flick is the comedy - led by Srinivas' stammering sidekick (played by a wonderful actor called Sai), and the character of Manemma. While Reshma seems comfortable in her role, Srinivas has some work cut out for him. It is disappointing to see M S Narayana in such a tiny role, though. And the rest of the actors are rather sad.

Pleasantly, the music and the cinematography are quite good. The romantic numbers are a treat to listen to.

Overall, this is an attempt that could have been much better.
Share. Save. Connect.
Tweet
EE ROJULLO SNAPSHOT 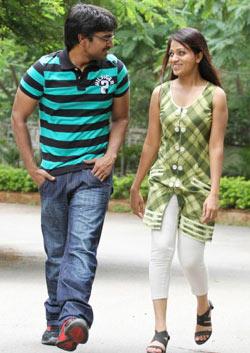 
Pros: dialogues, little bit of comedy
Cons: Heroine
Nik on 25th Mar 2012, 11:52am | Permalink
I was desperate to watch this movie and watched it the next day of it's release..

This movie lacked a strong message.. It's a movie only for people who STILL don't know what's going on in the society in the name of love.

But for those who are already in love or had a breakup.. it's just nothing... Just a time pass flick.

ADVERTISEMENT
This page was tagged for
Ee Rojullo telugu movie
Ee Rojullo reviews
release date
Mangam Srinivas, Reshma
theatres list
Follow @fullhyderabad
Follow fullhyd.com on
About Hyderabad
The Hyderabad Community
Improve fullhyd.com
More
Our Other Local Guides
Our other sites
© Copyright 1999-2009 LRR Technologies (Hyderabad), Pvt Ltd. All rights reserved. fullhyd, fullhyderabad, Welcome To The Neighbourhood are trademarks of LRR Technologies (Hyderabad) Pvt Ltd. The textual, graphic, audio and audiovisual material in this site is protected by copyright law. You may not copy, distribute, or use this material except as necessary for your personal, non-commercial use. Any trademarks are the properties of their respective owners. More on Hyderabad, India. Jobs in Hyderabad.