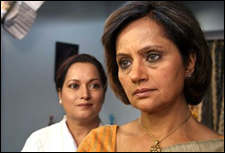 Nupur Barua / fullhyd.com
EDITOR RATING
2.0
Performances
Script
Music/Soundtrack
Visuals
6.0
4.0
5.0
6.0
Suggestions
Can watch again
No
Good for kids
No
Good for dates
Yes
Wait to rent it
No
In the 1980s, there was, in Bollywood, an explosive lead couple which delivered hits that no one forgot. From Suraksha to Wardaat, this dynamic duo was much in demand. And now, after decades, they are back with a movie that deals with love in old age. Enough reason for the older generation to rush to the theatre, yes, but a hit? Definitely not.

Zindagi Tere Naam is based on Nicholas Sparks's novel, The Notebook, but the source of inspiration is not mentioned anywhere in the film. So, then, technically speaking, it is a rip-off. There has been a U Me Aur Hum some years ago, and that was painful enough, despite the money spent. Zindagi Tere Naam was made at a modest budget of Rs. 5 crores, and it shows.

Singh (Mithun Chakraborty), an aam aadmi, reads a story to one of the patients in an old-age home. This patient (Ranjeeta) has Alzheimer's Disease, so she is confused and sulking most of the time. She plays the piano, without remembering that she knows how, and she keeps pestering the patient Singh to tell her more about the characters in the story.

Singh reads out the handwritten story from a notebook that has the words "Notebook" written on it. It is the love story of Siddharth (Aseem Ali Khan) and Anjali (Priyanka Mehta). Siddharth lives in a hill town, and chops wood to make violins. Anjali, who is on vacation, wears the skimpiest clothes in that weather, and avoids Siddharth's desperate attempts to forge a "friendship". He then jumps into a river, and she falls in love.

Despite this auspicious start to their romance, and a few songs, Anjali's rich and snobbish parents (Dalip Tahil and Supriya Karnik) decide to return, with their daughter, to Chandigarh. The vampish mother intercepts Siddharth's letters to Anjali (all 365 of them), and the young girl tears a 1975 calendar off the wall to signify that she is over her first love. Her parents then set her up with a childhood friend, Vishal (Ashish Sharma), and she promptly falls in love with him.

Siddharth's alcoholic father (Sharat Saxena) dies, and the lonely hero makes, with his bare hands (and alone), his dream house. It is now more than 5 years later, and he has still not forgotten Anjali.

As the patient keeps asking Singh, who is also a rather distracted meditation teacher, what does Anjali eventually do? Does she marry the man she has had a long relationship with, or does she go back to her holiday romance? To know, you have to watch the movie, if you dare.

There is nothing wrong with the story. After all, the book was a record-breaking bestseller in the late 1990s, and people still cry when they read it. What is really wrong is this movie. With flimsy, filmy dialogues that belong to the era of Sanjay Kapoor movies, Zindagi Tere Naam has shoddy production design, and appalling costumes, especially for the young couple. In fact, Anjali's clothes are the biggest eye-sore in the entire film.

Ranjeeta was always a one-expression actor, and she still is. At least she is consistent, and age has not taken away her grace and beauty. Despite her monotonous dialogue delivery, she manages to steal the show.

Mithun Chakraborty is a great actor, and sincere to boot. He plays the aged man with finesse, despite the corny dialogues. He is the only reason to watch the movie.

Aseem Ali Khan is average, and Priyanka Mehta is plain irritating. They mess up the mood and tone of the movie completely, and the director should have maybe cast a more competent couple of actors.

Ashish Sharma, on the other hand, who is now the famous Chandragupta Maurya of the small screen, shows promise.

Dalip Tahil's character is a little sketchy, and Supriya Karnik looks stern enough to be the strict mother. Himani Shivpuri, Yatin Karyekar and Amit Mistry have smaller supporting roles, but they are much better actors than the younger lead pair.

Zindagi Tere Naam is strictly for Mithun and Ranjeeta fans, and we hope they are paired together soon for a much better movie. This movie was shot a few years ago, and never saw the light of day till now. Now you know why. Avoid, unless you want to sleep in the air-conditioned theatre.
Share. Save. Connect.
Tweet
ZINDAGI TERE NAAM SNAPSHOT

ADVERTISEMENT
This page was tagged for
Zindagi Tere Naam hindi movie
Zindagi Tere Naam reviews
release date
Mithun Chakraborty, Ranjeeta
theatres list
Follow @fullhyderabad
Follow fullhyd.com on
About Hyderabad
The Hyderabad Community
Improve fullhyd.com
More
Our Other Local Guides
Our other sites
© Copyright 1999-2009 LRR Technologies (Hyderabad), Pvt Ltd. All rights reserved. fullhyd, fullhyderabad, Welcome To The Neighbourhood are trademarks of LRR Technologies (Hyderabad) Pvt Ltd. The textual, graphic, audio and audiovisual material in this site is protected by copyright law. You may not copy, distribute, or use this material except as necessary for your personal, non-commercial use. Any trademarks are the properties of their respective owners. More on Hyderabad, India. Jobs in Hyderabad.