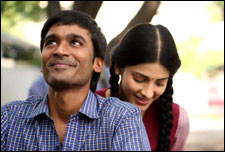 Deepa Garimella / fullhyd.com
EDITOR RATING
2.0
Performances
Script
Music/Soundtrack
Visuals
7.0
3.0
8.0
7.5
Suggestions
Can watch again
No
Good for kids
No
Good for dates
No
Wait for OTT
Yes
Like its best-performing sub-brand, Kolaveri Di, the movie 3 itself is an extremely successful marketing ploy designed to draw eyeballs and attention to a central premise gone horribly wrong. Mr and Mrs. Dhanush are proven wonderful marketers, and maybe even filmmakers, to an extent, but getting 3 generations of people to flock to first-day shows of 3 might be the best they can do for the film, since it's all downhill from here.

The movie opens with a family mourning the death of someone. Cut to the flashback, where Intermediate kids Ram (Dhanush) and Janani (Shruti Hassan) are falling in love with each other, after Ram's relentless pursuing of Janani.

This part of the plot, in fact, lends respect to Aishwarya Dhanush's story-telling capabilities. It has a sunny, cheerful texture, and unwinds slowly and gently, with an eye on life's little nuances. Aishwarya knows how to weave a romance, and also, it's interesting to see how she has made Dhanush and Hassan effortlessly look like Intermediate kids.

After a while, they tell us what is wrong with the picture. A personality disorder is brought in, and that is when you discover that you've been conned by some very glib salesmen who've sold you one of the weirdest stories to hit the screens in some time.

From then on, the plot scrambles for sense, not knowing how exactly to deal with the said disorder, and instead, turning it into a joke. The tension that builds at the beginning of every scene is too much, and the returns you get are meager. The developments are disturbingly violent, but audiences are actually laughing for relief whenever something destructive happens.

First note to the filmmakers: target your audience; in your case, it's rude not to. Wonderful viral strategy and all that, but did you not see disaster looming large when you discovered little kids enamoured by Dhanush's easy rendition of Kolaveri Di? The film is certainly not material meant for kids, even if they've been emotionally scarred enough at home to be numb to the story. Then again, the fact that parents hardly bother to research what they're taking their kids to is probably a telling statement on the state of our society.

Secondly, showing us 2 movies for the price of one doesn't compensate for what it puts you through. The first half of 3 is completely disconnected with the second - both in tone and in content.

Dhanush fits the bill perfectly when portraying the young, clean-shaven Ram, and has even endeared himself enough to the crowds to be able to elicit laughs at the right places. However, he needs to have a lot more meat on him if he must be a leading man.

Hassan is good - she's crying most of the time, and howling away to glory in the end of the flick. It is her dubbing artiste who actually deserves credit for making her look so good.

Rohini hams away when she's emotional, Prabhu is a picture of sanity in this mess, and the person playing Ram's friend Shankar is brilliant.

Aniruddh's compositions are brilliant. Kolaveri Di is hardly as spectacular a song as its success is, with songs like "Kannulada" having a lot of character. The background score is beautiful. Visually, too, this is a well-made film.

In all, 3 is hardly entertaining, nor is it a masterpiece. Watch it if you think you can stomach it.
Share. Save. Connect.
Tweet
3 SNAPSHOT 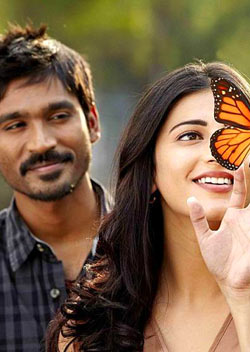 ADVERTISEMENT
This page was tagged for
3 telugu movie
3 reviews
release date
Dhanush, Shruti Haasan
theatres list
Follow @fullhyderabad
Follow fullhyd.com on
About Hyderabad
The Hyderabad Community
Improve fullhyd.com
More
Our Other Local Guides
Our other sites
© Copyright 1999-2009 LRR Technologies (Hyderabad), Pvt Ltd. All rights reserved. fullhyd, fullhyderabad, Welcome To The Neighbourhood are trademarks of LRR Technologies (Hyderabad) Pvt Ltd. The textual, graphic, audio and audiovisual material in this site is protected by copyright law. You may not copy, distribute, or use this material except as necessary for your personal, non-commercial use. Any trademarks are the properties of their respective owners. More on Hyderabad, India. Jobs in Hyderabad.