Wrath Of The Titans (3D) Review

Shruthi / fullhyd.com
EDITOR RATING
5.0
Performances
Script
Music/Soundtrack
Visuals
6.0
5.0
5.0
7.0
Suggestions
Can watch again
No
Good for kids
No
Good for dates
No
Wait for OTT
Yes
What probably works in Wrath Of The Titans' favor is that being a sequel, it is only expected to pick up from where the first left. And thus having approached it with its predecessor in the head, it is quite easy to say it's a slightly better sequel, but with nothing drastically different.

After defeating the Kraken, Perseus (Sam Worthington) manages to live a quiet life as a fisherman, along with his son, Helius. But he's pulled out of his paradise by a war between the gods and the Titans, that threatens to wipe out the world.

Zeus (Liam Neeson), Perseus's father, is captured, and his powers drained off in Tartarus, after his own godly son Ares (Edgar Ramirez) and his brother Hades (Ralph Fiennes) plot against him and strike a deal with Kronos. Kronos, leader of the Titans, also happens to be the defeated father of Zeus, Hades and Poseidon.

As Zeus lies weak in Tartarus, and Kronos is growing in power, it is up to Zeus' favored demi-god son Perseus to save the world from annihilation. To do so, he enlists the help of Queen Andromeda (Rosamund Pike), Poseidon's demi-god son Argenor (Toby Kebbell) and Hephaestus (Bill Nighy). Together, they must travel to the underworld to save Zeus and the world from Kronos.

The film's visual appeal is one of its high points - especially the sights inside of the Tartarus, designed as a torturous labyrinth that is the underworld. And of course, the sequel's share of beasts and creatures, like the Cyclops, look better than the ones we saw in the first movie. Rosamund Pike, taking over from Gemma Arterton as the warrior queen Andromeda and playing Perseus' s love interest, looks dishy. And that's about all the good things one can say about this one.

The script is the biggest disappointment, with lame attempts at humor, and doing nothing positive with the storyline. And lesser said about the characterization, the better. In laying bare the motives of its characters, the film exposes the lack of personality in any of them, an angle that held potential. And so we have crucial characters doing a volte-face, without explanation or logic.

And there's really nothing to blame about the performances, what with no scope and all. To top that up, Sam Worthington manages to glide through the movie with no noticeable change in his expression.

In all, the dialogue's bad, and the script's worse. You can safely give this one a miss, and not worry about missing anything cinematically substantial.
Share. Save. Connect.
Tweet
WRATH OF THE TITANS... SNAPSHOT
WRATH OF THE TITANS (3D) SNAPSHOT 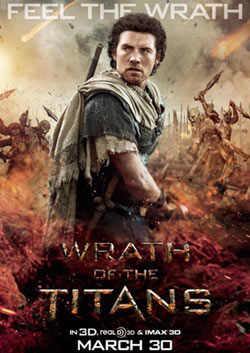 ADVERTISEMENT
This page was tagged for
Wrath Of The Titans (3D) english movie
Wrath Of The Titans (3D) reviews
release date
Sam Worthington, Liam Neeson
theatres list
Follow @fullhyderabad
Follow fullhyd.com on
About Hyderabad
The Hyderabad Community
Improve fullhyd.com
More
Our Other Local Guides
Our other sites
© Copyright 1999-2009 LRR Technologies (Hyderabad), Pvt Ltd. All rights reserved. fullhyd, fullhyderabad, Welcome To The Neighbourhood are trademarks of LRR Technologies (Hyderabad) Pvt Ltd. The textual, graphic, audio and audiovisual material in this site is protected by copyright law. You may not copy, distribute, or use this material except as necessary for your personal, non-commercial use. Any trademarks are the properties of their respective owners. More on Hyderabad, India. Jobs in Hyderabad.