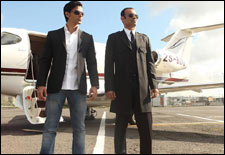 Nupur Barua / fullhyd.com
EDITOR RATING
4.0
Performances
Script
Music/Soundtrack
Visuals
6.0
4.0
5.0
6.0
Suggestions
Can watch again
No
Good for kids
No
Good for dates
Yes
Wait for OTT
No
The phrase "Blood Money" refers, conventionally to the money paid to the kith and kin of a slain person, or to money paid to a killer, or even to money paid for information on a murderer. In the movie, the protagonist is not put in any of the above situations, so the title can be misleading.

In fact, the protagonist is one confused fellow. His name is Kunal (Kunal Kemmu), and his flight into Cape Town is his first air journey. He has just procured his dream job with a leading diamond company, run by Zaveri (Manish Chaudhari) and his brother (Sandiip Sikand). Zaveri is actually Zakaria, a criminal who has convinced the world that he is dead and is now leading life as a respectable businessman.

An excited Kunal and his young wife Arzoo (Amrita Puri) settle in before you can say "carat", and sing a couple of songs along the way. When Kunal sorts out an important deal, the boss takes notice of him, and immediately flies him all over the place in his private jet.

More song and dance sequences follow, and the young boy is exposed to the high life, complete with sex, drugs and rock and roll.

A neglected Arzoo, in the meantime, throws tantrums and nags. Disregarding the advice of a well-meaning friend, she does not look for a job, and sulks around the house. She also tells her husband, in painstaking detail, the fairy tale of Hansel and Gretel, which then serves as some sort of metaphor for the situation the protagonist finds himself in, eventually.

And then Kunal finds out that the company he works for is not so respectable after all.

Despite the simple plot, it is never clear why things turn out the way they do. All major transitions in character happen in the blink of an eye. Kunal goes from loving husband to lecherous man within minutes. Arzoo throws a fit and then becomes dutiful wife. Kunal's colleague Sean praises Zaveri to high heaven, and then he tells Kunal how evil he is. The only consistent character is Zaveri's brother, who is envious of Kunal's meteoric rise to success.

Then there is a terrorist who likes to kill labourers, and a policeman who appears out of nowhere when Kunal gets into a brawl at a bar. Through it all, the whole world seems to be united in some sort of conspiracy against the young Kunal, even before he becomes a hot-shot, and you are never quite sure why.

Kunal Kemmu delivers, to the best of his ability. He makes the young character believable, and seems quite comfortable doing so. There are times when he may look bewildered, but that may have something to do with the script.

Amrita Puri is not too bad, but after her promising debut in Aisha, she seems a little monotonous. There is not much for her to do, though.

Manish Chaudhari, considered one of the best character actors we have today, is wasted. His bizarre habit of saying "Superb" all the time makes him look more ridiculous than intimidating. The fault here may lie with the director, because the actor has delivered some unforgettable performances earlier, both on screen and on stage.

Sandiip Sikand's character is tedious, and he makes faces all the time. He is not even a threat, really, but somehow, he has considerable screen time.

The worst part of the movie is its dialogues - outdated and meaningless. The production design is bland, and the music is average. Even the song sequences are shoddily choreographed.

Sketchy and absurd, Blood Money does not leave you hungering for more. In fact, the rather predictable end with a humdrum twist takes forever to get over, and you may wonder what it was all about. Watch The Firm, the Tom Cruise starrer that Blood Money seems inspired from, instead.
Share. Save. Connect.
Tweet
BLOOD MONEY SNAPSHOT 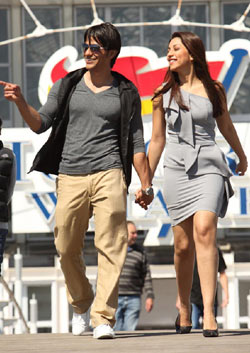 ADVERTISEMENT
This page was tagged for
b.h.m movie Blood money
Blood Money hindi movie
Blood Money reviews
release date
Kunal Kemmu, Amrita Puri
Follow @fullhyderabad
Follow fullhyd.com on
About Hyderabad
The Hyderabad Community
Improve fullhyd.com
More
Our Other Local Guides
Our other sites
© Copyright 1999-2009 LRR Technologies (Hyderabad), Pvt Ltd. All rights reserved. fullhyd, fullhyderabad, Welcome To The Neighbourhood are trademarks of LRR Technologies (Hyderabad) Pvt Ltd. The textual, graphic, audio and audiovisual material in this site is protected by copyright law. You may not copy, distribute, or use this material except as necessary for your personal, non-commercial use. Any trademarks are the properties of their respective owners. More on Hyderabad, India. Jobs in Hyderabad.