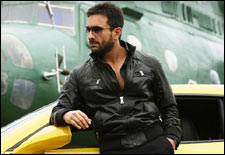 Shruthi / fullhyd.com
EDITOR RATING
6.5
Performances
Script
Music/Soundtrack
Visuals
8.0
6.0
7.0
7.0
Suggestions
Can watch again
Yes
Good for kids
No
Good for dates
Yes
Wait for OTT
No
Our man in caught in Afghanistan, is bound and beaten in a terrorist stronghold, and is almost good to be killed. No wait - but it's Agent Vinod! He exposes a mole amongst the terrorists; promises to expose another one; gets the leader and all his terrorists boys scrambling to nail this mole; cleverly frees himself; kills the bad boys; and as if that wasn't enough, also manages to free a dancing girl from their den; fits in a nice action sequence; and manages to be cool enough to tell the girl at the end of it all, "Aasha hai aapki yatra sukhad rahi".

Agent Vinod sure starts with a bang, but this hair-raising excitement doesn't really spill over into the rest of the movie, as it meanders through some pretty guessable turns and manages to compensate for some clever lines and good performances with a clichÃ©d plot and an overdose of brawn.

Agent Vinod (Saif Ali Khan) is an undercover RAW agent who is on a mission to uncover an international conspiracy. It's a definite Hawala case, which involves some mysterious numbers, and might also be connected to a nuclear warhead that is up for sale.

AV, after killing one international gangster (Ram Kapoor, on a bad hair day) and all his men in a crowded pub (uh-oh, but he's almost Bond no?), neatly lands up in Morocco, impersonating the gangster's messenger. In Morocco, he meets Iram (Kareena Kapoor), another undercover agent with a not-very-straightforward past, who only reports to our neighboring country's ISI chief.

Together, as the story unfolds, Iram and Vinod follow the clues and baddies across exotic destinations all over the world, find time to talk about life and stuff, find that critical piece that is the thing that everyone is chasing, manage to lose it, and chase it all over again to a bomb-with-a-timer climax (really, now). That the end is not altogether predictable is lost, given the predictability of most of the movie.

What stops the movie from being an edge-of-the-seat spy thriller is the story. While the movie does begin with a bang, the storyline and the turn of events are so insipid that they manage to cast a shadow on the more entertaining aspects of it. The plot looks rehashed, hardly managing to thrill or surprise, and it's no reassurance that a supposedly clever spy movie has more brawn than brain.

But it's really the performances that save the movie all the way. Those, and some witty one-liners that only Saif could have said. He fits in well, and stylishly; and lends personality to a character that could have been better written.

Kareena Kapoor, as the accidental agent, not only manages to have a substantial role in the film, but also manages to hold her own in this mostly-male movie. And their romance, refreshingly enough, doesn't go overboard. They romance in bits and pieces, during times of respite from guns and baddies, and manage to look gorgeous together.

The music is quite decent, like the beautiful "Rabta" track that is, interestingly, a romantic number shot while the hero is killing goons by the dozen. The Bond-style theme blends in well, too. And the various familiar faces in cameos and short parts - Ravi Kishan, Ram Kapoor, Gulshan Grover, Prem Chopra, Dhritiman Chatterjee, and Shahbaaz Khan et al - are well utilized.

Agent Vinod is a film that held great potential - with its cast, director, and genre. And although the film provides flashes of great entertainment in bits and pieces, it mostly manages to be another spy movie with only a great cast to feast your eyes on.
Share. Save. Connect.
Tweet
AGENT VINOD SNAPSHOT 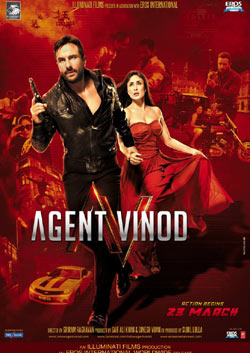