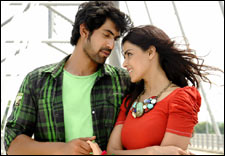 Deepa Garimella / fullhyd.com
EDITOR RATING
4.0
Performances
Script
Music/Soundtrack
Visuals
6.0
4.0
6.0
6.0
Suggestions
Can watch again
No
Good for kids
No
Good for dates
Yes
Wait to rent it
Yes
Sometimes, excellence is the only way out. At other times, when your life doesn't depend on it, when you know you have another chance - as many chances as you want, actually - you have mediocrity to bank upon.

And thus, Naa Ishtam. The movie follows the standard template of commercial productions, and ends up as yet another stepping stone for RaNa Daggubati to build his career with, and as yet another Friday offering for us audiences to sleep through.

The story starts with us being introduced to the selfish Ganesh (RaNa), who lives in Malaysia, and, as we are told, is selfish and never goes out of his way to help someone in need. He runs into Krishnaveni (Genelia), a helpless little damsel who has been dumped at the altar by her boyfriend.

Ganesh rescues her from human traffickers, and takes her to her home in Mandapeta, only to haul her out of there again after discovering that she was being forced to marry a jerk there. Next, Ganesh falls in love with Krishnaveni, Krishnaveni's boyfriend (Harshavardhan Rane) shows up, and Krishnaveni's family is out to kill Ganesh.

That this film was made by a debutant director is pretty apparent. Further, director Prakash Toleti, a Sukumar (famous for Arya and Arya 2) protege, doesn't hide the inspiration the latter seems to have made on his work.

While this film has a very Sukumar-esque hero, there is no smart writing, no tugging of heartstrings, and no impressive romance to speak of. Basically, the movie fails to connect at a very fundamental emotional level. It's hard to say whether the RaNa and Genelia have any on-screen chemistry, since they don't spend enough time together. Added to that are the zillion fight scenes that seek to create some sort of a tension but only lengthen the ordeal.

Some of the developments are handled quite clumsily - like the whole bit with Ganesh manipulating Krishnaveni's boyfriend. The comedians present don't make much of an impact either. There's a scene in which RaNa, alarmingly enough, attempts an Allari Naresh - dressed in a feathered hat and bright clothes, and knocking at the door of his beloved before he proposes to her. Sadly, it doesn't gel.

Naa Ishtam requires RaNa to be bigger and better than the film, and he is not. While he has the build, the looks and the lineage to be a hero, he has a long way to go before he can smoothen out his rough edges, loosen his stiff dance moves, and shed a few inhibitions. For the moment, he might succeed with roles that need him to be brooding and intense; and with directors who know what to do with him.

Genelia was probably chosen for the cherubic appearance and innocent demeanor this role needed, and she must have been in this for the paycheque. Harshavardhan Rane looks a little too young for his part, and he could have let a Telugu-speaking person dub for him. Brahmanandam hams to no effect, Ali manages to evoke a few giggles, and Raghu Babu is funny as always.

Chakri's music lacks soul and energy, but the songs are bright and colourful. And audiences are beyond being fascinated by the Malaysian visuals - or whatever was used to create "Malaysia".

The movie isn't terrible, but is just not good enough. If that works for you, by all means, watch it.
Share. Save. Connect.
Tweet
NAA ISHTAM SNAPSHOT

ADVERTISEMENT
This page was tagged for
Naa Ishtam telugu movie
Naa Ishtam reviews
release date
RaNa Daggubati, Genelia D\'Souza
theatres list
Follow @fullhyderabad
Follow fullhyd.com on
About Hyderabad
The Hyderabad Community
Improve fullhyd.com
More
Our Other Local Guides
Our other sites
© Copyright 1999-2009 LRR Technologies (Hyderabad), Pvt Ltd. All rights reserved. fullhyd, fullhyderabad, Welcome To The Neighbourhood are trademarks of LRR Technologies (Hyderabad) Pvt Ltd. The textual, graphic, audio and audiovisual material in this site is protected by copyright law. You may not copy, distribute, or use this material except as necessary for your personal, non-commercial use. Any trademarks are the properties of their respective owners. More on Hyderabad, India. Jobs in Hyderabad.