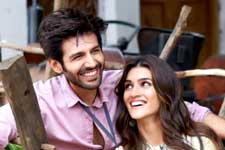 Punarvasu Pendse / fullhyd.com
EDITOR RATING
5.5
Performances
Script
Music/Soundtrack
Visuals
7.0
5.0
4.0
6.0
Suggestions
Can watch again
No
Good for kids
No
Good for dates
Yes
Wait for OTT
Yes
Lukka Chuppi, director Laxman Utekar's take on live-in relationships and marriage with an added flavour of small-town India, is a situational comedy from the onset, and one that largely sticks to that line. It may have its issues, but at the very least you chuckle multiple times through its 127-minute run time (I am looking at you). And Utekar mostly succeeds in staying away from lecturing on morality.

Lukka Chuppi is a story of two journalists who meet as colleagues in Mathura. The large, joint family of Guddu Shukla (Kartik Aryan) owns a humble saree shop. The father of Rashmi Trivedi (Kriti Sanon) is a local politician who specifically targets young people in live-in relationships, a rather dark reference to a certain group that picks on couples during Valentine's Day. So when the duo, now stationed on work in Gwalior, decide to experiment with a live-in relationship to "practice" before marriage, the stage becomes set to lead both families into chaos.

It all starts promisingly enough, but the relationship soon almost gets discovered by an annoying relative, and the hapless couple get involved in a massive cover-up. Tensions arise from their continued efforts to hide their situation, and everything blows up during a climactic Hindu mass wedding ceremony. Guddu's happy-go-lucky friend and cameraman Abbas (Aparshakti Khurana), who gets roped along into their plan, adds a good number of laughs all through.

The high point of the script is that it gets you rooting for the couple from the get-go. Kriti Sanon plays the happy, upbeat girl to perfection in the opening minutes of the movie, and Kartik Aryan slowly catches up. Their easy chemistry is enjoyable, and they play off each other to good effect for the majority of the movie, with a bit of help from Khurana in a few scenes. But the good news pretty much ends there. The film tries to tackle too many social issues, including religion, caste, economic differences, gender and moral activism, and even if it tries to do that in a light vein, it ends up being a bit much.

Then, the first half tends to meander at some points, and doesn't do a good enough job at showing how the couple fell for each other in the first place. They also don't blend too well into the small-town setting. A lot of the film's humour is also derived from situations that wouldn't normally arise in a small town, making them appear unnatural even if funny. And some of the gags get repetitive, like those involving the unmarried older brother. The second half is relatively well-paced, and the cast really gets to shine, but the writing comes off as a bit too preachy at the end.

Kartik Aryan seems a little out of place in a small-town setting, but he tries earnestly to deliver what the script demands of him. Kriti Sanon is vivacious and her performance feels effortless at times, but she too is caught in a similar trap, and comes off a little larger-than-life. Pankaj Tripathi plays the annoying brother-in-law as best as he can, but you get the feeling that his role could have been written better.

Vinay Pathak relishes the opportunity of playing an aging politician, an avatar we haven't seen him in before, and delivers a commanding performance. Aparshakti Khurana acts well on the whole, but stumbles at the comic bits in some scenes.

The music is largely a remix album, with all five tracks being reducia of popular songs - both old and new. The songs themselves don't feel too out of place - or artificially increase the length of the movie, since a couple of them are played during the credits.

Lukka Chuppi is unlikely to make it to your all-time favourite list, but if that's not too important a filter for you, can be a reasonably entertaining option this weekend.
Share. Save. Connect.
Tweet
LUKA CHUPPI SNAPSHOT 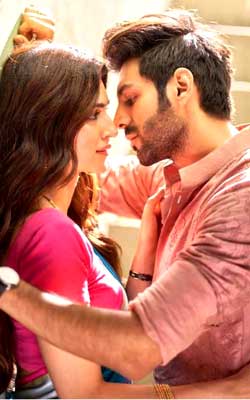 ADVERTISEMENT
This page was tagged for
luka chuppi review fullhyderabad
Luka Chuppi hindi movie
Luka Chuppi reviews
release date
Kartik Aaryan, Kriti Sanon
Follow @fullhyderabad
Follow fullhyd.com on
About Hyderabad
The Hyderabad Community
Improve fullhyd.com
More
Our Other Local Guides
Our other sites
© Copyright 1999-2009 LRR Technologies (Hyderabad), Pvt Ltd. All rights reserved. fullhyd, fullhyderabad, Welcome To The Neighbourhood are trademarks of LRR Technologies (Hyderabad) Pvt Ltd. The textual, graphic, audio and audiovisual material in this site is protected by copyright law. You may not copy, distribute, or use this material except as necessary for your personal, non-commercial use. Any trademarks are the properties of their respective owners. More on Hyderabad, India. Jobs in Hyderabad.