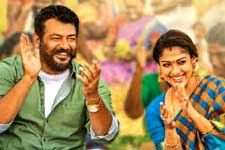 If your answer is to study well, bathe in the tears shed after any previous failures, and look to your side and work harder than the person next to you, then you are sorely mistaken and are most probably a topper. If you are, kindly watch 100% Love. This is not the movie for you.

So, we ask the normies out there, how do you pass an exam?

Firstly, you figure out what the passing grade is. Because knowing that is half the battle.

Your average high school topper shoots for the stars, lands on the moon, and is disappointed by his/her lack of total success. But director Siva and his star Ajith Kumar shot for the moon on a bright and sunny day and crashlanded on Earth with their previous venture, Vivekam. With no clear vision or target, their aimless Bond rip-off shot itself in the foot.

This time around Siva goes back to basics. The director asks himself, "What does a general audience look for in their entertainment?" A bit of comedy, a bit of action, a bit of sentiment (mother, daughter, brother, father - pick one), a few songs, a few dances, a pretty heroine, a hero with a dedicated fanbase, and a time-tested story with a relevant message. Success leaves clues, and these clues are easily traceable. Remember when you went through question papers from previous exams? Exactly.

The well-worn story of Viswasam follows two specific chunks in the life of Veraraju (Ajith Kumar). He was a violent yet charming man in his youth. Amidst the bloodshed, he wooed doctor-in-training Niranjana (Nayantara). However, his propensity to draw conflict upon himself and his loved ones resulted in his wife walking away from their marriage. A decade of separation later, Veraraju journeys to Mumbai as he tries to reconnect with his estranged wife and teenaged daughter, Swetha (Anikha).

If this plot brings you not-so-fond memories of Venkatesh starrer Tulasi, you are not wholly mistaken. There is an eerie similarity between the two stories, and we are not limiting those to Nayantara's inexplicable appearance as the estranged wife in both projects (which are 12 years apart). However, Tulasi and most films of that ilk are crowd pleasers. Crowd pleasers equal family audiences. Family audiences equal money. And money equals a passing grade in business circles.

Plagiarism is only a problem if you copy the answer to a question word for word. Move some sentences around, restructure the prose, resolve a different conflict and show the passage of time by greying up the leading man's hair, and you can just about dodge an evaluator's fleeting attention. When none of those schemes works, the makers of this film throw everything else at the wall to see what sticks, and hope that flashy colours and broken bad guy bones keep their more excitable audience members blissfully entertained. There is indeed something in it for everyone.

As much as we like to joke about it, we believe that aiming for a passing grade is nothing to sneeze at. A few of us here were not the best of students back in the day. As much as topping an exam requires hard work, determination and focus, getting through one without studying requires ingenuity, improvisation and sheer force of will. One needs to possess the skills to sell ice to an Eskimo to do that. In that vein, director Siva and his team just about manage to do sell enough ice to enough unsuspecting Eskimos to make their venture a success.

They do this by spray-painting a delectable coat of Ajith Kumar charm, Nayantara grace and a delightful father-daughter relationship onto a very ordinary block of ice. While the two leads are charismatic enough to make the average film palatable by themselves, their efforts are aided, at times, by the film's emotional core. There is a likability to the crackling chemistry shared between Veraraju and his daughter, and when that dynamic is inverted by the toxicity shared between the villainous Gautham Veer (Jagapathi Babu doing his best usual Jagapathi Babu performance) and his daughter, the movie's message gets more cogent and hits home when it matters the most.

This climactic win is essential for the film as most other aspects of its presentation are wholly forgettable. A few mass-y and folksy songs, a loud background score and a vibrant colour palette do little to distinguish the movie from the slew of star-centred cinematic experiences that are set in the rural parts of our state/country. Then again, all of what you try needn't succeed when your goal is a passing grade. Only most of it must.

Screenwriting guru Robert McKee says, "Wow an audience in the third act and they'll forgive and forget all the other shortcomings of your film." Writer/director Siva takes that advice to heart and crafts a third act that is in a different league when compared to the film that precedes it. And with that third act flourish, he manages to partially redeem himself from the travesty that was Vivekam. This one earns only a partial redemption and a passing grade from us as we spend our days parsing through every word of every sentence in every answer, but we do have a sneaky suspicion that a general audience might be a tad more lenient.
Share. Save. Connect.
Tweet
VISWASAM SNAPSHOT 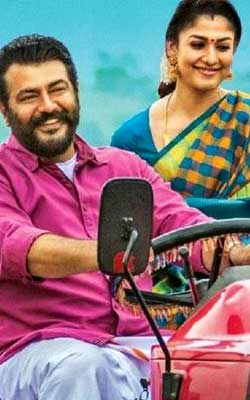 ADVERTISEMENT
This page was tagged for
viswasam telugu full movie
Viswasam telugu movie
Viswasam reviews
release date
Ajith Kumar, Nayanthara
Follow @fullhyderabad
Follow fullhyd.com on
About Hyderabad
The Hyderabad Community
Improve fullhyd.com
More
Our Other Local Guides
Our other sites
© Copyright 1999-2009 LRR Technologies (Hyderabad), Pvt Ltd. All rights reserved. fullhyd, fullhyderabad, Welcome To The Neighbourhood are trademarks of LRR Technologies (Hyderabad) Pvt Ltd. The textual, graphic, audio and audiovisual material in this site is protected by copyright law. You may not copy, distribute, or use this material except as necessary for your personal, non-commercial use. Any trademarks are the properties of their respective owners. More on Hyderabad, India. Jobs in Hyderabad.