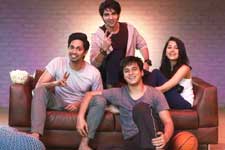 Punarvasu Pendse / fullhyd.com
EDITOR RATING
3.0
Performances
Script
Music/Soundtrack
Visuals
4.0
3.0
4.0
7.0
Suggestions
Can watch again
No
Good for kids
No
Good for dates
Yes
Wait for OTT
Yes
Like romance, friendship is a Bollywood staple for drama. It is very hard to make a genre-defying film on a topic where every idea you come up with is most likely already a cliché, but Hum Chaar doesn't even make an attempt to provide anything new.

Writer and director Abhishek Dixit tries to play it safe, except for the one twist that goes against the Rajshri films norm. The writing, however, feels sluggish, and the length of the movie does not do it any favours.

Hum Chaar begins with a mid-twenties Namit (Prit Kamani) informing you that one message can change a person's life. With that premise set up, the movie launches into a full-blown flashback to four years back that details the lives of three guys, all senior medical students, and a female fresher. Despite an initial frostiness, the girl soons join the little band of brothers. You might wonder how medical students get so much time to goof around, but the bonding between the four friends forms the crux of the story in the first half.

The movie takes you back to the present post-intermission, where each of the four is leading an unfulfilled life, post a rough fallout. A chance encounter, and a resolute subsequent decision put all of them back in their old proving grounds, the medical school/hospital which they were all kicked out of. This test of friendship goes through soap-opera levels of drama and takes 144 minutes to resolve itself.

The little camaraderie that the four protagonists share for a brief time in the first half is the only highlight of the movie. The script also does try to make points about platonic love versus romantic love that are relatable to, and the thin line separating the two, but that makes it even more of a pity that enough time isn't devoted to it.

The script does very little to set itself apart from similar stories. The plot feels very stretched, and at times almost unnecessary, like pretty much any scene with the family of Manjari (Simran Sharma). The fallout between the friends does not seem very believable, and gives rise to forcible, vacillating drama. The songs don't do much for the movie, which is ironic considering how Rajshri considers the music an additional selling point for its productions.

None of the four protagonists stands out in any way, with each being unequivocally average. Prit Kamani's Namit is the most disappointing, if only for the fact that he had the meatiest role in the movie and yet doesn't manage to make anything memorable out of it. He gives a whole new meaning to Manjari's quip "Amit ho ya Namit..." because of how irrelevant his character is. Simran Sharma plays the strong and unapologetic Manjari, but seems unconvincing in the emotional bits, especially in the fairly important "drunk" scene.

To be fair to Anshuman Malhotra and Tushar Pandey, their characters (Abeer and Surjo, respectively) feel like caricatures of themselves, and serve the purpose only of being the stereotypes you meet in every educational institute. Pandey especially seems to stick to his character to a fault, almost to the point of overacting.

Get a decent cinematographer and add high production values, and you get a movie that doesn't really look bad most of the time. But none of it can make up for a complete lack of coherence. Hum Chaar is patchy in terms of plot, moves along at a snail's pace, and is completely unmemorable. Wait for it to hit the small screen - or better still, just don't.
Share. Save. Connect.
Tweet
HUM CHAAR SNAPSHOT 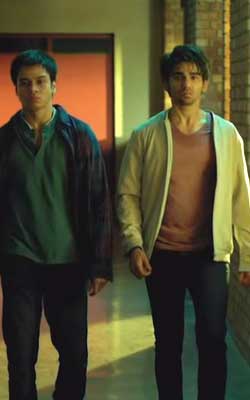 ADVERTISEMENT
This page was tagged for
Hum Chaar hindi movie
Hum Chaar reviews
release date
Prit Kamani, Simran Sharma
theatres list
Follow @fullhyderabad
Follow fullhyd.com on
About Hyderabad
The Hyderabad Community
Improve fullhyd.com
More
Our Other Local Guides
Our other sites
© Copyright 1999-2009 LRR Technologies (Hyderabad), Pvt Ltd. All rights reserved. fullhyd, fullhyderabad, Welcome To The Neighbourhood are trademarks of LRR Technologies (Hyderabad) Pvt Ltd. The textual, graphic, audio and audiovisual material in this site is protected by copyright law. You may not copy, distribute, or use this material except as necessary for your personal, non-commercial use. Any trademarks are the properties of their respective owners. More on Hyderabad, India. Jobs in Hyderabad.