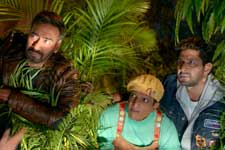 Punarvasu Pendse / fullhyd.com
EDITOR RATING
3.5
Performances
Script
Music/Soundtrack
Visuals
5.0
3.0
4.0
3.0
Suggestions
Can watch again
No
Good for kids
Yes
Good for dates
No
Wait for OTT
Yes
A slapstick action-comedy with an all-star cast, good production values and the added hype of being part three in a series would generally be considered a safe option to watch in most cases. Total Dhamaal would like you to reconsider this argument.

Yet another of Indra Kumar's loud comic capers that lack any semblance of subtlety, Total Dhamaal is basically a series of dubiously funny gags that seem to almost insult the audience's intelligence. It goes back to the same plot as the first movie - a bunch of bumbling idiots find the clue to locating a large sum of money from a dying person, and every single character tries to one-up the rest in stupidity as they try to grab all the cash for themselves.

A man wanting to be a "bada aadmi" and his sidekick (Ajay Devgn and Sanjay Mishra respectively), a bickering couple who have agreed to a divorce (Anil Kapoor and Madhuri Dixit), an idiotic pair of brothers (Arshad Warsi and Javed Jaffrey), two firemen fired for accepting a bribe (Riteish Deshmukh and Pitobash Tripathy), and finally the corrupt Commissioner and his lackey police officer (Boman Irani and Vijay Patkar) race against each other to get their hands on Rs 50 crore, the cut Irani's character takes for converting Rs 100 crore of pre-demonetisation notes to newer currency.

Street cars, jeeps, no-brand luxury cars with the world's most advanced GPS system, remote-controlled futuristic antagonistic cars, bikes, parachutes, helicopters, aeroplanes - Total Dhamaal's morons leave nothing alone in a bid to reach the coveted booty ahead of each other. Literally each of the above is totalled in their attempts - drowned, abandoned, deflated, exploded, crashed, and kicked out of a plane - and by this time we are still only halfway through the movie. The second half sets the stage of the climax to the most ridiculous zoo ever, with literally 5 exhibits and a "security" monkey.

The writing and the effects wrestle each other to for supremacy in mediocrity. The writing lazily continues Bollywood's love affair with misogyny (husband woes due to "opinionated" women) and tropes likes bashing on cultural differences. The biggest crime the script commits, though, is providing lines with zero punch to actors with very good comic timing. Hell, the ridiculous CGI animals in the second half show more purpose at times.

The excellent chemistry shared by Anil Kapoor and Madhuri Dixit makes their pairing work despite the shoddy writing. Comic stalwarts like Boman Irani are however seriously hampered by the total lack of any remarkable lines. There are very visible loose ends in the film, like the fate of Johnny Lever's character. There was a great deal that could have been done with the amount of talent Kumar had at his disposal, which makes Total Dhamaal's execution all the more tragic.

Ajay Devgn is distinctly average as Guddu, and it rubs off on the otherwise excellent Sanjay Mishra whose character literally annoys you by his constant utterances of "bro". Anil Kapoor and Madhuri Dixit do a commendable job despite being weighed down by the script, and easily steal the (very abysmal) show. Warsi and Jaffrey return as Adi-Manav, the two brothers who are perpetually being chased (by poorly done computer-generated vultures and a car on fire in this instance). Riteish Deshmukh plays a thoroughly unconvincing Bhojpuri "Lallan", and Pitobash Tripathy simply feels like his tacked-on accomplice. Boman Irani gets slapped around, both literally by the other characters and figuratively by the script.

The music is nothing special, and not one song has you humming along. It borrows from older hits, but does not do justice to them. The CGI is astonishingly poor, and makes a bad script even less believable. The animals, in particular, are so unrealistic that it almost seems deliberate.

What makes this review genuinely hard to write is the feeling of sanctimoniousness it gave me during the viewing experience. On one hand, Total Dhamaal clearly vexed my sensibilities. On the other, there was constant whistling from not one but three places in the theatre I watched it in. So if you have young children under the age of ten, or loved similar drivel from Indra Kumar like Grand Masti, you will probably enjoy the cinematic experience.

If however, like me, your idea of comedy doesn't including laughing at "fart gallery" (with accompanying sounds, so as to leave nothing to the imagination), give Total Dhamaal a wide berth. 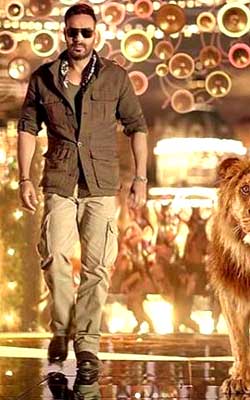 ADVERTISEMENT
This page was tagged for
Total Dhamaal hindi movie
Total Dhamaal reviews
release date
Ajay Devgn, Riteish Deshmukh
theatres list
Follow @fullhyderabad
Follow fullhyd.com on
About Hyderabad
The Hyderabad Community
Improve fullhyd.com
More
Our Other Local Guides
Our other sites
© Copyright 1999-2009 LRR Technologies (Hyderabad), Pvt Ltd. All rights reserved. fullhyd, fullhyderabad, Welcome To The Neighbourhood are trademarks of LRR Technologies (Hyderabad) Pvt Ltd. The textual, graphic, audio and audiovisual material in this site is protected by copyright law. You may not copy, distribute, or use this material except as necessary for your personal, non-commercial use. Any trademarks are the properties of their respective owners. More on Hyderabad, India. Jobs in Hyderabad.