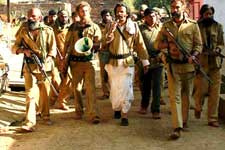 Punarvasu Pendse / fullhyd.com
EDITOR RATING
7.5
Performances
Script
Music/Soundtrack
Visuals
8.0
7.0
7.0
8.0
Suggestions
Can watch again
Yes
Good for kids
No
Good for dates
No
Wait for OTT
No
Sonchiriya is a movie that is larger than life - and it also has a longer running time than most movies nowadays. Which is mostly used well - the movie presents an imagery so rich, music so in-tune with the events, and a bunch of characters that get you so invested right from the beginning, that you almost experience regret that the era of dacoity is now over.

Director Abhishek Chaubey puts great focus on authenticity in this period drama, and the characters all feel like they belong. He invites us to go down a rabbit hole where right or wrong depends upon whose point of view you choose to look at, and the only law that applies is that golden postulate of nature - the hunter can become the hunted.

Sonchiriya's premise is straightforward - the "baaghi" (rebel, which sounds more compelling than the more common "dacoit") trying to escape law enforcement, in search of the ever-elusive mythical golden bird but led on a wild goose chase instead. The men of Daku Man Singh (Manoj Bajpayee) are on the run from Gujjar (Ashutosh Rana) who has made hunting down dacoits somewhat of a personal vendetta.

The first half is tight, and gripping with all the things you would expect from a story set in the Chambal - heists, loot, police chases, gunfights and a liberal sprinkling of violence. A (relatively) peaceful attempted heist goes wrong, causing all sorts of problems in the ranks of the rebels, which further intensify when they accept a desperate woman and her young sister into their midst.

The second half is where the movie gets interesting, and moves away from the general perception of dacoits by Bollywood. They are rebels with a conscience, and even if they kill (and they kill plenty of people, mind you), it is not with the intention of being lawless looters. As Man Singh, and Vakil Singh (Ranvir Shorey) after him, keep reminding Lakhna (Sushant Singh Rajput), Baaghis have their "dharm" the same way the police have theirs.

The writing is on point, but subtitles are a necessity due to the majority of the film being in coarse Bundelkhandi, which also adds to the authenticity. The script pays homage to the Spaghetti Western, with Mexican standoffs and sweeping action sequences. It blends a toxic mash-up of caste, misogyny, violence and natural law onto arid land and dimly-lit homes, ensuring that there are no winners at the end.

Despite the unique decision to steer away from Bollywood tropes, however, the second half becomes the weak link in an otherwise splendid movie, simply due to its length. Chaubey, and writer Sudeep Sharma, lose their grip on the story a little bit, and the film slows down. This is evident especially when the script lets you sense tension but fails to build on it.

The other issue with the movie is that it doesn't hit you as hard for a movie that is set in the same period as Bandit Queen. (And what is it about the Chambal region that has inspired such memorable films?)

Sushant Singh Rajput is fantastic as the loyal baaghi with a good heart. He does justice to his rule, and speaks few words but manages to convey his character's emotions well. Bhumi Pednekar has no problems playing a feisty woman who has to travel with the dacoits out of desperation. The fact that neither of the two has any star value in the film works tremendously to its advantage.

Manoj Bajpayee brilliantly plays a character based on the real Man Singh, who was loved by the locals despite his run-ins with the police, managing to uncannily portray compassion despite being the leader of dacoits. Ranvir Shorey is a revelation - you wonder why more directors are't giving him such roles instead of just comedy. He laughs once during the whole movie, and that is in despair.

Ashutosh Rana is the fearsome cop chasing down the rebels, and manages to make the small part feel important. The supporting cast, especially the bandits, are all very believable, and you feel for them.

The music is fantastic, and manages to capture the broken spirit of the characters, who are all out to look for their own sonchiriyas. The title song, in the boat scene, especially manages to evoke the utter helplessness of the situation.

Sonchiriya is a rare film, one that has emotions create more spark than gunfire. Don't get me wrong - the action is fantastic too, but the movie is all heart, and definitely worth catching this weekend.
Share. Save. Connect.
Tweet
SONCHIRIYA SNAPSHOT 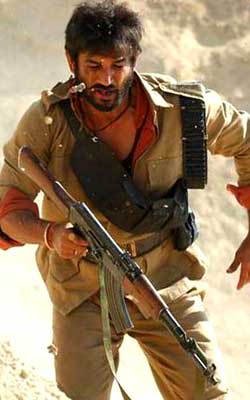 ADVERTISEMENT
This page was tagged for
sonchiriya movie full in hindi downtown
sonchiriya movie show time in hyderabad
Sonchiriya hindi movie
Sonchiriya reviews
release date
Follow @fullhyderabad
Follow fullhyd.com on
About Hyderabad
The Hyderabad Community
Improve fullhyd.com
More
Our Other Local Guides
Our other sites
© Copyright 1999-2009 LRR Technologies (Hyderabad), Pvt Ltd. All rights reserved. fullhyd, fullhyderabad, Welcome To The Neighbourhood are trademarks of LRR Technologies (Hyderabad) Pvt Ltd. The textual, graphic, audio and audiovisual material in this site is protected by copyright law. You may not copy, distribute, or use this material except as necessary for your personal, non-commercial use. Any trademarks are the properties of their respective owners. More on Hyderabad, India. Jobs in Hyderabad.