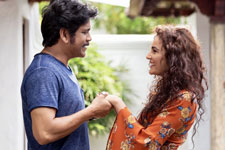 T J Reddy / fullhyd.com
EDITOR RATING
3.0
Performances
Script
Music/Soundtrack
Visuals
5.0
2.0
2.0
4.0
Suggestions
Can watch again
No
Good for kids
No
Good for dates
No
Wait to rent it
Yes
Before we get to work here, I want to ask the makers of this movie two questions:

Without answers to these two most basic of questions, director Ohmkar writes and directs a spiritual sequel to his previous hit Raju Gari Gadhi. Sure, there's nothing in a name, but it's not something you'd expect of any fine filmmaker.

Also, as a disclaimer to all my brothers who intend to watch this one with their lady loves hoping for scared arm-clinging, kindly leave those thoughts at the door as this movie is a rooster (avoiding the C word here) blocker.

Holding the biggest selling points (Nagarjuna and Samantha) back for the first half of the movie are its trio who supposedly put the "comedy" in horror comedy, Vennela Kishore, Shakalaka Shankar and Ashwin Babu. The men are inexplicably booted out of their houses for wanting to go into business by opening a beachside resort. They take the ass-kicking with a smile as their resort is frequented by only two sets of people - light bright supermodel types or "fat" ones who are comedy fodder. And lest you forget - neither the men nor the women have any characters written for them.

Because there are no other men to be found around these parts, a female spirit haunts them when they express their masculine urges. Be it over Skype or by watching Sunny akka's videos or by taking pictures of a woman with her consent, none of them will be spared the wrath of this woman scorned. Terrified at the prospect of losing their customer base and their business, they approach the 'roided out superhuman brother of Rajinikanth in Chandramukhi, Rudra (Nagarjuna).

Rudra is amongst many things, A Mentalist. A highly educated man of science, Rudra casually asks his many adoring fans (who are the Commissioner of Police and priests for some reason), and in turn the viewers, to abandon logic and reason in his introductory scene. Sadly, I did not. To my dismay, the movie showcases Rudra's abilities with a painfully constructed 5-minute sequence. After the audience has been assured that Rudra is the baddest-ass that ever assed, the film resumes as Rudra attempts to uncover the secrets of who is haunting the resort, why she is haunting it, and what she has to gain from doing so (these are straight from the movie).

Alright, I've been nice to this movie enough. Simply put, watching this one is like eating at McDonalds - it seems fine on the surface, but for the love of God, do not ask what's in it. So if any of you is an audience member looking to kill a couple of hours at the movies by switching off the analytical left of your brain, be Ohmkar's and Rudra's guest, but if logic, storytelling and good cinema are what you seek, be MY guest.

Movies like this one are what I dread when walking into cinemas. They have almost every problem I see with archaic cinema pretending to be modern and socially aware. This is a film that suggests that men should never look at women "in the wrong way" while constantly and gratuitously movieing one of its major female characters going for the very thing it advocates against. Believe you me, this is no self-referential art-house movie asking complex questions of its audience by subverting genre tropes.

While that is my ding against the moviemakers and their crass, self-serving commercialization, every other issue that arises with this film is solely attached to its story. This is a movie that implies Rudra can walk into a room and literally see every event that has occurred there, but cannot solve a suicide without sleuthing around for evidence. The film's character-writing fares no better. Samantha's unsubtly named Amrutha is designed to gain maximum sympathy from the audience by having a dead mother and loving father, topping law colleges, dressing "appropriately" and not having friends (be it girl or boy). This might seem nit-picky but choices like this perpetuate the myth that only a "decent" girl and her plights need to be cared for while women who don't fit this mould are primed for objectification.

In addition to its inconsistencies in the story and the characters and their powers, the movie's technical values are disappointing, too. Its bland look and feel affect it to such a degree that jump scares are rarely effective, and when that is combined with needlessly loud background scores and Nagarjuna and Samantha sleepwalking through their roles, the film becomes a task to get through.

The only good excuse for watching this film would be that you are in movie class and have been tasked with watching It Follows, Chandramukhi, The Mentalist and Lens for some ungodly reason and are trying to save up on time. Chronicle your experiences of watching this incomprehensible exercise in moviemaking while screaming at the screen for reusing shots and asking why the almighty Rudra did not end the movie at the halfway mark to spare your intrepid soul.
Share. Save. Connect.
Tweet
RAJU GARI GADHI 2 SNAPSHOT 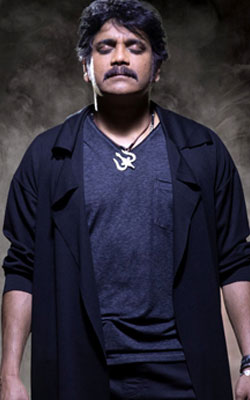 ADVERTISEMENT
This page was tagged for
Raju Gari Gadhi 2
Raju Gari Gadhi 2 telugu movie
Raju Gari Gadhi 2 reviews
release date
Nagarjuna Akkineni, Samantha Akkineni
Follow @fullhyderabad
Follow fullhyd.com on
About Hyderabad
The Hyderabad Community
Improve fullhyd.com
More
Our Other Local Guides
Our other sites
© Copyright 1999-2009 LRR Technologies (Hyderabad), Pvt Ltd. All rights reserved. fullhyd, fullhyderabad, Welcome To The Neighbourhood are trademarks of LRR Technologies (Hyderabad) Pvt Ltd. The textual, graphic, audio and audiovisual material in this site is protected by copyright law. You may not copy, distribute, or use this material except as necessary for your personal, non-commercial use. Any trademarks are the properties of their respective owners. More on Hyderabad, India. Jobs in Hyderabad.