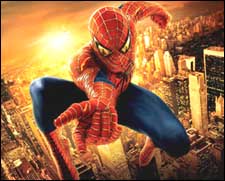 Deepa Menon / fullhyd.com
EDITOR RATING
8.0
Performances
Script
Music/Soundtrack
Visuals
NA
NA
NA
NA
Suggestions
Can watch again
NA
Good for kids
NA
Good for dates
NA
Wait for OTT
NA
What is it that we love about Spiderman? That he can run up the side of a skyscraper? That he can leap up 40 feet in the air without bending his knees? That he can save the planet merely by swinging along on a sliver of spit (yes, that's what it's made of)? No, what we love most about Spiderman is that he is a regular guy who can run up the side of a skyscraper, leap up without bending his knees and save the planet on a sliver of spit. But even superheroes have the occasional off day. And Peter Parker's simply does not end.

First there's his fast-track career in the pizza delivery industry, but 29-minutes-or-less does not account for time spent rescuing children from hurtling buses. School isn't so bad, though, except he's flunking. On the emotional front, he's still reeling from the guilt of his uncle's death. His aunt is going to lose her home to the bank and the rent on his dumpster is long overdue. His best friend is angry with him for protecting his (friend's) father's killer. Plus, Mary Jane is marrying another man. And on top of all that, he's getting no wrist action.

Somewhere between the time that he leaps off a high-rise and makes a safe landing, Spiderman discovers he can't fly no more. And the accelerated crash into a stinky puddle doesn't hurt as much as the realization that he doesn't have to be doing this. He could be out there leading a normal life, minus the wailing sirens, soaring adrenaline and continuous wear and tear on his Spider-suit.

But destiny, my friend, is bigger than the both of us. Also bigger than the both of us is Doc Ock, the brilliant scientist who miscalculated and turned himself into a giant spider. One painful experiment later, Ottoman Octavius is miserable, 'morseful and mean. Not only has he lost his wife, now he also has two pairs of hands that control him. We know some people like that.

Doc Ock's switchover to the dark side is not very convincing, sort of like he's thinking, 'Why not terrorize people and aim for world domination, I have the arms for it.' But it's not important, because Spiderman 2 is not just about the battle with Ock, it's also the rousing of the spirit of Green Goblin, our hero's arch nemesis, whose son is feeling very vindictive and very sloshed. More on that later, in 2007, when Spiderman 3 hits the screens.

Film in question, in the meanwhile, has its share of jhakass special effects, like when Spidey stops a train using his (almost) bare arms. He could have just pulled the chain, but if you're the sort to make stupid observations like that you wouldn't be here, tensing up on the edge of your seat as the locomotive screeched precariously to a halt.

Where the first movie was fueled by the sheer high of a geek who suddenly discovers he can kick ass, its sequel is more introspective. But despite the philosophy, there's never a dull moment. Well, not too many anyway. Only a bit of a lull midway through the story, when you're left wondering exactly where it's all going. But not to worry, all the cornball high-voltage action comes gushing right back. Babies are rescued from burning buildings, old frail women get to sock the bad guy, girl loves boy back and the masked menace reveals his human side ('If you punch me, do I not bleed?').

Spiderman 2 does what very few sequels even aspire to do; it keeps the original formula - and magic - intact. Except for that somewhat disturbing aspect of the mask coming off repeatedly, it adheres fantastically to type. And when you've got a recipe like this one, everyone's up for a second helping.

See Spiderman 2 full details
SPIDERMAN 2 USER REVIEWS
1 - 3 OF 3 COMMENTS
POSITIVE  |  NEGATIVE |  NEWEST  |  OLDEST  |  MOST HELPFUL  |  LEAST HELPFUL
USER RATING
8.4
39 USERS
Performances
Script
Music/Soundtrack
Visuals
NA
NA
NA
NA
Can watch again - NA
Good for kids - NA
Good for dates - NA
Wait for OTT - NA
Rahul on 3rd Aug 2004, 10:00am | Permalink
This is what a FALL movie is all about... unfortunately it gets released in summer time. Thats allright... we forgive the director for backing that up with excellent SCRIPT and SCREENPLAY, which most of the desi directors are alien towards....

Catch this one on the silver screen! This one is a GEM for all ages.

ADVERTISEMENT
This page was tagged for
Spiderman 2 english movie
Spiderman 2 reviews
release date
Tobey Maguire, Kirsten Dunst
theatres list
Follow @fullhyderabad
Follow fullhyd.com on
About Hyderabad
The Hyderabad Community
Improve fullhyd.com
More
Our Other Local Guides
Our other sites
© Copyright 1999-2009 LRR Technologies (Hyderabad), Pvt Ltd. All rights reserved. fullhyd, fullhyderabad, Welcome To The Neighbourhood are trademarks of LRR Technologies (Hyderabad) Pvt Ltd. The textual, graphic, audio and audiovisual material in this site is protected by copyright law. You may not copy, distribute, or use this material except as necessary for your personal, non-commercial use. Any trademarks are the properties of their respective owners. More on Hyderabad, India. Jobs in Hyderabad.