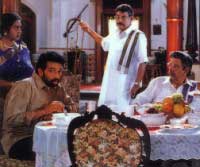 EDITOR RATING
5.0
Performances
Script
Music/Soundtrack
Visuals
NA
NA
NA
NA
Suggestions
Can watch again
NA
Good for kids
NA
Good for dates
NA
Wait for OTT
NA
A good sign for the film industry is that low-budget films, which were almost phased out with the onslaught of mega-budget entertainers, have been doing well in recent times. Maa Pelliki Randi, though not exactly a low-budget film, joins the list.

The film is a tale of a guy and a girl who meet by accident and fall in love. It has a lot of wit and humor, though most of it is borrowed from other films. Kumar (Chakravarti), a city bumpkin who is adept at the only art he knows best - sponging on his father's money - romps around the village and the neighbouring ones with his chela Rambabu (Sudhakar), without any definite direction.

On one of his aimless rounds, he goes to a nearby fair where he meets Anjali (Sakshi Sivanand), and there is love at first sight. Anjali also likes him but keeps dodging him before she finally gives into his pesterings. They don't even start coochie-cooing (except dreaming of the choreographed song and dance numbers) when Kumar's father arranges his marriage with his friend's daughter.

With the active co-operation of his friends - Brahmanandam and Sudhakar - Kumar creates a ruckus and makes the marriage plans go haywire. And it is tragedy time since she is the same girl that Kumar is in love with. How he changes for good and how he convinces his father-in-law and gets married forms the remaining part of the story.

The film's biggest asset is its comedy. Nagesh, AVS, Brahmanandam, Gowtam Raju and Sudhakar take care of that aspect. Despite this, there is not much of originality. Sudhakar with his trademark nasal accent is the same old self. Brahmanandam too is likewise, and so are the others.

But the biggest disappointment is Chakravarti, who wears a disdainful look. A shockingly half-hearted performance from a man whose career is on a downward slide! Sakshi Sivanand is pretty and her looks are all the more bolstered by the costumes. The music is so-so. Even with all these drawbacks the movie is worth a watch for the laughs, if not for anything else.

ADVERTISEMENT
This page was tagged for
Maa Pelliki Randi telugu movie
Maa Pelliki Randi reviews
release date
J D Chakravarthy, Sakshi Sivanand
theatres list
Follow @fullhyderabad
Follow fullhyd.com on
About Hyderabad
The Hyderabad Community
Improve fullhyd.com
More
Our Other Local Guides
Our other sites
© Copyright 1999-2009 LRR Technologies (Hyderabad), Pvt Ltd. All rights reserved. fullhyd, fullhyderabad, Welcome To The Neighbourhood are trademarks of LRR Technologies (Hyderabad) Pvt Ltd. The textual, graphic, audio and audiovisual material in this site is protected by copyright law. You may not copy, distribute, or use this material except as necessary for your personal, non-commercial use. Any trademarks are the properties of their respective owners. More on Hyderabad, India. Jobs in Hyderabad.