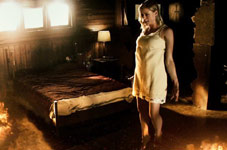 Josh / fullhyd.com
EDITOR RATING
5.0
Performances
Script
Music/Soundtrack
Visuals
7.0
4.0
6.0
7.0
Suggestions
Can watch again
No
Good for kids
No
Good for dates
Yes
Wait to rent it
No
The world is in danger. The Devil is trying to claim heaven and earth from the Lord. If he succeeds, apocalypse is certain. The Devil sends his demons to possess human beings and take control over their bodies and lives. That there appears to be a genuine apocalyptic threat is established with the possession of a girl in America who is showing telekinetic powers to influence inmates of her asylum to kill each other. This may be Satan himself possessing the girl. The world needs to be saved. And only the priests in Vatican can do that.
Yawn... We liked The Avengers better.
First, the plot. Angela Holmes (Olivia Taylor Dudley) is a 27-year-old who lives a pretty okay life. She's is in a happy live-in relationship with her boyfriend (John Amedori), and her loving religious father (Dougray Scott) too lives with them. Then a black raven begins to appear, and blood begins to spill.
The ex-military local priest Father Lozano (Michael Pena) begins to notice the changes in Angela and decides to keep an eye on her after she is sent to the asylum for psychiatric help. After some violence in the asylum, the psychiatrist (Kathleen Robertson) gives up and sends Angela back home. Meanwhile Father Lozano intimates Vatican priests (Peter Andersson and Djimon Hounsou) of these happenings, and one of them flies down to America to exorcise the girl.
The director of The Vatican Tapes (Mark Neveldine) is less interested in the garden variety horror movie shocks and thrills as compared to a creating a sense of dread and anxiety throughout. And while he succeeds, the genre fans may not appreciate the lack of actual horror. You won't find yourself jolting out of your seat in fear at any stage. Your stomach might turn at some of the violence, but there's nothing that'll scare the bejesus out of you.
Not helping matters is the laughable premise. There is some cleverness in the plot in terms of showing Satan's ability to imitate. For instance, Angela goes into coma for forty days. If you'll recollect, Jesus spent forty days in isolation in a desert before he comes to be taken as the Messiah. Angela claims to hear things (Satan's speaking to her) in her coma. Jesus is tempted by Satan in his forty days of prayer and fasting. But all this cleverness can be acknowledged only after first affirming that the plot is outright ridiculous.
The performances are good. Dudley plays up the dread with superb effect. She almost effortlessly switches between the weak and limp Angela to the powerful and manic demon. The rest of the cast also put in convincing acts and make you forget the farcical nature of the events in the film. In particular, it is amusing to watch Michael Peña play a straight-faced and sorted-out diocese days after watching him as the hilarious bumbling ex-convict Luis in Antman. He pulls it off very convincingly, though.
The music is often pulsating, but mostly does its job on creating the required atmosphere. The visuals too have a similar function. A sizeable chunk of the film plays out on CCTV cameras and mobile cameras. From the trailer you'd think this is a found-footage movie (the original script was in that format). But the footage doesn't add much to the film except show up as videos in the Vatican archives. The visuals don't register as anything particularly exciting, though the close-ups of the possessed Angela make an impact.

En fin, like we said, we liked The Avengers better. The format is the same - super-villains try to claim the world and superheroes are required to stop them. Except, in this movie the focus is on the super-villain. Though, if the Anti-Christ is going to turn up as the pretty Olivia Taylor Dudley, we're not sure how many will complain.
Share. Save. Connect.
Tweet
THE VATICAN TAPES SNAPSHOT 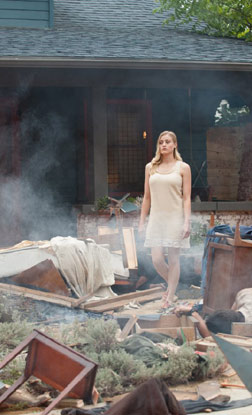 ADVERTISEMENT
This page was tagged for
The Vatican Tapes english movie
The Vatican Tapes reviews
release date
Michael Pena, Djimon Hounsou
theatres list
Follow @fullhyderabad
Follow fullhyd.com on
About Hyderabad
The Hyderabad Community
Improve fullhyd.com
More
Our Other Local Guides
Our other sites
© Copyright 1999-2009 LRR Technologies (Hyderabad), Pvt Ltd. All rights reserved. fullhyd, fullhyderabad, Welcome To The Neighbourhood are trademarks of LRR Technologies (Hyderabad) Pvt Ltd. The textual, graphic, audio and audiovisual material in this site is protected by copyright law. You may not copy, distribute, or use this material except as necessary for your personal, non-commercial use. Any trademarks are the properties of their respective owners. More on Hyderabad, India. Jobs in Hyderabad.