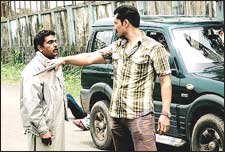 Samrat Sharma / fullhyd.com
EDITOR RATING
5.0
Performances
Script
Music/Soundtrack
Visuals
NA
NA
NA
NA
Suggestions
Can watch again
NA
Good for kids
NA
Good for dates
NA
Wait to rent it
NA
Have you ever been to some of those video games websites and read reviews for games? What they do is, they break the whole experience of having played the game into its constituent parts (Gameplay, Sound, Graphics etc.) and score each of them separately. I wish I could make a similar itemized list of the ingredients of filmmaking, and give a flat zero to Risk in screenplay, direction, background score and editing, and be done with it.

Alas, my editor wants me to write a 500-word review, and you shall have to read that instead. I'm going to write it, but I must warn you - I'm tired and not just because Risk is an exhausting film. It is, but I'm even more tired of these faux real, gritty Mumbai underworld dramas. Ram Gopal Verma set the bar with Satya, and almost everyone, especially his protégés, one of whom is Vishram Sawant, is simply content with using that as template and never going beyond.

As the film begins, you are introduced to an expository voiceover that explains the characters and what they do. Over little-heard dialog, the exposition reaches ridiculous proportions where it is just naming characters for the sake of it. "Yeh Hari Hai." "Yeh Anwar ki biwi hai. Do bachche bhi hain." Achha? Mujhe to maloom hi nahee tha. This is important, though, because it introduces you to the level of writing you will be seeing in this film. Very, very low.

Anyway, we then plunge into the story of an honest, not-so-upright cop, Suryakant (Hooda), who wants to eradicate organized crime from Mumbai, and his unorthodox way of dealing with them. He is an encounter specialist, you see, and has no qualms about killing gangsters to get the job done. By this time I was already seeing huge shades of Ab Tak Chhappan.

We are then introduced to a polite-yet-menacing don, Khalid (Khanna), who reigns over the nefarious ongoings from Bangkok, complete with a hot-headed brother and an autistic child. Angaar, anyone?

Khalid is at loggerheads with Naidu (Hussain), who is moving into his turf, and relies on the Chief Minister (Biswas) to get him removed. When the Home Minister (Jog) sides with Naidu, battle lines are drawn, and a game of cat-and-mouse with ever-changing loyalties begins. Suryakant decides to take matters in his own hands, and slowly reaches a position to play both sides against each other, to ensure complete and utter destruction of both factions.

This Yojimbo-like premise was so promising, in fact, that I was riveted to the screen. The film was finally beginning to pick up (all this happens largely in the second half), but except for a few deft moments of changing colors, it never really delivers on a livewire of an idea. Pity, because the film had tremendous potential. Hooda and Khanna deliver solid performances and their verbal ping-pong is fascinating to watch.

Hooda especially has the right swagger and sheer physicality of the role down pat, and Khanna shows that even in a limited and underwritten role, he can deliver a crackerjack of a performance. The supporting cast, too, does its job admirably, given the all too familiar visual language of the film.

Where it hurts most, though, is the writing. The screenplay is plain boring, the characters are criminally neglected, and the dialog varies from Satya-like familiarity to just plain bizarre.

Vishram Sawant has a certain flair for using staccato sequences of violence and physical brutality to set the mood and move his narrative, but has no control over his actors, and the emotional moments. What sets the better gangland dramas apart - Omkara comes to mind - is the emotional impact associated with the violence. Eschewing that makes Sawant's effort look mawkish.

The screenplay doesn't even stop to help you make sense of things - things just happen. From fairly plausible, the film treads into nonsense territory, and some very brave performances from the leads stop it from staying there. While I applaud low-budget enterprises, I cannot stand by a film that has no screenplay to talk of and looks like it has been edited together with scotch tape.

It's obvious that Vishram Sawant is talented, and I don't mean to say that in jest. There is a certain conviction of showing a vision, even if the end product is strangely disjointed and shopworn. The problem is that he is working within the boundaries a film. Which means he needs to tell a story and populate it with real characters, both of which are his weak points. He needs to do some experimental work that removes the need for a coherent narrative or character development.

The film is well shot and decently acted (with the terrible exception of Dutta, who is a confused mumbling bore), and if you can stand yet another Maratha gangland film, replete with quasi gun-toting jingoism and serious pondering men, do give this one a chance. Don't expect it to be brilliant, and, oh, wear ear muffs. The background score is harsh and LOUD.
Share. Save. Connect.
Tweet
RISK SNAPSHOT

See Risk full details
RISK USER REVIEWS
1 - 1 OF 1 COMMENTS
POSITIVE  |  NEGATIVE |  NEWEST  |  OLDEST  |  MOST HELPFUL  |  LEAST HELPFUL
USER RATING
5.6
10 USERS
Performances
Script
Music/Soundtrack
Visuals
NA
NA
NA
NA
Can watch again - NA
Good for kids - NA
Good for dates - NA
Wait to rent it - NA
Anand Raj To Aaamchi_HYD on 20th Jan 2007, 5:47pm | Permalink
Hello Aamchi_Hyd...the thing is that am presently writing a movie script(a Hindi movie but am presently writing the script in English) and i would like to have you as my working partner...my gut feeling is that you have it in u to become a screenwriter if u give it a chance....i finished 70% of the script already but i definitely need the help of a guy like u to finish the rest of the script or any draft thereafter...and one more thing, i also got the producer...so if u r interested, please contact me at my e-mail st_assisi@yahoo.com or drop a offliner at my yahoo messenger ID 'st_assisi' to work things out...am dead serious and dont even think that it's some kind of prank.....am really really serious about this script...hope u respond.....

ADVERTISEMENT
This page was tagged for
risk randeep hooda full movie
Risk hindi movie
Risk reviews
release date
Vinod Khanna, Randeep Hooda
Follow @fullhyderabad
Follow fullhyd.com on
About Hyderabad
The Hyderabad Community
Improve fullhyd.com
More
Our Other Local Guides
Our other sites
© Copyright 1999-2009 LRR Technologies (Hyderabad), Pvt Ltd. All rights reserved. fullhyd, fullhyderabad, Welcome To The Neighbourhood are trademarks of LRR Technologies (Hyderabad) Pvt Ltd. The textual, graphic, audio and audiovisual material in this site is protected by copyright law. You may not copy, distribute, or use this material except as necessary for your personal, non-commercial use. Any trademarks are the properties of their respective owners. More on Hyderabad, India. Jobs in Hyderabad.