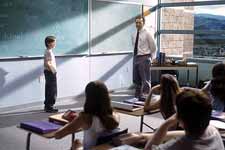 Chinmayi Sirsi / fullhyd.com
EDITOR RATING
7.0
Performances
Script
Music/Soundtrack
Visuals
NA
NA
NA
NA
Suggestions
Can watch again
NA
Good for kids
NA
Good for dates
NA
Wait to rent it
NA
It isn't a very good idea to dream small dreams in Hollywood. But if you are the kind of director that knows that small is the way a lot of things turn out, and that the world can be as disappointing as it can be beautiful and as painful as it can be joyous, then you get stuck between big and small in a big way and can't quite decide which way your movie should go. And audiences do not like their directors standing on shaky ground.

The secret of all good movies is that they believe in themselves (remember Forrest Gump?). Pay It Forward seems to oscillate wildly between naïve belief and cynical disbelief in its own central idea, and that is definitely not a recipe for good filmmaking.

Trevor McKinney (Haley Joel Osment) is an eleven year old with a face that holds secrets, an alcoholic mother Arlene McKinney (Helen Hunt) and an absentee father. Eugene Simonet (Kevin Spacy), Trevor's seventh grade teacher, gives his class an assignment: "Think of an idea that can change our world and put it into action". Trevor, we later realize, is a kid who takes his assignments very seriously indeed.

He comes up with an idea that requires one person to help three others in a big way, and those three to help yet three others, hence paying it forward. To start with, he hands over all his savings to a homeless man, brings him over to dinner and scares the daylights out of his mother, who goes to see Simonet. Next he decides to do some matchmaking, trying to bring his desperate mother and scarred teacher together.

Unknown to Trevor, his idea starts a movement, with perfect strangers helping perfect strangers out. But the world is not so perfect after all, and this Trevor realizes when his alcoholic dad (Jon Bon Jovi in a surprisingly brief and insignificant role) returns and Arlene decides to give him another chance. This leads to the unraveling of the mystery behind Simonet's burns (thankfully, 'coz you are beginning to wonder if you'll ever know!).

Far away, Chris Chandler (Jay Mohr), a reporter in search of a story, is in the process of discovering the Pay It Forward movement, which has strangers being mysteriously generous and kind. He manages to find Trevor with what seems to be suspicious ease to me, and puts him on national TV. But it is the way the movie ends that makes you want to shake some sense into the director.

With brilliant performances by two Oscar winners and one nominee, Pay It Forward is one of those "could have beens" with such potential that it can break any serious moviegoer's heart. Instead of telling a good story well, the director attempts (and worse, fails at the attempt) to convey messages of generosity and goodness, to inspire audiences and to play the good angel.

The romance between an alcoholic waitress and a scarred schoolteacher intensely in love with words is so unlikely, it borders on implausible. It does not help that their entire relationship is based on their weaknesses instead of their strengths. Pay It Forward ends up being one of those tearjerkers that don't move you much if you are a seasoned cynic like yours truly.

The performances nullify some of the worst parts of the movie, and all three stars of the rating are dedicated to the actors. But that does not change the fact that this is yet another good idea gone bad, yet another promise broken. Well, disappointments are a part of the game, aren't they?
Share. Save. Connect.
Tweet
PAY IT FORWARD SNAPSHOT

ADVERTISEMENT
This page was tagged for
Pay It Forward english movie
Pay It Forward reviews
release date
Keven Spacey, Helen Hunt
theatres list
Follow @fullhyderabad
Follow fullhyd.com on
About Hyderabad
The Hyderabad Community
Improve fullhyd.com
More
Our Other Local Guides
Our other sites
© Copyright 1999-2009 LRR Technologies (Hyderabad), Pvt Ltd. All rights reserved. fullhyd, fullhyderabad, Welcome To The Neighbourhood are trademarks of LRR Technologies (Hyderabad) Pvt Ltd. The textual, graphic, audio and audiovisual material in this site is protected by copyright law. You may not copy, distribute, or use this material except as necessary for your personal, non-commercial use. Any trademarks are the properties of their respective owners. More on Hyderabad, India. Jobs in Hyderabad.