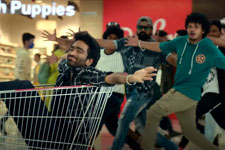 Bhargav Shastry / fullhyd.com
EDITOR RATING
5.0
Performances
Script
Music/Soundtrack
Visuals
NA
NA
NA
NA
Suggestions
Can watch again
NA
Good for kids
NA
Good for dates
NA
Wait to rent it
NA
Looking at it as an optimist, this film seems to be mocking at all the major clichés Tollywood seems to be churning out these days. But factually, this film is just a pathetic continuation of those clichés. A clichéd title, a hackneyed plot, songs with the titles of recent blockbusters as their lyrics... how demented could these filmmakers get? The only redeeming factor for the film is that it has been made on such a small budget that it will probably recover its cost even through one day's screenings.

So what do we have here? Four good-for-nothing, idle young men, with Samba (Shivaji) leading the brat pack. They do all the stuff that such youth represent - loitering around in their 'sepot', eve-teasing, watching blue films, guzzling tons of beer etc. Such people, as usual, are glorified by our director.

Samba fantasizes about a television anchor Madhu (Manya), and falls in love with her. To show the positive effects of such love, we see our hero burning his Debonair magazine and reading 'Discovery Of India' instead for her. This infatuation also results in a couple of loud songs. When he happens to meet her in person, they become friends as they share the same feelings about India's future. He also undertakes a scheme a la janmabhoomi to impress her.

The rest of the film is about how he wins his love amidst some mindless melodrama and his 'enlightenment'. Some inane comedy, jarring screenplay and unconvincing performances add to the rut of the film. If you bitten by the Tholi Prema, Nuvve Kaavaali and Chirunavvuto bug and just want a similar theme, you'll be satisfied. But if you also want a similar presentation, it's like wanting to have the cake and eat it too.
Share. Save. Connect.
Tweet
LOVE SNAPSHOT

ADVERTISEMENT
This page was tagged for
Love telugu movie
Love reviews
release date
Shivaji, Manya
theatres list
Follow @fullhyderabad
Follow fullhyd.com on
About Hyderabad
The Hyderabad Community
Improve fullhyd.com
More
Our Other Local Guides
Our other sites
© Copyright 1999-2009 LRR Technologies (Hyderabad), Pvt Ltd. All rights reserved. fullhyd, fullhyderabad, Welcome To The Neighbourhood are trademarks of LRR Technologies (Hyderabad) Pvt Ltd. The textual, graphic, audio and audiovisual material in this site is protected by copyright law. You may not copy, distribute, or use this material except as necessary for your personal, non-commercial use. Any trademarks are the properties of their respective owners. More on Hyderabad, India. Jobs in Hyderabad.