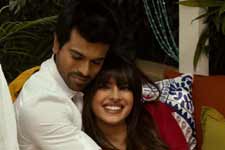 Ravi Kandala / fullhyd.com
EDITOR RATING
3.0
Performances
Script
Music/Soundtrack
Visuals
3.0
3.0
3.0
3.0
Suggestions
Can watch again
No
Good for kids
No
Good for dates
No
Wait for OTT
No
Firstly, the Raghupati Raghava Raja Ram song needs to be copyrighted. It is a bhajan that asks for sanmati to everyone. While Satyagraha at least made a decent attempt to use it in the context of a movement to weed out corruption, Thoofan actually uses it as a background to the hero's introduction fight. Ram Charan, playing ACP Vijay Khanna, bashes up a state minister and his goons in the middle of the road to stop them from continuing their rasta roko to a deafening instrumental version of Raghupati Raghava Raja Ram, and is constantly seen walking up the corridors of the police station to the same song.

Why? What does the song signify? Is he being made out to be the embodiment of Ram? Is it because Amar Mohile gave Apoorva Lakhia the wrong CD? We guess we will never find the answer to that one.

Thoofan, the Telugu version of Ram Charan's debut Hindi feature, Zanjeer, is a sad remake of the original. The original was never a superb film, but it benefited to no end due to Amitabh Bachchan's silences (the famous silences that made him the "Angry Young Man") and due to Pran's impeccable portrayal of a lovable Pathan who plays a foe turned friend. The new version reduces both these characters to caricatures, and destroys the emotional core of the original.

The movie is about Vijay Khanna's fight against the oil mafia in Mumbai. The mafia, as can happen only in movies, is led by one man and one man only, Teja (Prakash Raj). Teja alternates between playing a fool with his moll, Mona (Mahie Gill), and a tough guy dealing with the cops.

Vijay also has some childhood trauma due to an incident in which both his parents are stabbed in front of his eyes, and keeps having recurring dreams about the killer, who has a stallion tattooed on his wrist.

Into this extremely routine story of good cop + revenge, we have two more extremely routine sub plots - one in which a witness (Mala, an NRI played by Priyanka Chopra) protected by our hero falls in love with him, and another one with a golden-hearted criminal, Sher Khan (played by a listless Srihari).

The movie does a terrible job of alternating among these three plots. We wait for the end in a breathless manner, not because we are enamoured, but because we are bored out of our skulls and want to go home and see the original Zanjeer to atone for our sins

Thoofan is terribly inconsistent in its tone and tenor. The director sets up several big ticket sequences, but does not use them to any end. There are two huge crowd sequences - one during Ganesh Nimarjan, and the other during a Moharram procession. Both are used only as montage shots, from which we cut away to action happening elsewhere. In another example, Priyanka Chopra is shown to be staying in the Park Hotel in Mumbai, but all the external shots are those of the Park Hotel Hyderabad.

And Ram Charan, who plays the tough cop in one scene, turns terribly romantic with Priyanka Chopra in the next. His performance is heavily influenced by his masala movie school of thought, and he ends up playing a show-offish cop as against the silent and sincere cop he is supposed to portray.

Prakash Raj, who plays a tough gangster, wears bathrobes through a majority of the film, and garishly printed suits when he is not wearing bathrobes.

Mahie Gill, who destroys the legacy of Mona Darling, shows skin, and talks about getting some action all the time. Priyanka Chopra plays a talkative NRI, the kind that will gladly be strangled by NRIs for portraying their ilk in such bad light.

Srihari screams his lungs out, and is totally out of his depth. The supporting actors are unfamiliar faces to Tollywood, and fail to generate the desired comic effect.

The technical values are decent, with the film being glossily shot. The music is the loo-break variety, and the placement of songs is incredibly bad. Imagine the super-serious cop bursting into the "Hum hain Mumbai ke hero" song when he is being suspended and is sitting at home.

The opening titles have a semi-clad woman (James Bond influence?) dancing away to glory in the backdrop of a hooded man with a knife (the hero's recurring dream through the movie) and drenched in oil (giving us a broad hint that the movie is about the oil mafia). We are sure the director got a pat on his back for this creative visualization (that we felt like thwacking him on the back is another matter altogether).

Overall, Thoofan is a wasted effort. Ram Charan has done better in several (or all) of his Telugu films. His debut in Hindi sure required some buzz around it, but starring in a remake of an iconic film was a wrong choice.
Share. Save. Connect.
Tweet
THOOFAN SNAPSHOT 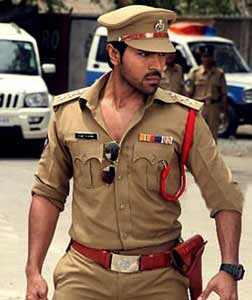 ADVERTISEMENT
This page was tagged for
Thoofan telugu movie
Thoofan reviews
release date
Ram Charan, Priyanka Chopra
theatres list
Follow @fullhyderabad
Follow fullhyd.com on
About Hyderabad
The Hyderabad Community
Improve fullhyd.com
More
Our Other Local Guides
Our other sites
© Copyright 1999-2009 LRR Technologies (Hyderabad), Pvt Ltd. All rights reserved. fullhyd, fullhyderabad, Welcome To The Neighbourhood are trademarks of LRR Technologies (Hyderabad) Pvt Ltd. The textual, graphic, audio and audiovisual material in this site is protected by copyright law. You may not copy, distribute, or use this material except as necessary for your personal, non-commercial use. Any trademarks are the properties of their respective owners. More on Hyderabad, India. Jobs in Hyderabad.