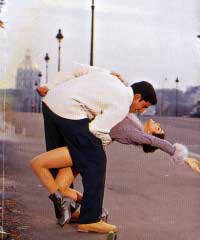 Feroz Hassan / fullhyd.com
EDITOR RATING
5.0
Performances
Script
Music/Soundtrack
Visuals
NA
NA
NA
NA
Suggestions
Can watch again
NA
Good for kids
NA
Good for dates
NA
Wait to rent it
NA
Have you ever witnessed a school play? For all its flaws, you can't help sympathize with the players and actually have words of appreciation for them. Except for the last part, this is very much true of TJCG. It really does appear like an amateurish play, put together to amuse one's friends and family. This is more so when you consider that there has been an all-out effort to replicate Amitabh Bachchan in Abhishek.

Caricatures and simpletons make up the characters in yet another 'love story' that, for all its loud claims, is far from magical. Pooja (Kirti Reddy) works for an ad agency where bad hair days are the norm rather than exceptions. You have characters like Pooja's boss (Kader Khan) and her associate Maggy (Johnny Lever) who seem to be desperately trying to land a shampoo ad by growing their hair long enough for them to be mistaken as behenjis. This is not to mention some other grotesque dudes whose hair suggests that they still haven't gotten over Vikram-and-Betaal stories.

Back to the story, Pooja lands in Agra to attend a friend's wedding, where a photographer, Kabir (Abhishek), starts fancying her. A song and a fight later, the guy indisputably asserts that he is "the" Agre ka chokra. So what next, you ask. What else, but celebrate the fact with another three songs! But by the time the chokra decides to confess it all to Pooja, she is back in Mumbai.

Back home, Pooja, due to her history of late-coming, is sacked for overreaching her leave. Maggy saves the day by saying that she was delayed on account of her engagement to Kabir. How can our homely bosses be unaffected by the event? So Pooja is back in her seat, and dreams about her dream guy Raj (Sanjay Suri), the boss' son.

Her dreams are rudely interrupted by the arrival of Kabir in the city (so the guy found out that there is life outside of Agra). Another elaborate game is played, this time with the help of a wrecked Kabir, to break off the fake engagement. Here a superfluous angle is added, as Kabir's singing talents are spotted and he becomes a major star - they always do, don't they?

But, will he get the girl? Do you still need to know? Well then, watch the film for an answer that won't stir you one bit.

Abhishek and Kirti look like two kids too excited about what they are doing - as in most school plays - to think about their roles. Abhishek is further shoved into the shadows of his father, and unless he decides to do something about it, he will remain there - a poor replica of a legend.

With a good enough voice and a fairly expressive visage, all that the guy needs are a few acting lessons and some confidence. I can't recall a single instance where he looks straight into the camera, not even in a close-up. Kirti Reddy slips into skimpy costumes, once she is out of the mahaul of Agra. Her looks warrant notice, though. One wishes that it were also true of her histrionics, which are just about average.

But the real culprit is the screenplay, which leaves a few things too late, and as a consequence, hurries them later. This makes for a restless audience, who can't wait for the movie to end.

The movie is worth your while, if you just wanna check out the lead pair. One of them for his nostalgic appeal - Abhi is going to hate the fact - and the other for her fresh looks.
Share. Save. Connect.
Tweet
TERA JADOO CHAL GAYA SNAPSHOT

ADVERTISEMENT
This page was tagged for
Tera Jadoo Chal Gaya hindi movie
Tera Jadoo Chal Gaya reviews
release date
Abhishek Bachchan, Kirti Reddy
theatres list
Follow @fullhyderabad
Follow fullhyd.com on
About Hyderabad
The Hyderabad Community
Improve fullhyd.com
More
Our Other Local Guides
Our other sites
© Copyright 1999-2009 LRR Technologies (Hyderabad), Pvt Ltd. All rights reserved. fullhyd, fullhyderabad, Welcome To The Neighbourhood are trademarks of LRR Technologies (Hyderabad) Pvt Ltd. The textual, graphic, audio and audiovisual material in this site is protected by copyright law. You may not copy, distribute, or use this material except as necessary for your personal, non-commercial use. Any trademarks are the properties of their respective owners. More on Hyderabad, India. Jobs in Hyderabad.