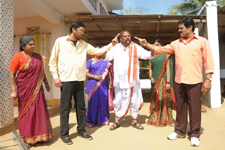 Kritika Deval / fullhyd.com
EDITOR RATING
4.0
Performances
Script
Music/Soundtrack
Visuals
5.0
6.0
5.0
4.0
Suggestions
Can watch again
No
Good for kids
No
Good for dates
No
Wait to rent it
No
When I was a little girl, my grandmother would tell me stories, stories I would listen to for hours together as if entranced. Tales from the Mahabharata, the Ramayana, and Vikram and Betala, of great adventure, courage, and larger-than-life heroes fighting for a just cause. However, the inquisitive little brat that I was, it wouldn't end there. I would pester her with endless questions about the illogicalities that were extremely apparent to me. "Nee prashanalaku samadhanam ivvatamu naa valla kade. Idi inthe. Cheppindi vini noru muyyi. (I don't have the patience to deal with your questions. This is how things are. Listen to what I say and keep quiet)," she'd thunder at me.

Now you might ask me why I went off on such a tangent. Here's why. People's War is a movie about brave people doing brave things for a just cause. However, it has the exact same stubbornly, vociferously indignant attitude about its cause that the elderly have when you ask them for explanations.

The story begins with an entirely unnecessary sequence of faith, betrayal and rescue that was orchestrated only to introduce three of the pivotal characters - Chinna Rao (Posani Murali), the wily, sleazy, opportunist; Kondavalasa, a weak drunkard who'd sell his own daughter for a bottle of brandy (which he almost does); and our loquaciously noble hero, Joga Rao (Srihari), who saves the said daughter from dishonour by bestowing upon her the honour of matrimony with his hallowed self which she accepts in an embarrassingly grateful manner.

In the drama that ensues, you also meet the film's creator R Narayana Murthy as Simhadri Naidu, the just but ineffective MLA who also happens to be the father of noble Joga Rao and evil Chinna Rao (yes, the two are brothers), and Telangana Sakuntala as Simhadri Naidu's persnickety mother.

They all live in the beautiful wetlands of Someswarapeta in the Srikakulam district of coastal Andhra. However, trouble starts when the government decides to build a thermal power plant there despite the obvious dangers to the environment, and to the livelihoods and the lives of the people.

Joga Rao recruits the good people of Someswarapeta to conduct dharnas and other protests, even as Chinna Rao ends up as the government's tedhi ungli into the village, and an unintentionally entertaining one at that, as he goes around using all possible heinous methods to cajole and coerce land from the people for the government with the help of none other than Joga Rao's drunkard of a father-in-law.

The rest of the movie is all about the people's protests, the government's exploitation, and Joga Rao's eloquent speeches that convince not a whit.

And that is the major flaw of the movie. Joga Rao's rails and rants and impassioned speeches utterly fail to move you because they base themselves on the illogicalities of sentiment and fealty, when calm reason would have served much better.

The stronger points of the movie, like its cause; the vast amount of information it provides; the attention to detail in terms of the accent, the local art forms, the use of street plays and dances to spread awareness amongst the people; and much more, get lost in the loudness of it all. And we mean that quite literally. (We kept our fingers stuck in our ears for the whole movie and could still hear everything with crystal clarity.) There wasn't a single utterance in the entire film that wasn't spoken at the top of the, well, utterer's lungs.

Based on the struggle that took place in Sompeta in 2010 over the installation of a thermal power plant there, People's War is a valiant attempt at informing the people of, and arousing them to, what is happening around them. However most of its meaning gets lost in translation - rather, amplification.
Share. Save. Connect.
Tweet
PEOPLE'S WAR SNAPSHOT 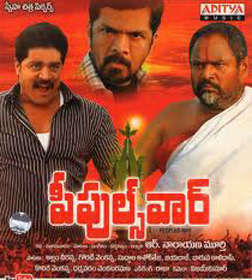 ADVERTISEMENT
This page was tagged for
people's war Telugu full movie
PEOPLE WAR TELUGU FULL MOVIE
peoples war telugu full movie 2012
People's War telugu movie
People's War reviews
Follow @fullhyderabad
Follow fullhyd.com on
About Hyderabad
The Hyderabad Community
Improve fullhyd.com
More
Our Other Local Guides
Our other sites
© Copyright 1999-2009 LRR Technologies (Hyderabad), Pvt Ltd. All rights reserved. fullhyd, fullhyderabad, Welcome To The Neighbourhood are trademarks of LRR Technologies (Hyderabad) Pvt Ltd. The textual, graphic, audio and audiovisual material in this site is protected by copyright law. You may not copy, distribute, or use this material except as necessary for your personal, non-commercial use. Any trademarks are the properties of their respective owners. More on Hyderabad, India. Jobs in Hyderabad.