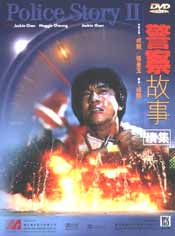 Chinmayi Sirsi / fullhyd.com
EDITOR RATING
5.0
Performances
Script
Music/Soundtrack
Visuals
NA
NA
NA
NA
Suggestions
Can watch again
NA
Good for kids
NA
Good for dates
NA
Wait to rent it
NA
Jackie Chan movies are like litchi ice creams - you either have a taste for them or you don't. And if you don't, Police Story 2 isn't a very nice experience. But if you happen to be a fan of the one and only Jackie Chan, you might enjoy this stunted tale (pun fully intended!).

Chan plays Kevin Chan, a cop with an attitude problem. His individuality and unconventional methods get him into trouble with his superiors, who can't decide whether he is more of an asset or a nuisance. Chan resigns when he disgraces the squad by beating up some guys who harass his girlfriend May, but is asked to return when the cops face a difficult case involving bombs and ransoms.

Chan's investigation lands him up in a warehouse reeking of dynamite. With 20 million dollars (Hong Kong dollars, but hey, that's money too!) on the line, not to mention his reputation, Chan pools in all his resources against the bad guys. But the bad guys aren't just bad, they are also clever. They kidnap May, and in a curious reversal of roles, Chan is forced to deliver the money to them. But he's Jackie Chan, so of course he wins in the end.

There's also a Mr Koo (who I assume is a spill-over from Police Story 1) who, with his sidekick, keeps popping in and out of the scene without much relevance. But when there's so much action, who cares for relevance?

Most of Chan's stunts come through during the fight sequences. There are quite a few "How does he do that!" stunts in the movie, even though he does not climb trees or ladders as in the Kung-Fu ones. The film is also mildly funny at times, but most of the humor is rather juvenile, without sharp quips or clever remarks. The dubbing from Chinese is done quite well, though.

This one is for Jackie Chan fans only. As I said, it all depends on your taste buds.
Share. Save. Connect.
Tweet
POLICE STORY 2 SNAPSHOT

ADVERTISEMENT
This page was tagged for
eng. muvie police story 2
police story 2
Police Story 2 english movie
Police Story 2 reviews
release date
Follow @fullhyderabad
Follow fullhyd.com on
About Hyderabad
The Hyderabad Community
Improve fullhyd.com
More
Our Other Local Guides
Our other sites
© Copyright 1999-2009 LRR Technologies (Hyderabad), Pvt Ltd. All rights reserved. fullhyd, fullhyderabad, Welcome To The Neighbourhood are trademarks of LRR Technologies (Hyderabad) Pvt Ltd. The textual, graphic, audio and audiovisual material in this site is protected by copyright law. You may not copy, distribute, or use this material except as necessary for your personal, non-commercial use. Any trademarks are the properties of their respective owners. More on Hyderabad, India. Jobs in Hyderabad.