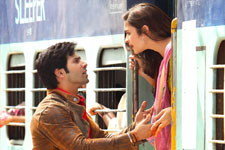 Nupur Barua / fullhyd.com
EDITOR RATING
7.0
Performances
Script
Music/Soundtrack
Visuals
7.0
6.0
5.0
6.0
Suggestions
Can watch again
Yes
Good for kids
Yes
Good for dates
Yes
Wait for OTT
No
In case the posters (with the lead actors posing against yellow mustard fields), promotional videos and the word "Dulhania" have not made it abundantly clear to you, let us break it gently - Humpty Sharma Ki Dulhania is an adaptation of the classic Dilwale Dulhania Le Jaayenge. There, now you know. What you do not know, however, is what to expect, and that is where the movie becomes interesting.

An adaptation is not necessarily a replica. So while you have the usual DDLJ suspects - carefree hero, spirited heroine, strict father, great friends, supportive sisters (all Punjabi) - the way they come together in this film by Shashank Khaitan is more contemporary, and less dramatic. In a nutshell, it is a love story without the screeching and the OTT acting. Well, almost.

When Rakesh Sharma (Varun Dhawan) was a young boy, he was really fat, and so he was nicknamed Humpty. Now he is a college student, who will not cheat during his final examination but will try to bribe the person assessing his paper. Which is how he meets Kavya Pratap Singh (Alia Bhatt), the niece of the person he tries to bribe.

Kavya, the motor mouth from Ambala, is in Delhi to buy a designer wedding outfit for herself. She is from a wealthy family in Ambala, and her main reason for not dragging her family into her wedding shopping is because her elder sister is a divorcee - Kavya does not want to upset her emotions.

In the meantime, Kavya's friend Gurpreet (Guncha Narula) is the victim of blackmail by her ex-boyfriend, and Gurpreet is about to get married to somebody else.

Humpty, by now quite taken in by the beer-guzzling Kavya, offers to help out by teaching Gurpreet's ex-boyfriend a lesson, and before they know what is happening, Kavya and Humpty are in love. Kavya, however, has to go back to Ambala and marry the boy that her father has chosen.

Humpty and his friends Shonty (Gaurav Pandey) and Poplu (Sahil Vaid) land up in Ambala, too, with the intention of winning over Kavya's father (Ashutosh Rana). Mr. Singh turns out to be an irascible, authoritarian father, and is not impressed with Humpty's sincerity. Humpty persists, and Mr. Singh then asks him to prove his worth.

Predictable to the hilt, Humpty Sharma Ki Dulhania and DDLJ have several plot points in common (with the former exhibiting contemporary takes of the original). But the point remains that for today's young generation, Humpty Sharma Ki Dulhania is more relevant. Unlike in the original, the director here does not spend too much time explaining every sequence of events that leads to a fresh sequence of events.

However, certain sequences could have been better explained - such as how Kavya's maternal uncle knew about Gurpreet, why Mr. Singh softens towards Humpty, why Mr. Singh made such a big deal out of the dhaba incident (since he believes in a little hooliganism himself), and why the women in the house like Humpty (given that he hardly interacts with them).

The last scene in the film is a little confusing, precisely because one of the above-mentioned explanations is missing. There is a baraat, of course, but where did it come from, and where does it go? In a refreshing change of convention, while Humpty is not exactly a wimp, it is Kavya who initiates most of the action.

The movie has humour, romance, violence, abuses, misunderstandings, tragedy, and everything else that is required to make it one big family entertainer - Karan Johar style. The first half is entertaining and spontaneous, but the second becomes convoluted, and drags a bit. Since you already know who is going to end up with whom, all the hurdles placed in their path seem forced. The sudden lack of intensity in the second half of the story is a dampener, and even the bright music videos cannot do much to uplift your mood. The comic relief therefore is welcome, although you cannot help cringing at the whole "gay" fiasco - Hindi movies have yet to learn how to treat homosexuality as a choice, and not an abnormality, or fodder for jokes.

Varun Dhawan is versatile - of that there is no doubt. The ease with which he exhibits, as Humpty, macho behaviour as well as vulnerability is commendable. The only problem is that he is a star already, and he knows it, so he is not entirely Humpty - you cannot forget that he is Varun Dhawan. However, this role suits him, and we believe that nobody else could have pulled it off. He is lovable and irritating, and his act will have you rooting for him.

Alia Bhatt, on the other hand, is a younger version of the self-obsessed Poo (Kareena Kapoor). She presses her lips together in a thin line once too often, and her smugness overshadows the bubbliness that her character has. She does go overboard with her histrionics in places, but she manages to be convincing. Again, like her co-star, she is not entirely Kavya, because she is too busy being a star.

The surprise elements in the movie are the two friends - Gaurav Pandey and Sahil Vaid. They are the spine of the film, and your eyes look for them even when they do not have much to do in a scene. Another impressive act is the one Asutosh Rana gives us - he is intimidating, but he also has a naughty side, and a heart.

Kenny Desai is brilliant, but you wish he had a larger role. Siddharth Shukla appears a little self-conscious in his effort to look the perfect man, but he is impressive, too.

The songs of the movie are already popular, but they are all set to Punjabi beats, and the soundtrack does not have much variety. Even the music videos are not very original. The camera work is decent, and the editing is a little jarring. Thankfully, the length of the film is just two hours.

Watch Humpty Sharma Ki Dulhania for the actors more than for the story. The lead actors may not make a mark, but the peripheral ones are sure to remain in your memory for a while. The movie itself is filled with fun, and there is hardly ever a dull moment. This is a romantic comedy, Indian style, and we may be getting closer to creating our own brand of the genre, despite the fact that this film is an adaptation.
Share. Save. Connect.
Tweet
HUMPTY SHARMA KI DULHANIA SNAPSHOT 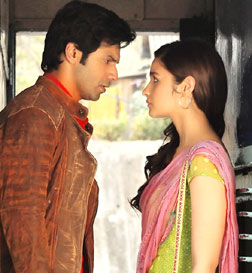