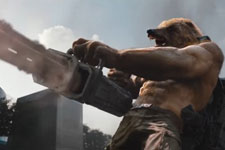 Swaroop Thotada / fullhyd.com
EDITOR RATING
2.0
Performances
Script
Music/Soundtrack
Visuals
3.0
1.0
3.0
4.0
Suggestions
Can watch again
No
Good for kids
No
Good for dates
No
Wait to rent it
Yes
After this film nearly destroyed my already feeble will to live and a relatively stronger enthusiasm to review films, I looked up the internet to find how on earth a film that was panned by Russian critics themselves made it to a different country as a dubbed release. As if there is a dearth of duds here for us to need Russia's help. Or perhaps this is Russia's challenge to our monopoly over dross? In which case we need to up our game, for they seem to have gotten a grip on it. (But we have Meher Ramesh here, so no worries.)

Sarik Andreasyan, the director of Guardians: The Superheroes, is one who marvels at Marvel superheroes and is well-versed in every comic book ever written. So are his heroes, it seems. But they don't seem to have much of a clue on when to switch to regular costumes. They make up for it in the much needed skill of mouthing platitudes, though. And whoever dubbed them to English took utmost care that the schmaltz is not lost in translation. In fact it is enhanced by the outright hilarious dubbing. Folks at Lakshmi Ganapathi films can rest in peace, for they have got a worthy successor here.

So we have a new super-villain here (no, we are not talking about the director) called August Kuratov (Stanislav Shirin) whose prosthetics will scare the living bejeezus out of any make-up artist. But that's not his only superpower. He can also chop into a million pieces, your love for films, with his acting chops. Apart from those outstanding powers, he can also control any machine in the vicinity. You might want to ask how, but trust us you shouldn't. For there is a real danger that he might actually tell you, and that will make this film a minute longer. So let us leave the life-risking stunts to the actors.

Kuratov follows the textbook and is aware that he should aspire for nothing less than world dominance. So SHIELD, sorry Patriot, assembles a team of superheroes who can compete with Kuratov's acting skills. But that is too much of an endeavor for a poorly-budgeted Russian film. So they settle for superheroes that can stop him.

The Fantastic Four or Avengers or X-Men of Russia comprise of Ler (Sebastien Sisak), a levitator of rocks; Ursus (Anton Pampushnyy), a bear-man; Khan (Sanzhar Madiev), a man faster than bullets; and Xenia (Alina Lanina), a woman who can be invisible in water. If they remind you of Magneto, Wolfman, The Hulk and The Invisible Woman, it means you are not asleep yet. Valeria Shirando plays the Patriot agent that assembles these titans. She might as well be named Nicky Fury.

Anyway, the stage is set for these daredevils to unleash their superpowers on the hapless audiences. And while they are at it, they manage to kill the bad guy as well, fortunately.

Guardians: The Superheroes looks like a film made as a demo by a startup visual effects company. For, all it can boast of is the sub-standard CGI. Sure, it is impressive that they pulled off those effects on that budget (as per IMDB, the budget is equivalent to 5 million US dollars), but that would be of interest only to the director's next employers and not to the audience. For there isn't a single scene, dialogue or shot in the film that shows a trace of imagination, originality or creativity. The cinematography is dull, the direction is incompetent, the acting is laughable, the music is hammy, and, as with all superhero films, the story is outright ridiculous.

At a time when there is already an oversaturation of superhero films in Hollywood, it is unclear what these mimics are trying to achieve. Of course, this film was made for Russians in an attempt to give them their own superheroes. The internet jokes about how the aliens always attack the USA are already yesteryear - maybe the Russians now want some super-villain to attack their own country. Well, it looks like they've achieved it - in the form of this film.
Share. Save. Connect.
Tweet
GUARDIANS THE SUPERHEROES SNAPSHOT 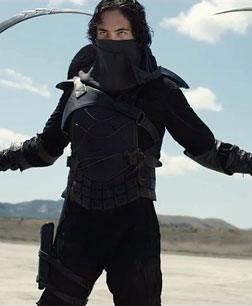 ADVERTISEMENT
This page was tagged for
guardians the superheroes full movie in telugu
guardians the superheroes movie full
Guardians The Superheroes english movie
Guardians The Superheroes reviews
release date
Follow @fullhyderabad
Follow fullhyd.com on
About Hyderabad
The Hyderabad Community
Improve fullhyd.com
More
Our Other Local Guides
Our other sites
© Copyright 1999-2009 LRR Technologies (Hyderabad), Pvt Ltd. All rights reserved. fullhyd, fullhyderabad, Welcome To The Neighbourhood are trademarks of LRR Technologies (Hyderabad) Pvt Ltd. The textual, graphic, audio and audiovisual material in this site is protected by copyright law. You may not copy, distribute, or use this material except as necessary for your personal, non-commercial use. Any trademarks are the properties of their respective owners. More on Hyderabad, India. Jobs in Hyderabad.