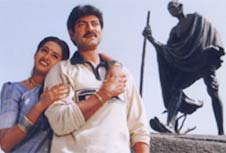 EDITOR RATING
7.0
Performances
Script
Music/Soundtrack
Visuals
NA
NA
NA
NA
Suggestions
Can watch again
NA
Good for kids
NA
Good for dates
NA
Wait to rent it
NA
With its pleasant title and pleasing promos, you would expect an equally pleasing love story to unfold amidst the ravishing picture post card locations of this film. But it is a rude shock to see the ISI moles scheming to destabilize India right in the opening shot, followed by their devastating bomb blasts in Coimbatore and Hyderabad.

I think it doesn't take much time for you to predict that our hero, Jagapati Babu, gets drawn into it. And how? Obviously, he can't be an ISI agent. And so, the only course possible is for him to be indicted. And through a case of mistaken identity - this time there is confusion regarding the number of the apartment - the hero is tried and sentenced to 14 years imprisonment. Of course, he comes out unscathed and exposes the nefarious ISI network. I don't need to tell you specifications of the plot.

But wait, we have to take our hats off to Gunashekhar for managing to make us stick to the seats till the end. The subplot, as is the main plot, resembles Roja, as Laya tries (a la Madhu in Roja) to evade her husband Jagapati Babu. Despite that, Gunashekhar's handling of the whole film was good.

For Jagapati Babu, it is a repeat performance of the role he did in Samudram (a disaster at the box-office), and that includes the stunt scenes in the jail. Laya, as the good wife, excels in her performance. And Prakash Raj, as the CBI officer, carries himself effortlessly. The film also boasts of good cinematography and some interesting situational songs (though not exactly melodious). All said and done, it is a worthwhile visit to the theatre.
Share. Save. Connect.
Tweet
MANOHARAM SNAPSHOT

ADVERTISEMENT
This page was tagged for
cvgFoRopCfMP5VgI1ATGCpg5O-1wjn5YtYx85mNeOMHAtlWZW60oMxvZFUR_eISqnsY1O4_CnJ2O3H2S6QYMx8Tj5LMqk0zj8iXHE0KPwy2QFLPhptYyIEhl_BCghcC_Kc4NUT_9dUleq2nx08HA6U4acjYpJy5UnWjaA0YlDwv4q7rkV3IQqHRyN3iwOulGq7KhOZ9RONDa-oM6Hq0KeHIiyQCTs_oHwp7Y_SoLaMw2vWiU9--gDB7Sc5bEb4RTFF-BSA7a1aztAxjhgRdoHTMmsXJ-pG_81Q6GCIlFpvyaYwLVGgrpqMkfRmTgp3urY8HgY5C49blQbggAO9ExWQ
manoharam movie Telugu
?????? ??????
manoharam in telugu review
manoharam telugu full movie
Follow @fullhyderabad
Follow fullhyd.com on
About Hyderabad
The Hyderabad Community
Improve fullhyd.com
More
Our Other Local Guides
Our other sites
© Copyright 1999-2009 LRR Technologies (Hyderabad), Pvt Ltd. All rights reserved. fullhyd, fullhyderabad, Welcome To The Neighbourhood are trademarks of LRR Technologies (Hyderabad) Pvt Ltd. The textual, graphic, audio and audiovisual material in this site is protected by copyright law. You may not copy, distribute, or use this material except as necessary for your personal, non-commercial use. Any trademarks are the properties of their respective owners. More on Hyderabad, India. Jobs in Hyderabad.