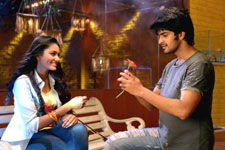 Kritika Deval / fullhyd.com
EDITOR RATING
3.0
Performances
Script
Music/Soundtrack
Visuals
4.0
3.0
5.5
4.0
Suggestions
Can watch again
No
Good for kids
No
Good for dates
No
Wait for OTT
No
As a story about a father and son who are into the same girl, Dikkulu Choodaku Ramayya is definitely out of the box, in that it makes you appreciate how much nicer it is inside. It makes you want to curl up in the box and really appreciate the machismo patterned wallpaper lining every crevice, and all the pretty but IQ-challenged women dressing the windows. It makes you want more "family" drama involving violence that gets most video games rated AO. It makes you believe that those in charge of the top-secret factory responsible for the "scripts" of our blockbusters only want what's best for us.

The problem isn't just that the father and the son fall for the same girl - it is also that the father, Gopala Krishna (Ajay), is a predatory lecher with a wife and two children, who is constantly hitting on women disturbingly younger than him. It is the fact that the 18-year-old son Madhu (Shaurya), who is also supposed to be a nice guy, is just as convinced that the girl in question, Sameetha (Sana Maqbool), is not much more than a collection of esthetically-pleasing body parts. It is also the fact that this movie is touted to be a comedy when what it really is, is a story to hit where it hurts the most - your already fragile faith in humanity.

Let's get on with the story so that all that starts making more sense. Dikkulu Choodaku Ramayya is the tale of the 38-year-old Gopala Krishna who feels so deprived due to his early marriage to an obliging and caring woman (Indraja) that he feels obligated to his 17-year-old self to hit on every 20-or-so-year-old he comes across. Let's get one thing out of the way. This is not a mid-life-crisis-hit man who is seeking love outside a staid marriage. This guy is the creepy uncle everybody in the family learns early to keep their children away from.

See, the way he meets our heroine, 21-year-old Sameetha, is when he sees her picture on her loan papers that he comes across at the bank he works for. He snatches up the opportunity to meet her under the pretext of collecting payments, goes to a money lender and borrows Rs. 20 lakhs to pay her loans, and then stalks the hell out of her for most of the first half.

Then you have the son, who is a socially-awkward college fresher who meets Sameetha accidentally on a lift, and spends the remaining minutes of screen-time available to him basically not showing what he likes about her besides how she looks.

Then, of course, comes the young, nubile Sameetha, whose idea of a annoying neighbor is a man who walks into her apartment to sexually harass her while she is alone. Ha, ha! How hilarious!

The rest of the story is about how the son teaches his father a lesson, with Sameetha basically there as a prop.

Don't get us wrong. The unrelenting misogyny is not all that is wrong with this film. After all, dialogue that constantly makes you groan, pacing that makes you want to snooze, and music that actually has you nodding off, have to count for something.

For a film that received such a wide release, Dikkulu Choodaku Ramayya looks surprisingly low-budget in a very Telugu soap opera way. The camera work is mediocre, while the editing department was definitely phoning it in. The music by Keeravani is disappointing, but we guess that just goes with the tone of the movie.

The performances by all of the leads are as uninspiring as the rest of the film, with Master Bharat stealing the show, something that he seems to be doing a lot lately. The rest of the cast is also mediocre.

We understand that you don't have much this weekend, but you'll definitely be better off recycling than trying to find even a modicum of entertainment in this unsettling snoozefest.
Share. Save. Connect.
Tweet
DIKKULU CHOODAKU RAMAYYA SNAPSHOT 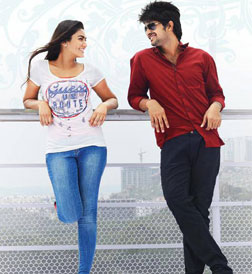 ADVERTISEMENT
This page was tagged for
dikkulu choodaku ramaya full movie online
Dikkulu Choodaku Ramayya telugu movie
Dikkulu Choodaku Ramayya reviews
release date
Shaurya, Sana Maqbool
Follow @fullhyderabad
Follow fullhyd.com on
About Hyderabad
The Hyderabad Community
Improve fullhyd.com
More
Our Other Local Guides
Our other sites
© Copyright 1999-2009 LRR Technologies (Hyderabad), Pvt Ltd. All rights reserved. fullhyd, fullhyderabad, Welcome To The Neighbourhood are trademarks of LRR Technologies (Hyderabad) Pvt Ltd. The textual, graphic, audio and audiovisual material in this site is protected by copyright law. You may not copy, distribute, or use this material except as necessary for your personal, non-commercial use. Any trademarks are the properties of their respective owners. More on Hyderabad, India. Jobs in Hyderabad.