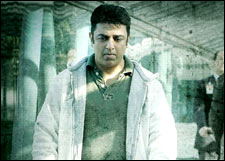 EDITOR RATING
4.0
Performances
Script
Music/Soundtrack
Visuals
7.0
3.0
7.0
6.0
Suggestions
Can watch again
No
Good for kids
No
Good for dates
No
Wait to rent it
No
The two oldest rumours in the world are (a) that there is a God, and (b) that He is good. There will perhaps never be conclusive proof either for or against those postulates, and Dasavatharam does exactly what you've done all your life - stop thinking about it when you hit a dead end.

However, where Kamal Hasan's hyped latest that seems to start off aiming to be a theological opus, fails to deliver, is that it spends as little time on this deeper aspect as you do in your own life on it, and the rest of the movie is meaningless tripe. For what is essentially a thriller, at no stage does the film really grip you. Heck, most of the time you're not even clear why the villian is after him.

Then, that whole 10-role thing seems so pointless - as you probably expected it would be even before the film released. What's the point of Kamal Hasan doing a role when he doesn't look like Kamal Hasan at all? It's not like those roles require great emoting. Kamal Hasan's acting is by nature understated, and when understatement comes from behind a thick mask, it's kinda like being served a dish with a different name and a different taste.

Dasavataram starts off with a prologue about a staunch Vaishnavite priest Govinda Rangarajan (Kamal Hasan) being tortured and killed by a Shaivite king for not turning Shaivite. It's not clear what that has to do with the movie eventually, unless the film is saying that God took revenge many centuries later by sending a tsunami on Tamilnadu. That doesn't appear to be the case, and it isn't clear then what it was all about.

The film moves to 2004 where Govindaraju (Kama Hasan) is a top-ranking scientist developing a biological weapon for the US. He discovers that his boss is trying to sell it for his personal benefit, and runs away with the vial containing the formulation, resulting in an ex-CIA man and now professional assassin Fletcher (Kamal Hasan again) coming after him.

Govindaraju flees to India in a series of unexpected circumstances, landing in Chennai and then interior Tamilnadu, and the vial lands in an idol of Vishnu. He tries to get the idol but has to contend with Lakshmi (Asin), a staunch Krishna devotee who, like the Indian state by then, believes he is a terrorist, won't let him get the vial out of the sacred idol.

The couple have to run around the hinterland escaping from Fletcher, and the movie progresses towards a grand finale where the tsunami of December 2004 hits just as the vial is about to explode.

If you are a normal compassionate human - or heck, human - you have certainly wondered about how God would have allowed 1,20,000 people to die in one night and millions rendered homeless, orphans, without a livelihood, scarred for life. Govindaraju asks exactly the same questions, and Lakshmi gives exactly the same replies as a standard-issue preacher at an ISKCON temple would.

At the end, however, the only aspect of the script that would make this movie worthy of its scale is, alas, relegated to some inadequate and diffident dithering, and the rest, like we said, is tripe. The masks on Kamal Hasan look grotesque, and it all looks like an actor indulging himself in some megalomaniacal grandeur than doing something necessary for a story to be narrated well, for a movie to work best. There was once an ANR movie called Navaratrulu where ANR played 9 different roles, and that was something different for those times, something those audiences would enjoy. How much does the thought of a movie where an actor plays 10 characters excite you now?

The 10-character bit also takes the focus away from the film itself, since you start to think that that is what the movie is all about. Kamal Hasan doesn't have much to do in terms of emoting - these are all mostly simple roles, and in any case, any impressive emoting is hidden under the masks. Asin is as expressive as usual, and so is Mallika Sherawat in a brief role.

Several characters - Punyakoti, the grandmom, and even Avtar Singh - seem shoehorned in, without really being needed for the tale or adding anything to it. The film also shows George Bush as a buffoon, and we're not sure it is even legal to showcase Bush as himself in the movie. Or Manmohan Singh or Karunanidhi. The film has only 2-3 songs (thankfully) that pass muster, especially the end-credit Lokanayaka. The visuals are expectedly tacky since this is a South-Indian film that relies on CGI.

Dasavataram is more hype than substance, lost in its main theme, and pretty lacking in focus. It is mostly for staunch Kamal fans - the rest can wait for, oh, whatever's hitting the marquees next.
Share. Save. Connect.
Tweet
DASAVATHARAM SNAPSHOT


Pros: everythging
Cons: one charecter out of 10 - one with gigantism

RATING
8
Krishna on 2nd Jul 2008, 9:13am | Permalink
Worth 1 watch. It's not everyday we get to see a plot on biochemical weapons and stuff but the way the entire thing was handled left a lot to be desired for.

RATING
5
vijay on 30th Jun 2008, 3:56am | Permalink
if anyone had watched good English movies and indian movies before then they would definitely rate this movie among the best in Indian movies and comparable to avg Hollywood flicks.

srikanth on 30th Jun 2008, 3:50am | Permalink
The reviewer of this movie seems to be amateur or a novice to judge and rate movies.
I should advice the reviewer to set some bench marks and then start comparing them based on them .

1.He did not see the plot of the movie.
2.The screen play that was fast enough to carry over the audience briskly.
3.The Photography and visual shots .
4.The action scenes.
5.The graphics.
6.Acting of Kamal in various roles not carrying a shade of print on each others.

Reviewer Read more about this movie on wikepedia ,it has more details .
Hopefully this site is not popular,otherwise the movie would not had been blockbuster hit both domestic and abroad.


hemanth727 on 29th Jun 2008, 7:49pm | Permalink
The movie as far as I could see was only a platform for Dr.Kamal Hasan to show his talent. Neighter did I see a sensible story nor screenplay. The songs were not as expected. Overall, if I were you, I would not watch the movie after reading this review and I'm sure you would thank me for the same . :)
RATING
4
Srikanth on 27th Jun 2008, 11:31pm | Permalink
Good movie to watch for technical values and crisp scrreen play and some wonderful acting by Kamal.i am from USA and have really appreciated the Flecher(Villain) role accent and bosy language;evn the bush mannerisms were good.
Makeups could have been better.Muslim charecter was like some technical gimmick,could have replaced by othet talented actors.Apart from these few abberations overall a great movie to watch this season.


Pros: visuals,acting,scrrenplay
Cons: makeup of few charecters,
sandeepjakkaraju on 24th Jun 2008, 10:38am | Permalink
waste fo time
RATING
1
ramkrishna on 17th Jun 2008, 7:17pm | Permalink
The movie overall is not so good. We can watch this movie only for kamal hasan as he occupies most of the film. Anyway guys, this movie is watchable for only Kamal's performance. Thats all i can say. Thank you.


Pros: Asin
Cons: Kamal Hasan
varma2us on 14th Jun 2008, 9:27am | Permalink
@anil_kumam: the reviewer is right, don't bring your jingoistic thinking in here. you shouldn't make an argument by giving exceptions. 95% of telugu films have sad graphics, and that's because CGI costs a lot, and the budget of a Telugu film cannot afford that given that its revenue comes only from one state's audiences. it's not derogatory, it's a fact. and stop being abusive,
RATING
4
Phaneendra Kumar on 14th Jun 2008, 12:42am | Permalink
Seriously, I didn't get what I expected from the movie. It was a waste of money and time watching this film. Very disappointed with the 10 role funda. Kamal is a world class actor but the irony is he himself seems to have forgot this.


Pros: 10 roles by an actor
Cons: 10 roles by an actor
RATING
5
Anil_kumarm on 13th Jun 2008, 10:23pm | Permalink
"The visuals are expectedly tacky since this is a South-Indian film that relies on CGI" may i know what the reviewer want to say by aying this sentence.He seems to forget that the film anji,devi has world class effects. my suggestion or whatever u may think dont expose ur dumb head by uttering whatever words u get in your mind.U r writing a review think before u scratch


Pros: anil
Cons:
Lucifer on 13th Jun 2008, 10:01pm | Permalink
I have not seen the movie, and neither do I intend to. I am here just to give my two cents on, as the reviewer rightly said, a megalomaniac actor trying to milk his previous successes. There was the apathetic portrayal of an army commando in Abhay that comes to mind. Why don't these 'acclaimed' actors / directors (a case in point being Subhash Ghai) realise that simplicity scores over style? They seem to be caught up in the web of their own grandeur, stuck in a time warp of sorts of an era where any tripe dished out in the name of cinema found an audience somewhere in the hinterland of India.
LEAVE A COMMENT
fullhyd.com has 700,000+ monthly visits. Tell Hyderabad what you feel about Dasavatharam!
MORE MOVIES
Latest Reviews
A1 Express
Power Play
Akshara
April 28th Em Jarigindi
Check
more
Pogaru (Telugu)
Naandhi
Kapatadhaari
Chakra
Chakra (Tamil)
Uppena
Zombie Reddy
G-Zombie
30 Rojullo Preminchadam Ela
Jai Sena
Contemporary Reviews
The Forbidden Kingdom
The Forbidden Kingdom (Hindi...
The Forbidden Kingdom (Telug...
Ready
Khushboo
more
Haal-e-Dil
De Taali
The Happening
Aamir
Somberi
Sex And The City
Sarkar Raj
Pandurangadu
Indiana Jones - Kingdom Of T...
Random Reviews
Dacait
Indecent Proposal
Cold Sweat (Naughty Love)
Naani
Yuva
more
Last Fury
Wanted
Family Pack
The Adventures Of Tintin
The Hobbit: An Unexpected Jo...
Goliyon Ki Rasleela Ram-Leel...
Haider
X: Past Is Present
Guest in London
2.0
SEARCH MOVIES
Dissatisfied with the results? Report a problem or error, or add a listing.
ADVERTISEMENT
SHOUTBOX!
{{todo.name}}
{{todo.date}}
[
ip{{todo.ip}}
]
{{ todo.summary }}... expand »
{{ todo.text }} « collapse
First  |  Prev  |   1   2  3  {{current_page-1}}  {{current_page}}  {{current_page+1}}  {{last_page-2}}  {{last_page-1}}  {{last_page}}   |  Next  |  Last
{{todos[0].name}}

ADVERTISEMENT
This page was tagged for
dasavatharam movie telugu
Dasavatharam telugu movie
Dasavatharam reviews
release date
Kamal Hasan, Asin
Follow @fullhyderabad
Follow fullhyd.com on
About Hyderabad
The Hyderabad Community
Improve fullhyd.com
More
Our Other Local Guides
Our other sites
© Copyright 1999-2009 LRR Technologies (Hyderabad), Pvt Ltd. All rights reserved. fullhyd, fullhyderabad, Welcome To The Neighbourhood are trademarks of LRR Technologies (Hyderabad) Pvt Ltd. The textual, graphic, audio and audiovisual material in this site is protected by copyright law. You may not copy, distribute, or use this material except as necessary for your personal, non-commercial use. Any trademarks are the properties of their respective owners. More on Hyderabad, India. Jobs in Hyderabad.