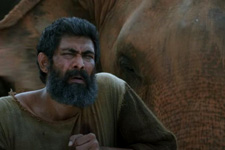 Anil Bandhakavi / fullhyd.com
EDITOR RATING
4.0
Performances
Script
Music/Soundtrack
Visuals
4.0
3.0
6.0
5.0
Suggestions
Can watch again
No
Good for kids
Yes
Good for dates
No
Wait for OTT
Yes
The deep jungle and its sheer contrast to urban life are always topics of fascination for us city-dwellers. Occasionally we even fantasise about stripping ourselves of all our possessions and living a humble life in the woods, one with nature. Aranya goes for the grandiose representations of life in the wild to satiate the daily musings evoked by rote life in the concrete jungle. In that regard, the movie attempts to take a stand against the idea of rapid urbanisation.

Aranya (Rana Daggubati) is one with the elephants in the forest, and treats them like family. For planting around a hundred thousand trees, and for his unfailing efforts to conserve the forest, he earns national recognition, and is titled "The Forest Man". The simplistic title is not far from his appearance, which could pass for a middle-aged Tarzan.

Kanakamedala Raja Gopalam (Anant Mahadevan), the villain of this piece, comes along to disturb the harmony in the woods with his longstanding dream to develop a large township in the forest that Aranya calls home. This would entail a vast clearing of flora and fauna for the construction to take place.

Aranya puts his foot down against such a takeover, and goes to New Delhi to fight it, but is outdone by a corrupt system that favours Raja Gopalam. He then decides to play to his strengths.

From an experiential standpoint, the film is very sloppy. First, characters are introduced and eliminated abruptly, and some of them have no crucial part in the story. For example, Malliyah and Malli, the brother-sister duo from one of the villages in Aranya's forest, who grow up to become Naxalites after an early traumatic encounter with the local police force. Their existence runs in parallel to the main story, but never really crosses paths with it meaningfully. A short and misplaced clip that randomly pops up shows them bemoaning the negative press coverage of Aranya's cause, suggesting that they're on his side. But these sympathetic sentiments too are not utilised by the story in any significant way.

Likewise, Singa (Vishnu Vishal), who has quite an important role in the story as the owner of a kemki elephant who lends it to Gopalam, just disappears once his part is done. He is no longer important to the businessmen who let him down once they have no need for him, but this case of bad blood is just left unresolved. Solomon could've considered having Singa take Aranya's side.

Aranya, himself, often looks like a side character in a story that is supposed to revolve around his beliefs and sentiments, leaving the story suspended at times with the different characters just doing their own thing. Even his occasional, uninspiring monologues fail to clearly suggest whether his issue with the construction project has to do with deforestation or losing his only friends, the elephants.

Aside from the monologues, most of Aranya's lines in the movie are him yelling shallow protests at anyone trying to take over the forest. As such, his character lacks depth, and his only emotions are middle-aged temper and a childlike attachment to the elephants. The totally unenigmatic personality makes you wonder if years in the forest made him unequipped to handle human exchanges. Along with this, he has a blatant twitch in his neck which seems to get activated by his hypersensitive sense of hearing which he uses to receive messages from the animals in the woods.

It's quite clear that Rana was not given much to work with, but the few attributes portrayed by him, we'd informally refer to as "overaction". And the weak performance by the film's lead is not dominated by any of the other characters, which are equally shallow in nature.

Beyond the limitations in performance, the movie has many other issues which adversely affect the viewing experience. The editing is extremely choppy, with some details stuffed in abruptly in the form of three- to four-second-long clips, as though suggesting, "Oh yeah, just remember this detail for later," or, "You might want to know this." There is at least one instance in which a scene repeats itself, and although the scene is quite trivial (just a few guys jumping off a bus in backed-up traffic), its unprofessional nature doesn't do any good to your already deteriorating impression. Another example is the way Malliyah's and Malli's feelings for Aranya are abruptly conveyed, something alluded to earlier.

The visuals, overall, fail to live up to the grand swoops displayed initially that make it seem like the movie is going for a Jurassic Park-type feel. However, to be fair to the film's background score, it manages to closely follow the drama and the jungle theme.

Aranya lacks anticipatory flavour, and the poor editing does not help its cause. Even the massive elephants are not put to good use to give the film some sense of grandness that could be harnessed for a selling point. Indeed, all the noteworthy action can be found in the trailer itself. 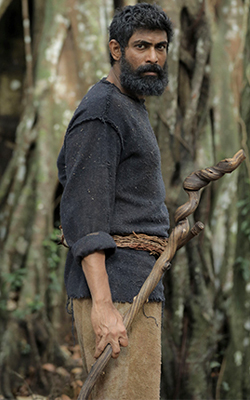 ADVERTISEMENT
This page was tagged for
Aranya telugu movie
Aranya reviews
release date
Rana Daggubati, Vishnu Vishal
theatres list
Follow @fullhyderabad
Follow fullhyd.com on
About Hyderabad
The Hyderabad Community
Improve fullhyd.com
More
Our Other Local Guides
Our other sites
© Copyright 1999-2009 LRR Technologies (Hyderabad), Pvt Ltd. All rights reserved. fullhyd, fullhyderabad, Welcome To The Neighbourhood are trademarks of LRR Technologies (Hyderabad) Pvt Ltd. The textual, graphic, audio and audiovisual material in this site is protected by copyright law. You may not copy, distribute, or use this material except as necessary for your personal, non-commercial use. Any trademarks are the properties of their respective owners. More on Hyderabad, India. Jobs in Hyderabad.