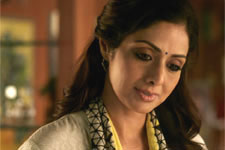 T J Reddy / fullhyd.com
EDITOR RATING
5.5
Performances
Script
Music/Soundtrack
Visuals
8.0
5.0
5.0
6.0
Suggestions
Can watch again
No
Good for kids
No
Good for dates
Yes
Wait to rent it
No
Sridevi, a superdiva of Indian cinema in the '80s and '90s, has found herself a new niche. The erstwhile glamour queen seems to have now made it a point to expose the audience at large to the oft-forgotten stories of the everyday woman. One such woman that most folk can relate to is a mother. Nearly every person that buys a ticket has had his/her life molded by a maternal figure, which brings the film its instant audience-investment.

Mom is about Devaki (Sridevi), a mild-mannered yet capable high school teacher. She keeps her household ticking along, she commands her classroom with élan, and she serves the society in her own way by imbuing values into her students, but through all her triumphs, she struggles to connect with her eldest daughter (Sajal Ali).

Her need to be accepted by her daughter leads her to help the young girl fulfill one of her wishes. This act of motherly love soon comes undone as, owing to some fragile male egos, the daughter is put through the unimaginable pain and trauma of an assault. And after the courts acquit the perpetrators and the police profess powerlessness, Devaki herself decides to exact revenge.

Vigilante justice is an oft used trope of cinema at large, be it Indian or global. Everyone from Hrithik Roshan's character in Kaabil to Batman can be classified as a vigilante. It is a basic instinct of humanity to root for vigilantes and want to turn one as most of feel that we know right from wrong and that our personal view of the world is infallible. So when Sridevi with her commanding screen presence takes it upon herself to dole out punishments, you can't help but root for her cause.

However, the execution falters. This movie feels like an effort to emulate genre specialist Shankar but by avoiding wasting too much time on the script. Narrative cohesion seems to be an afterthought as the film revels in letting Devaki go berserk with ingenuity, never stopping to establish how a regular housewife has the skills to outsmart the Delhi Police. Also, the brilliant Sajal Ali and her intensely provoking portrayal of the complex mental state of a victim of assault are glossed over in all the bandwidth given to Devaki's indulging her murderous rage.

As the film goes about with its business-friendly approach of snubbing the truly disturbing and logical by offering the audience with the seemingly cathartic, it eventually ends up at a juncture of pure confusion by the third act, and then tries to tie up all loose ends in one scene. Subtlety and nuance (which were prevalent in English Vinglish) are increasingly lost arts in modern mainstream cinema, and Mom is no exception.

Fortunately, Mom manages to distract from all its glaring cracks with a few genuinely tense sequences and excellent acting. Sridevi has been offered up her share of the praise and more already in a glorious career, and is once again the mooring of a film she is cast in. She carries the movie deftly with her comforting smile, piercing gaze and everything in between. The only capable male characters the film has on offer are played by Akshaye Khanna and Nawazuddin Siddiqui who help the film rise above its flimsy and predictable plot. The contrast between Akshaye's scowl and Siddiqui's child-like smile showcases an interesting dichotomy of men who live by a similar moral code but have wildly different interpretations of what that code actually entails.

Most other men in the film are throwaway characters who serve a purpose but don't have much else to do as they are not formidable foes to the leading lady when push comes to shove. The system, law and incompetent forensic work are much more menacing.

On a whole, Mom works a much improved revenge thriller from the bigwigs of Bollywood. The film does boast - and really goes out of its way to boast - of intelligent sequences. However, it trades in thematic complexity for that as it works on elevating itself from the run-of-the-mill vengeance dramas. I'm treading some delicate waters here, but one has to consider the fact that the audience's intelligence has risen several notches, and a predictable tale of good vs. evil with a hefty dose of flavor-of-the-month feminism thrown into the mix doesn't move the dial on the quality metre as it did in Sridevi's heyday.
Share. Save. Connect.
Tweet
MOM SNAPSHOT

ADVERTISEMENT
This page was tagged for
Mom hindi movie
Mom reviews
release date
Sridevi, Adnan Siddiqui
theatres list
Follow @fullhyderabad
Follow fullhyd.com on
About Hyderabad
The Hyderabad Community
Improve fullhyd.com
More
Our Other Local Guides
Our other sites
© Copyright 1999-2009 LRR Technologies (Hyderabad), Pvt Ltd. All rights reserved. fullhyd, fullhyderabad, Welcome To The Neighbourhood are trademarks of LRR Technologies (Hyderabad) Pvt Ltd. The textual, graphic, audio and audiovisual material in this site is protected by copyright law. You may not copy, distribute, or use this material except as necessary for your personal, non-commercial use. Any trademarks are the properties of their respective owners. More on Hyderabad, India. Jobs in Hyderabad.