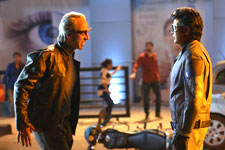 T J Reddy / fullhyd.com
EDITOR RATING
6.0
Performances
Script
Music/Soundtrack
Visuals
6.0
4.0
6.0
8.0
Suggestions
Can watch again
Yes
Good for kids
Yes
Good for dates
Yes
Wait to rent it
No
Shankar's name pops up twice in his latest venture's opening credits. The first instance of which is his for writing and directing the movie, business as usual. While we don't remember the exact technical terminology quite as well, the man is also credited with conceiving the film's action set-pieces. Shankar 2.0 has arrived.

2.0, the film, however, is an over two-and-a-half-hour balancing act as Shankar the storyteller and Shankar the master of imagination sit on either end of the proverbial balance pole as the massive cast and crew of the film walk the tightrope of creating a satisfying version of big-budget popcorn cinema. The view beneath their feet is precarious simply because there is no safety net to break their fall. A certain band of Thugs found that out the hard way. The latter are being scraped off the cold hard ground as we speak.

As the filmmakers walk their tightrope, let's closely examine their form. The most eye-catching aspect of 2.0 is that it is sans romance track, comedy track, song breaks and many such unwelcome distractions. The film hits the ground running from second one as we watch a frail old man take his own life by hanging his mortal self from a seemingly-innocuous cell phone tower.

One quick and underwhelming visit of the lab of Dr Vasikaran (Rajinikanth) later, we are shown every mobile phone in the massive metropolis gain a certain degree of sentience. These phones slip out of their owners' hands and fly away to an undisclosed location. While the government, law enforcement and scientific community are hard at work trying to crack what just happened, a select group of people and cell towers are creatively eliminated off the face of the earth en masse by a sea of murderous phones.

2.0's emotional core begins and ends with Akshay Kumar's layered portrayal of this one-note character. There is a pathos to Pakshi Raja and none of it is a result of his shamelessly on-the-nose name. He is a prototypical Shankar protagonist - a decent man in an indecent time who dies a symbolic death as a hero but lives long enough after that to see himself become the villain. In a run-of-the-mill of Shankar film, he would be the one we'd be cheering for a la Ambi from Aparichitudu.

However, lest we forget, this is a Rajini vehicle. No one upstages Rajini but Rajini himself, and one gets this sense of one version of Rajini upstaging the other because two of the four versions of Rajini this film offers are not like their counterparts. The two suspect versions in question are Dr Vasigaran and his original creation, Chitti. Without the philosophical questions or the affections of a missing Aishwarya Rai to fuel their plot lines, the inherent blandness of their character designs is alarmingly evident.

Every time the film gives itself and its audiences a breather from the action (in the first half), we spend the downtime with these two downers and their terminally vanilla robotic assistant played to perfection by the equally robotic Amy Jackson. With a lack of strong characters powering the film's effects-driven action, the entire 3D experience comes precariously close to fizzling out and crash landing in that Thugs-shaped hole in the ground.

When all hope seems lost, the film inserts into itself the fabled red chip. The horn section of A R Rahman's orchestra comes out all trumpets blazing as Chitti reboots himself to unleash his evil twin on to silver screen after 8 long years. Back are the delightfully cheesy one-liners, back is Rajini's trademark evil laugh, back are 2.0's meme-worthy histrionics, and back in full force is Shankar's unbridled imagination.

2.0's character was so well etched in 2010's original that the motivation for his actions can be explained in one line and the audience as a collective can buy into it hook, line and sinker. With no more story left to tell, Shankar lets the second version of himself run wild, and the visual splendour that accompanies it is par excellence. Unlike big-budget Hollywood rock-'em, sock-'em robot films a la Transformers or Pacific Rim, 2.0's giant action set-pieces have a psychology and playfulness about them. From executing sweet wrestling moves such as Hurricanranas and power-bombs to paying homages to classics of sci-fi past with subtle touches in combat dynamics to forging its own path with a spectacular resolution, 2.0's finale is Shankar's world, and we are all lucky to be living in it.

This world of inspired carnage showcases the best of everyone involved. Rajinikanth is back to being his classic villainous self, Akshay Kumar is allowed to explore a facet of his performing repertoire that is rarely, if ever, poked at by other filmmakers, and A R Rahman and his Oscar-winning sound designer Resul Pokutty too seem rejuvenated to power this epic battle with sounds of clanging metal, crashing phones and a magniloquent score that is in equal parts epic and subtle.

But once this battle for the ages reaches its conclusion, the story, too, is not too far behind. The film, itself, rejects the idea that it has to spend more than two minutes with its one-note protagonists as it ties up every other loose plot point in a hurry. And with that, we see 2.0 for what it is. Unlike 2016's mythological fantasy epic Baahubali, futuristic fantasy epic 2.0 has no one to root for except for inanimate items such as visual effects and action set-pieces. Chitti and his evil twin were the product of the movie gone by, and the film's morals can be consumed via many a tedious news update on your own phone.

After Baahubali concluded, we were aching as we saw Amarendra and Mahendra Baahubali, Kaatappa, Sivagami, Devasena, Bhallala Deva and S S Rajamouli's epic vision fade to black. Through many trials and tribulations, Shankar does stick his landing, but left in its wake are a series of forgettable characters and a triumph of imagination over an adherence to the fundamentals of story-telling and characterization which are valid in both pre-historic and futuristic times. We will miss Shankar's larger-than-life scope and scale, but we are unsure if we will remember, let alone miss, anything else about 2.0.
Share. Save. Connect.
Tweet
2.0 (HINDI) SNAPSHOT 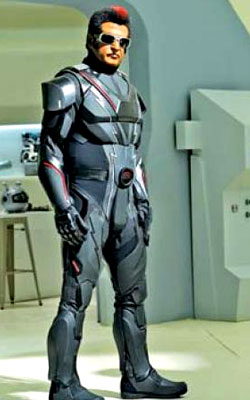 ADVERTISEMENT
This page was tagged for
2.0 full movie in hindi
2.0 (Hindi) hindi movie
2.0 (Hindi) reviews
release date
Rajinikanth, Akshay Kumar
Follow @fullhyderabad
Follow fullhyd.com on
About Hyderabad
The Hyderabad Community
Improve fullhyd.com
More
Our Other Local Guides
Our other sites
© Copyright 1999-2009 LRR Technologies (Hyderabad), Pvt Ltd. All rights reserved. fullhyd, fullhyderabad, Welcome To The Neighbourhood are trademarks of LRR Technologies (Hyderabad) Pvt Ltd. The textual, graphic, audio and audiovisual material in this site is protected by copyright law. You may not copy, distribute, or use this material except as necessary for your personal, non-commercial use. Any trademarks are the properties of their respective owners. More on Hyderabad, India. Jobs in Hyderabad.