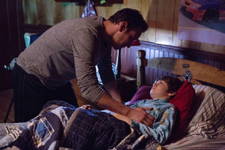 Nupur Barua / fullhyd.com
EDITOR RATING
5.0
Performances
Script
Music/Soundtrack
Visuals
6.0
4.0
7.0
6.0
Suggestions
Can watch again
No
Good for kids
No
Good for dates
No
Wait to rent it
Yes
When Leigh Whannell wrote Saw, he was hospitalised for anxiety and other issues. This is where he realised that his antagonist in Saw, Jigsaw, should have cancer. Somehow, or so it seems, his preoccupation with hospitals as a source of depression did not end there. This time, in Insidious Chapter 2, which he has written as a sequel to Insidious, a few main characters decide that they need to go to an old hospital to find the source of evil.

But wait - that comes later. Insidious Chapter 2 begins with a prologue that is actually a flashback. Young Josh (Garrett Ryan) sees things, and his worried mother Lorraine (Jocelin Donahue) calls the mediums Carl (Hank Harriss) and Elise (Lindsay Seim) to find out what is wrong with the boy.

Discovering that Josh has the ability to travel out of his body and other weird things, the adults decide that hypnotism is the only way to forget, and Elise implements the procedure.

The story then shifts to the present day, where Renai (Rose Byrne) is still recovering from the events that are shown in Insidious (yes, this is a literal sequel). She has shifted, with her family, to her mother-in-law Lorraine's (Barbara Hershey) house. However, strange occurrences take place, and Renai does not know quite what to make of them, and her husband Josh (Patrick Wilson) is a little too calm for all this pandemonium.

In terms of story, this instalment of the franchise becomes a little too complicated. The suggested time travel and other details leave you more confused than frightened. Besides, the characters constantly move through tunnel-like spaces and get nowhere.

After a point, their discoveries become predictable, and the sudden appearances of other beings become less and less terrifying. Toward the end, logic disappears, and plot points are resolved with more convenience than conviction. The dialogues are redundant.

However, it is the tunnel vision (literally) that also spooks you out. There is a sense of constriction in movement, and you wait for the next shocker with eagerness, since you anyway throw reason and disbelief out of the window. The cinematography tries to enhance this aspect of the screenplay by using wide angles, but is otherwise rather lazy.

On the other hand, production design sticks to the tried and tested monotones and timeless set-ups to portray two different periods. Even the costumes are not well thought-out.

The sound effects are slightly off-sync with the sequences, almost as if stock music was put in as an afterthought with no attention paid to the content. The resolution, when it does happen, after endless walking around, is not satisfactory.

Patrick Wilson sleepwalks (literally) through his role. He manages to look evil once in a while, but is otherwise pretty staid with his expressions.

Rose Byrne is perpetually in fear and shock. Lin Shaye exhibits more spunk, although she has less to do.

Barbara Hershey is more or less consistent. Steve Coulter seems confused, but Leigh Whannell and Angus Sampson provide slight comic relief once in a while to keep you from getting restless.

The first movie, Insidious, was a revelation of sorts. It had more meat, and, as is the case with most sequels, this one loses steam. Especially now that the audience has been exposed to The Conjuring (in which the protagonist is Patrick Wilson, again - must be something about his face). Watching it in a theatre will not make it a better experience, so go for it only because you are a Whannell fan. Otherwise, avoid.
Share. Save. Connect.
Tweet
INSIDIOUS: CHAPTER 2 SNAPSHOT 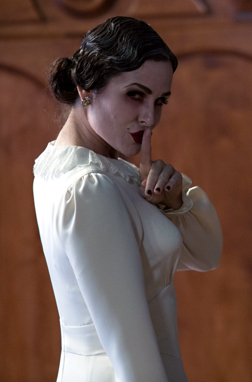 ADVERTISEMENT
This page was tagged for
Insidious: Chapter 2 english movie
Insidious: Chapter 2 reviews
release date
Patrick Wilson, Garrett Ryan
theatres list
Follow @fullhyderabad
Follow fullhyd.com on
About Hyderabad
The Hyderabad Community
Improve fullhyd.com
More
Our Other Local Guides
Our other sites
© Copyright 1999-2009 LRR Technologies (Hyderabad), Pvt Ltd. All rights reserved. fullhyd, fullhyderabad, Welcome To The Neighbourhood are trademarks of LRR Technologies (Hyderabad) Pvt Ltd. The textual, graphic, audio and audiovisual material in this site is protected by copyright law. You may not copy, distribute, or use this material except as necessary for your personal, non-commercial use. Any trademarks are the properties of their respective owners. More on Hyderabad, India. Jobs in Hyderabad.