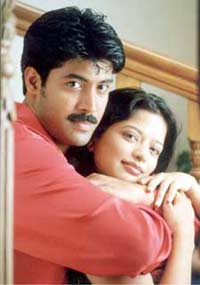 Smriti Kashyap / fullhyd.com
EDITOR RATING
3.0
Performances
Script
Music/Soundtrack
Visuals
NA
NA
NA
NA
Suggestions
Can watch again
NA
Good for kids
NA
Good for dates
NA
Wait to rent it
NA
You know it's gonna be one heck of a party when you see people whip out jars of fluid and begin to embalm each other after unraveling loads of bandage. This is exactly what you get to see at this flick. Manasutho is one of those ghastly films whose primary aim in life is to serve as a warning to all and sundry.

The film starts off Kanishk (Akash) playing a happy-happy-jally-jally teenaazee boy singing colleaazee songs, with overfed ladies hovering dangerously in the background like spaceships looking for parking space. A confirmed bachelor for life, he doesn't buy into the love-shove scam.

But Lord Venkateshwara has plans in store for him. On a fateful trip to Tirupati with his squabbling family, he encounters model-turned-Egyptian-mummy Sapna (Arzoo Govitrikar). During one of the pit stops, she gets off the train to hear a cuckoo go "koo-koo" in the background. She decides to add her two bits of the melody, and continues with her full-throated rendition of the cooing.

Amidst all this bird-female orchestra, the train gets going, leaving poor Sapna with her feathered friend. This is when the hero, abandoning his white steed for a train, pulls the chain, hence enabling the damsel in distress to get in to re-park herself in his compartment, hence paving the way for their love story.

A clean desk is a sure sign of a cluttered desk drawer, and thus we are pulled into a subplot. Now there is this guy who desperately wants to be in the same train as his ladylove. Just remember this point as a footnote for further reference.

Anyway, on the other end of the horizon, we see Sapna go ga-ga over Kanishk, and manages to get engaged to this guy who's about as interested in a steady relationship as a meandering tom cat.

Enter Balu, the lovelorn guy who wanted to get into the train. Now this guy has been madly in love with none other than Sapna for the past coupla years. Not having the guts to tell her, he pines away silently. So basically he's the sort who would die in his own arms. Kanishk gets to meet Balu later and finds out about the latter's unprofessed love. What he does with that extra bit of info is the driving technology behind this flick.

Too late, pals, we're already semi-dead 15 minutes into the flick. Kanishk and his motley crue of comedians try their best to throw the sinking movie a coupla life jackets. Naaah, no luck on that either!

It's the usual blaaat kinda movie with more raunchy numbers than Midnight Masala. The script is as old as the hills, and seems to be written by someone who got mental blocks for Christmas. The actress leaves a lot to be desired, as her gamut of emotions spans all the way from A to B. The movie, though, is strewn with one-liners in order to distract you from a meandering script.

Another afternoon, another trip to the gas chamber. What can I say! The human spirit is very hard to kill, even with a chainsaw such as Manasutho.
Share. Save. Connect.
Tweet
MANASUTHO SNAPSHOT

See Manasutho full details
MANASUTHO USER REVIEWS
1 - 6 OF 6 COMMENTS
POSITIVE  |  NEGATIVE |  NEWEST  |  OLDEST  |  MOST HELPFUL  |  LEAST HELPFUL
USER RATING
6.0
5 USERS
Performances
Script
Music/Soundtrack
Visuals
NA
NA
NA
NA
Can watch again - NA
Good for kids - NA
Good for dates - NA
Wait to rent it - NA
Vishal on 23rd Jul 2019, 10:46pm | Permalink
I am here in 2019.
Raj on 1st Jun 2002, 2:09pm | Permalink
If you ever thought of breaking your head unable to bear your headache then you would tend to perform this stunt in the theatre featuring this movie !! One more movie in the flock of youth movie trend which doesn't make any impression. For people who didn't get convinced and are still alive reading this review, lets go into the movie !!!

Kanishk (Akash) is brought up in a affluent family and aslike in other movies has a bunch of friends who does absolutely nothing apart from commenting girls whenever and whereever they appear on the screen. The comic scenes are hackneyed and i bet not even one such scenes will bring a smile on your face...ok ok we are slipping lets come to the movie..

Then there comes tirumala express in which our hero along with his family members(AVS, Sudha and his Sis..better remembered as sister of Aarthi in Nuvvu Naaku Nachav) to tirupathi. It happens that our heroine also takes that train to tirupathi and no points for guessing that she sits in the same compartment. Next half an hour we will have partial tirupathi darshan with movie ticket !! Our Heroine falls for Kanishk's frankness,generosity..etc..etc.. And the scenes that were created to show Hero's above mentioned features makes you feel that you are watching a stage drama. Anyway our heroine is flat, indicating start of a love story. When they return back she proposes and Kanishk promptly replies back that she has to get consent from his parents. Everything goes fine and engagement is done. Now there should be some twist for the Interval right...so the director knowing that he has to give some twist to the movie runs parallelly a silent lover character who deeply loves his collegemate and ruins his career for that girl.Before Interval that girl happans to be our heroine !

If u still wanna see the movie go out and get a drink for yourself coz atleast u can do something other than watching movie.

The remaining film revolves around Kanishk wo gets a hint of the stranger's(who happens to interact with kanishk in some CREATED scenes) love tries to unite his Would-be with that ardent lover.

coming to other technical details of the film, two songs are espacially melodic. Comedy, needs a little mention. Performance,Akash has to improve in many departments..he has got good looks but people who come to a movie expect many things from a telugu hero as they are accustomed watching NT Rama Rao, Krishna and Chiranjeevi doing various things in the movie. Coming to Arju, the whole credit does to director for making a Dumb girl like Arju to do something in the movie..She could not act, she could not dance, she could not deliver expressions. Ofocurse you won't expect telugu (alias bombay) heroines to do all these things. Atleast they add glamour to the movie. Arju added Horror instead of Glamour.

The film could have been dealt with more sensitivity as the subject is fresh and tender like Akash's previous filn 'Aanandam'.
Director failed to bring that sensitive touch to the movie.

Hey you have to appreciate my effort of writing such a lengthy description of this movie which i would hate most to do.But the bottomline is that i won't want fullhyd ppl not to waste their summer afternoon watching such a movie like this.

ADVERTISEMENT
This page was tagged for
manasutho telugu movie story
manasutho telugu movie wiki
manustho telugu movie
manasutho akash movie
manasutho movie telugu akash
Follow @fullhyderabad
Follow fullhyd.com on
About Hyderabad
The Hyderabad Community
Improve fullhyd.com
More
Our Other Local Guides
Our other sites
© Copyright 1999-2009 LRR Technologies (Hyderabad), Pvt Ltd. All rights reserved. fullhyd, fullhyderabad, Welcome To The Neighbourhood are trademarks of LRR Technologies (Hyderabad) Pvt Ltd. The textual, graphic, audio and audiovisual material in this site is protected by copyright law. You may not copy, distribute, or use this material except as necessary for your personal, non-commercial use. Any trademarks are the properties of their respective owners. More on Hyderabad, India. Jobs in Hyderabad.