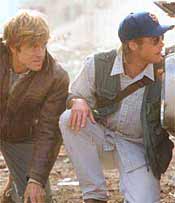 Smriti Kashyap / fullhyd.com
EDITOR RATING
6.0
Performances
Script
Music/Soundtrack
Visuals
NA
NA
NA
NA
Suggestions
Can watch again
NA
Good for kids
NA
Good for dates
NA
Wait to rent it
NA
What sort of a spy agency lives in a building full of glass walls? Well, that would be the same CIA in Spy Game. Spook Central looks more like an Arthur Andersen office than any other spy building I've seen in the past couple of decades.

Anyway, Spygame brings two generations of America's prettiest, cleanest and whitest poster boys to pose as the mentor-protégé buddy boy team of Nathan Muir (Redford) and Tom Bishop (Pitt). It's a different issue that the once-upon-a-time Sundance Kid looks like someone just did a tango all over his face. Someone get a sheet of taut skin - stat!

Looks apart, the film primarily zips off with a half-ass escape stunt by Pitt in a Chinese jail, which gets his ass boldly hauled to where no man's ass has ever been hauled before. And this piece of not-so-gratifying news gets to Muir - who is on the precipice of retirement.

In office for his last day of work and also to pack some of his stuff up - like that rather nice looking stapler and the CIA stickers - he gets summoned by a bunch of corporate looking head spooks who want to put a file up on Bishop and decide how to wrangle him out of the Chinese cell.

The CIA just has 24 hours before the Pitt boy execution is scheduled, and Muir gets called in. And between snatches of flashback, we arrive at the conclusion that Redford has to view 8*10 black and white glossies of Pitt and try to spring him before the Chinese skunk him for good.

The flashback thing kicks into action and keeps going on and on, and traces the making of Bishop, the spook. With him having been in NAM, Beirut and Germany, the film throws snatches of international espionage our way. A grizzly plot is discovered, and we're glued to the screen. But the bummer is that the flick is noisily time-stamped. You are watching, then all of a sudden BANG - time stamp! Hey fellas, give it a rest, willya? I'm here for a flick, not a German goose-step parade.

Spy game, though, is fun, and holds your attention when it isn't trying too hard. It is sorta fast paced, but you could really do with someone working the gas pedal a little more. Anyway, a whodunit to the core coupled with a 'why're they doin' it' makes this flick an okay way to kill an afternoon. Just as easy as watching a 4-hour documentary on Olive Ridley turtles.

Don't forget to check the corny one-liners crawling around. And Redford gets to mouth most of them - I wonder why. I guess Pitt doesn't have the charm to carry off corn. Try this one for size: "Hey! Are you going to dance around with your hand on my ass all night, or are you going to make a move?" Like these yanks swear, Jeez!
Share. Save. Connect.
Tweet
SPY GAME SNAPSHOT

ADVERTISEMENT
This page was tagged for
Spy Game english movie
Spy Game reviews
release date
Robert Redford, Brad Pitt
theatres list
Follow @fullhyderabad
Follow fullhyd.com on
About Hyderabad
The Hyderabad Community
Improve fullhyd.com
More
Our Other Local Guides
Our other sites
© Copyright 1999-2009 LRR Technologies (Hyderabad), Pvt Ltd. All rights reserved. fullhyd, fullhyderabad, Welcome To The Neighbourhood are trademarks of LRR Technologies (Hyderabad) Pvt Ltd. The textual, graphic, audio and audiovisual material in this site is protected by copyright law. You may not copy, distribute, or use this material except as necessary for your personal, non-commercial use. Any trademarks are the properties of their respective owners. More on Hyderabad, India. Jobs in Hyderabad.