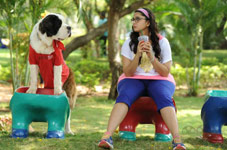 Ravi Kandala / fullhyd.com
EDITOR RATING
5.5
Performances
Script
Music/Soundtrack
Visuals
7.0
4.0
5.0
7.0
Suggestions
Can watch again
No
Good for kids
No
Good for dates
No
Wait to rent it
No
We hear of actors undergoing extreme transformations for the sake of a role in Hollywood, and go ooh and aahhh. However, when our own actors do things like that, they are often dismissed as gimmicks. Well, we really hope that changes for the sake of Anushka Shetty. For, what she's done for Size Zero is supremely risky and extremely impressive.

Imagine an actress coming off the high of Baahubali and the not-so-high of Rudramadevi, and one waiting for another sureshot blockbuster in the form of Baahubali 2, signing on a movie like Size Zero where glamour goes out of the window. And then, she does not use prosthetics to look fat but puts on weight instead - loads of it. From the round face enhanced by the spectacles, to the oversize T-shirts and the goofy hairdo, Anushka's gone the whole hog for this one. A bow to her.

Size Zero, as the name quirkily suggests, is about a "healthy" girl, Soundarya aka Sweety (Anushka). She lives with her mother Rajeswari (Urvashi), brother Yahoo (Bharat) and grandfather (Gollapudi Maruthi Rao). Rajeswari's single-point agenda is to get her daughter married, but most (or all) suitors are driven away by Soundarya's weighty issues.

One of them is Abhi (Arya), an NRI documentary filmmaker who's in India to work on a Clean India campaign. Abhi and Soundarya become friends and start hanging out together. Soundarya starts believing Abhi likes her but when she sees him going out with Simran (Sonal Chauhan), she's heart-broken, and decides to join Size Zero, a slimming clinic that promises instant weight loss.

A couple of weeks later, one of Soundarya's friends collapses during a weight loss session in Size Zero, and is taken to the hospital where it is revealed that due to the fat burner shakes given in the clinic, she's suffered permanent damage to one of her kidneys. This prompts Soundarya to take up the fight against Size Zero's owner, Satyanand (Prakash Raj).

Director Prakash Kovelamudi (who'd directed the disastrous Anaganaga Oka Dheerudu earlier), still has a Disneyish hangover. His story-telling has a magical, fairy-like quality to it. He uses snow-globe-style visuals to depict all the magical moments in his heroine's life. And the heroine's obsession with fortune cookies and with the fortune predicted behind tickets that weighing machines spew out for a rupee is all depicted in a very cartoony manner.

While this story-telling technique works fine in some places, it also takes the gravitas away from a lot of other situations. Result: the emotions don't come out as strongly as they should have, and thus make this a "light" movie. The humor works in a few places, though - there are laugh-out-loud lines, and situations where the entire audience bursts out spontaneously. More of that, and Size Zero would have worked better.

Anushka takes top honours in the acting department as we've mentioned. It is a heavy-weight performance, and she gives it her all - literally. Arya supports her ably, but his dubbing is terrible. Urvashi and Gollapudi Maruthi Rao put in wonderful performances, too.

The film is technically rich, and the songs work decently in the background, but the editing could have been better (read "snipped the movie by around 15-20 minutes").

Size Zero is a one-time watch if only for Anushka. Ironic that after preaching big is beautiful in this film, she finds herself under immense pressure to lose weight and "get back in shape" for Baahubali 2.
Share. Save. Connect.
Tweet
SIZE ZERO SNAPSHOT 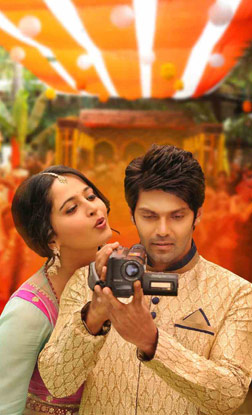 ADVERTISEMENT
This page was tagged for
Size Zero telugu movie
Size Zero reviews
release date
Anushka Shetty, Arya
theatres list
Follow @fullhyderabad
Follow fullhyd.com on
About Hyderabad
The Hyderabad Community
Improve fullhyd.com
More
Our Other Local Guides
Our other sites
© Copyright 1999-2009 LRR Technologies (Hyderabad), Pvt Ltd. All rights reserved. fullhyd, fullhyderabad, Welcome To The Neighbourhood are trademarks of LRR Technologies (Hyderabad) Pvt Ltd. The textual, graphic, audio and audiovisual material in this site is protected by copyright law. You may not copy, distribute, or use this material except as necessary for your personal, non-commercial use. Any trademarks are the properties of their respective owners. More on Hyderabad, India. Jobs in Hyderabad.