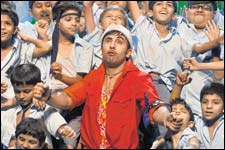 Nupur Barua / fullhyd.com
EDITOR RATING
7.0
Performances
Script
Music/Soundtrack
Visuals
8.0
8.0
8.0
8.0
Suggestions
Can watch again
Yes
Good for kids
Yes
Good for dates
Yes
Wait for OTT
No
To be honest, not too many people know what to expect from a children's film. Taare Zameen Par and Stanley Ka Dabba were more for adults, despite the child protagonists in both. Zokkomon was a travesty in the name of kiddie entertainment. For all those apprehensive parents, and their kids, who are tired of 'family entertainment' such as Love U...Mr. Kalakaar and similar inanely 'clean' movies, there's good news - Chillar Party is a movie about kids and for kids (and parents), and an excellent attempt at reviving the genre.

Produced by Salman Khan and UTV, Chillar Party is nothing less than wholesome entertainment. Vikas Bahl and Nitesh Tiwari are obviously inspired by Enid Blyton, at some level, and you cannot go wrong with that kind of stimulation. The whole film is one big adventure, absolutely relatable, and straight from the heart.

A group of kids, all boys, live in a colony named Chandan Nagar, somewhere in Mumbai. Their gang is called the 'Chillar Party'. They have nicknames for one another, derived from individual traits or situations. There is an 'Akram', who is a fast bowler; a 'Second Hand', who lives on his elder brother's hand-me-downs; a 'Shaolin', who loves everything 'Chinese'; a 'Jhangiya', who is a movie buff; an 'Aflatoon', whose parents have enrolled him in every class possible; a 'Panauti', whose statements bring unwanted results; a 'Silencer', who never speaks; and an 'Encyclopaedia', who knows it all and is also the narrator of the film.

Enter Fatka and his dog, Bheedu. Fatka replaces an older relative, who washes all the cars in the colony. The Chillar Party boys dislike him at sight, and try to make his life as miserable as possible. However, they realise the folly of their ways and befriend Fatka, just in time for the latter to lead their ever-losing cricket team to victory against the oversized boys of the neighbouring society.

Bheedu, Fatka's constant companion, gets nasty with the sleazy secretary of a visiting politician, and chaos sets in. The Welfare Minister (for that was who the politician was), takes this rather personally, and orders for all stray dogs to be rounded up unless they have an NOC from the inhabitants of the area.

The kids, who have no real power in a world determined by adults, decide to take it upon their little selves to somehow save Bheedu. They defy, cajole and manipulate their parents, without inhibitions; because that is the only way their opinions can be heard. What happens thereafter is anybody's guess, but the entire journey is a joyride.

The children are not too sweet, and neither are they too obnoxious. They are just kids, and the actors portraying the characters are nothing short of brilliant. Irrfan Khan, who plays Fatka, is the most natural, but the scene-stealer is definitely the mischievous Jhangiya (Naman Jain). Credit for their performance goes to the directors, of course, but all the kids are gifted actors, and a delight to watch.

The adults have a substantial role, but the movie is shot entirely from a child's viewpoint, and you will find yourself rooting for the boys and their sincere efforts to save a 4-legged friend. This story about unlikely friendships is engaging, fun, and poignant, with a few exaggerated, convenient solutions, but there is never a dull moment. The moral of the story is this - if you believe that something is right, even if it makes some people unhappy, then you should protect that belief.

Ranbir Kapoor's much-hyped item number, Tai Tai Phiss, does not disappoint, but the video is played only when the end credits roll, unfortunately. Before that, there is a montage of some behind-the-scenes footage that you should not miss.

You may need some tissue if you are fond of dogs and children, because there are few dry eyes in the theatre. However, you will definitely leave with a smile on your face, and maybe even salute Salman Khan for giving us something so honest and pure.
Share. Save. Connect.
Tweet
CHILLAR PARTY SNAPSHOT

ADVERTISEMENT
This page was tagged for
Chillar Party hindi movie
Chillar Party reviews
release date
Irrfan Khan, Sanath Menon
theatres list
Follow @fullhyderabad
Follow fullhyd.com on
About Hyderabad
The Hyderabad Community
Improve fullhyd.com
More
Our Other Local Guides
Our other sites
© Copyright 1999-2009 LRR Technologies (Hyderabad), Pvt Ltd. All rights reserved. fullhyd, fullhyderabad, Welcome To The Neighbourhood are trademarks of LRR Technologies (Hyderabad) Pvt Ltd. The textual, graphic, audio and audiovisual material in this site is protected by copyright law. You may not copy, distribute, or use this material except as necessary for your personal, non-commercial use. Any trademarks are the properties of their respective owners. More on Hyderabad, India. Jobs in Hyderabad.