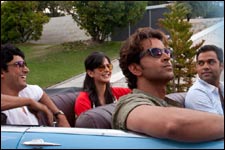 Nupur Barua / fullhyd.com
EDITOR RATING
5.0
Performances
Script
Music/Soundtrack
Visuals
5.0
5.0
5.0
7.0
Suggestions
Can watch again
No
Good for kids
No
Good for dates
Yes
Wait for OTT
No
Fact: pretty locations and bare chests doth not a movie make. With modern technology (read: camera work and post-production miracles), or despite it, content should be king, but alas, that is not the case with Zindagi Na Milegi Dobara.

Zoya Akhtar's critically-acclaimed debut, Luck By Chance, should have paved the way for her to attain greater heights. Unfortunately, she has fallen prey to the omnipresent God of all things Bollywood - mediocrity (also known as pretension). Her latest offering, Zindagi Na Milegi Dobara, a bromance, is a disappointment. It is not Dil Chahta Hai, nor is it The Hangover. In fact, it is everything but a real portrayal of life as we know it.

Kabir (Abhay Deol), the son of a construction magnate, proposes to his spoilt-little-rich-girlfriend, Natasha (Kalki Koechlin), after 6 months of dating her, because he does not have the pluck to suggest that they wait. With the impending end of single life, Kabir decides to go on a road trip in Spain with his two best friends, Arjun (Hrithik Roshan) and Imran (Farhan Akhtar).

The deal is this - each one chooses a destination that will allow them to experience a sport/activity that all must participate in - all in Spain, of course. The location could have been Brazil for all you care, but one can only assume that the director thought Spain would be more picturesque.

And to prove it, the first half of the movie looks like a travel documentary. Beaches, mountains, rivers, taverns, seas, countryside, horses, fields - you name it, and you will see it in the movie.

For a bachelor movie, as it claims to be, Zindagi Na Milegi Dobara is rather tame. None of the boys - okay, men - is interested in any debauchery. Their idea of fun is to scare strangers in public loos and deserted roads. Within the first few minutes, one is privy to the knowledge that Arjun and Imran have had a problem earlier, and that all of them are weighed down by loads of baggage they cannot get rid of. There goes the fun.

Surprisingly, none of them feels the need to share their deepest, darkest secrets with each other. So much for eternal friendship and bromance. At times, the 3 men look almost uncomfortable with one other, and their bantering seems rather forced.

And thus the friends continue their trip, discovering life, and not complaining about how serious this fun trip has turned out to be. You may be almost hooked to the plot till intermission, but once you have replenished your popcorn tubs, you will shift and groan, and wait for the 154 minutes to come to an end. Even Hrithik's dancing cannot distract you too much, although it is a welcome relief.

All the three leads share equal screen time, and Hrithik gets a little more, since he is a superstar. While their individual performances cannot be criticised, the chemistry amongst them is conspicuous by its absence. Hrithik pouts a lot less, compared to his recent movies. Abhay is serious, and finally, a commercial, film actor. Farhan plays the buffoon, but his poetry-reciting (courtesy Javed Akhtar) as a voice-over in certain scenes baffles the mind.

Katrina smiles a lot. Hrithik and she make a good-looking couple, but, again, no chemistry, not even in the kiss on the highway - aesthetically shot, though. Kalki screeches a bit, and does not have much to do.

So when Naseeruddin Shah makes an appearance in a cameo, you remember what true actors are all about. Deepti Naval is wasted as Farhan's mother.

The visuals are great, but not as awesome as you'd expect. Cinematographer Carlos Catalan makes use of wide angles to show as much of Spain as possible. Costumes, by Arjun Bhasin, are decent, too. However, what on earth is Hrithik doing with hennaed hair? In certain shots, he looks like his father in Paraya Dhan. The songs are somewhat forgettable, and the Tomatina song may put you off tomatoes for life, which is what happened to Katrina.

ADVERTISEMENT
This page was tagged for
Zindagi Na Milegi Dobara hindi movie
Zindagi Na Milegi Dobara reviews
release date
Hrithik Roshan, Katrina Kaif
theatres list
Follow @fullhyderabad
Follow fullhyd.com on
About Hyderabad
The Hyderabad Community
Improve fullhyd.com
More
Our Other Local Guides
Our other sites
© Copyright 1999-2009 LRR Technologies (Hyderabad), Pvt Ltd. All rights reserved. fullhyd, fullhyderabad, Welcome To The Neighbourhood are trademarks of LRR Technologies (Hyderabad) Pvt Ltd. The textual, graphic, audio and audiovisual material in this site is protected by copyright law. You may not copy, distribute, or use this material except as necessary for your personal, non-commercial use. Any trademarks are the properties of their respective owners. More on Hyderabad, India. Jobs in Hyderabad.