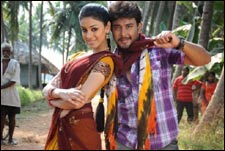 Much as our sympathies lie with the once-rising star, for having had his career so tragically truncated, his was the underdog story gone wrong. Largely limited by voice, adolescent looks and physical build (other than, of course, the lack of a filmi family backing), Uday Kiran was an actor who'd always leave you wondering - will he make it? Will he, with his mild and middle-class looks and demeanour, be any match to the baritone-voiced, sweaty, rugged, tough-talking men populating our movies?

And so it is with Tanish, an Uday Kiran clone in many ways, except, probably, for the financial backing bit. Having started out with a teenage-ish role, Tanish let his baby-faced-ness come in the way of his subsequent movies, which mostly required him to be a "hero".

Kodi Punju, then, is a sort of a resurrection vehicle for the kid. The flick is a "typical" mass movie with a teen macho dude who the village belle falls in love with, and who can beat up as many goons as the scene requires him to. Despite Tanish's natural weaknesses, this is a flick that is much better made than his earlier ventures, and exploits the actor's potential better than those movies did.

He plays Abhi, the said village hero, the son of Sitaratnam (Roja). After having audaciously walked up to a girl called Nandini (Anchal) and told her how beautiful she is, Abhi is now Nandini's love interest.

Now, Nandini is the daughter of the no-nonsense president of Abhi's neighbouring village, who has an enemy in the form of the local goon and aspirant to the president's chair, Bapineedu. Things proceed exactly by the numbers, after which a happy ending falls in place.

As for the script, Kodi Punju's is a very basic plot, with a love affair, a stern father, a wily villain, and sidekicks all over. The director builds up enough drama to make things look interesting, and the visuals are slick as well. There's a good soundtrack aiding the pacing, and nicey-captured shots of village life.

Bad dialogues let down the film, though, and the enthusiastic actors are all made to dole out cliches galore.

Like we said, Tanish tries. He's worked on his body a bit, and is okay with the fierce expressions. But then, he's not yet convincing as the leading man, thanks mainly to his voice. Also, his chemistry with the heroine is quite disappointing.

And you don't find it abnormal that Roja plays her tough-mom role to far more threatening effect than Abhi. She wields the sickle, spews filmi threats to the goons, and issues orders with as much panache as any self-respecting on-screen Seema warlord would.

The heroine looks pretty, but has nothing to do. However, it's quite refreshing to see her all covered up in a half-saree. It's only in the songs that she has needed to be bolder than that.

M S Narayana's comic track is quite funny, and Abhi's sidekicks do a decent job of delivering the laughs as well. MS is, in fact, one of the reasons this film comes close to being a good entertainer.

The villains are suitably evil; although Bapineedu's act of cutting his wife's tongue, and the savage villain in the end could have been done away with. The rest of the cast is good as well.

Kodi Punju is a one-time watch, and the best thing it has going for it is that it doesn't oversell itself.
Share. Save. Connect.
Tweet
KODI PUNJU SNAPSHOT

ADVERTISEMENT
This page was tagged for
kodi punju movie
Kodi Punju telugu movie
Kodi Punju reviews
release date
Tanish, Anchal
Follow @fullhyderabad
Follow fullhyd.com on
About Hyderabad
The Hyderabad Community
Improve fullhyd.com
More
Our Other Local Guides
Our other sites
© Copyright 1999-2009 LRR Technologies (Hyderabad), Pvt Ltd. All rights reserved. fullhyd, fullhyderabad, Welcome To The Neighbourhood are trademarks of LRR Technologies (Hyderabad) Pvt Ltd. The textual, graphic, audio and audiovisual material in this site is protected by copyright law. You may not copy, distribute, or use this material except as necessary for your personal, non-commercial use. Any trademarks are the properties of their respective owners. More on Hyderabad, India. Jobs in Hyderabad.